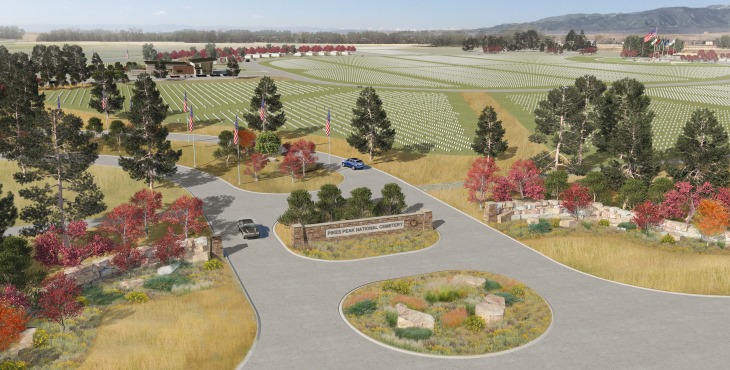 VA’s National Cemetery Administration continues a proud legacy as we dedicate Pikes Peak National Cemetery on Friday, May 25.  The dedication signifies our nation’s on-going commitment to care, in perpetuity, for the men and women who served with distinction in the U.S. armed forces.

In President Abraham Lincoln’s Gettysburg Address, he said, “from these honored dead we take increased devotion to that cause for which they gave the last full measure of devotion.”

During the ceremony, Under Secretary for Memorial Affairs Randy Reeves will renew President Lincoln’s pledge to honor the unbroken line of American citizens who served and sacrificed in defense of our nation. It is a pledge current and future team members of Pikes Peak National Cemetery will commit to daily as they provide each Veteran’s final benefit with full dignity: we will forever commemorate the service and stories of our Veterans and their contributions to protecting and building our country.

The new 374-acre national cemetery will serve the burial needs of the 95,000 Veterans in the area for the next 100 years. VA is expected to complete as early as October 2018 an early turnover portion of the property along Drennan Road which will accommodate the casketed and cremated remains of Veterans, their spouses and eligible dependents.

When complete, Pikes Peak National Cemetery will be VA’s 136th national shrine and serve as a centerpiece for Veterans in the greater Southern Colorado area. It will serve as a gathering place on special occasions, especially Memorial Day, to pay tribute to the brave men and women who served our country during times of war and peace.

The cemetery will also be a focal point for greater volunteerism in the community. Veterans and non-Veterans, civic groups and youth organizations will contribute toward fulfilling our nation’s final promise to maintain this cemetery as a national shrine.

The opportunity to honor the service of Veterans is a sacred trust – a part of VA’s historic mission, found in the words of President Lincoln, “to care for him who shall have borne the battle.”

I am indebted to the Veterans and civic groups that have been a vital part of our efforts to establish this national cemetery.  With strong partnerships forged in the community, we are honored to host this dedication ceremony.