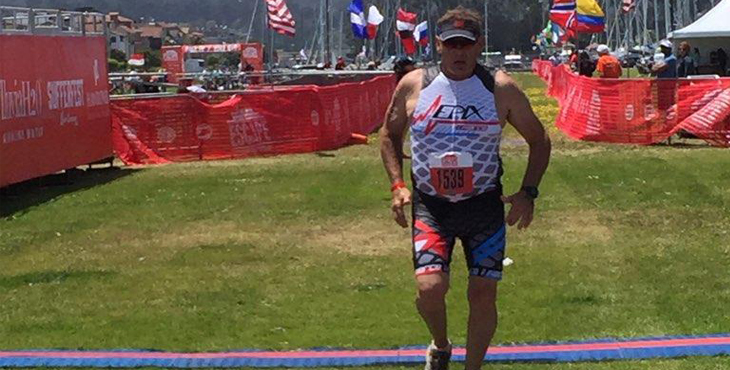 Two weeks after George Mink had both knees replaced, while in rehab at the St. Louis VA Medical Center one of the specialists in charge of physical activity said to the lifelong athlete, “I heard that you’re talking about riding and running with your knees.”

Mink said “yeah absolutely, I’m just counting down the days until these babies get better.”

She said “I’ll tell you what,” and she went and got a three wheeled bike and brought it to his hospital bed.

She helped Mink get on the bike and rode him all around the hospital.

On June 3, less than three years after surgery, he completed the Escape from Alcatraz triathlon. The event, considered by triathletes from around the globe to be an ultimate test of endurance, features a 1.5-mile swim from Alcatraz Island, a grueling 18-mile bike ride through the San Francisco hills, and a demanding 8-mile run through the trails of the Golden Gate Recreational Area.

And Mink is very appreciative of how VA has enabled him to continue to pursue his passion.

“I feel like I’m getting better care at the VA than I would in a civilian hospital,” he said.

“One of the cool things about the what the VA has done is they’ve been behind me a 100 percent,” Mink said. “They’ve said you can do this and this is great. There has not been one obstacle that they’ve held me back on they just keep telling me you can do this. Go for it. I wouldn’t be here today if it wasn’t for them.”