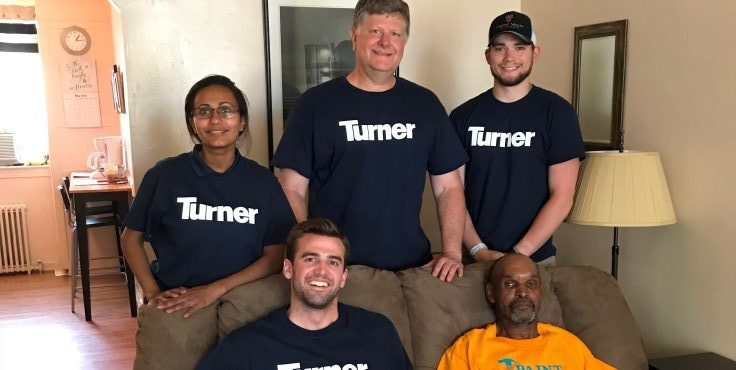 When he left the Army, Robert Dandridge never imagined that health and employment challenges would eventually lead to chronic homelessness.  He navigated years of housing instability until seeking and receiving help from VA.  And then Turner Construction stepped up to help make his new apartment a home.

Dandridge left the comfort of his parents’ home and his community in Washington, D.C., to answer the call to serve his country. In 1973, a few years after graduating from high school, he enlisted in the Army, endured the physical and mental rigors of basic training, completed airborne school and became a paratrooper in the 82nd Airborne Division, stationed at Fort Bragg from 1973 until 1976.

“You have to be brave and physically and mentally tough to qualify to jump out of planes in combat zones” said Dandridge. “Earning my silver wings and joining the elite airborne family remains one of the highlights of my life.”

In 1976, Dandridge proudly completed his military service and returned home to Washington to find work. Despite having an honorable discharge and a variety of marketable skills, he initially had difficulty finding a job that paid a decent wage. He bounced from job-to-job, with most barely paying enough to cover the essentials – food and shelter. As a result, he suffered brief bouts of homelessness between 1977 and 1992 but always managed to quickly get back on his feet.

In 1992, things began looking-up. Dandridge secured a job as a cook that paid enough to meet all of his expenses.  From there, he moved on to a better job as a maintenance worker at a small private school in Washington that paid even more.

Unfortunately, in 1996, he lost his job and was unable to find another, which began a spiral into chronic homelessness and health challenges that lasted 16 years. In late 2012, however, he sought benefits information at the Washington, D.C. VA Medical Center and mentioned that he was homeless. VA staff immediately referred Dandridge to their Community Resource and Referral Center (CRRC) – a 24-hour drop-in center for Veterans who are homeless or at imminent at-risk of homelessness that is staffed by VA physicians, social workers and case managers.

The center’s staff immediately attended to Dandridge’s medical needs and helped him secure transitional housing. In 2015, he became eligible for a Housing and Urban Development-Veterans Affairs Supportive Housing (HUD-VASH) voucher, which partially subsidizes the cost of market rate housing so low-income Veterans who qualify can afford to pay rent. To complement the housing subsidy provided by HUD, VA provides ongoing case management and wraparound service to help ensure participants in the program remain stably housed.

In December 2015, Dandridge moved into a cozy apartment in Washington and never looked back.

“The feeling of putting the key in the door of my own place after living on the streets, in shelters, and in-transitional housing off-and-on for years was indescribable,” said Dandridge.  “I was overjoyed when I moved in and I will be forever grateful for what VA did for me.”

Still, something was missing. Because he could not afford furniture — a common problem for homeless Veterans moving into permanent housing — Dandridge lived in a nearly empty apartment for more than two years. He had the barest of necessities.

That’s when representatives from Turner Construction swooped in. They were looking for a community service project for the company’s 2018 Founders’ Day of Service. After learning about Dandridge’s situation, staff in Turner’s Washington office committed to doing everything they could to help make his house a home. They delivered furniture, hung pictures on walls, laid carpets and installed an entertainment system.

“I believe our employees embrace the opportunity, responsibility and necessity to serve others, especially those who have given so much. Sharing of these beliefs is what our company culture is all about – it connects our employees to each other and directly affects our capability to work together in an outstanding way to build amazing construction projects,” said Carolyn Ellison, Turner Construction director of community engagement and citizenship. “It was indeed our honor to serve Dandridge. We look forward to doing more.”

VA salutes good corporate citizens like Turner Construction that—with no fanfare or press attention—pitch-in to improve the lives of Veterans. Dandridge said he went from living in an apartment with no furniture to having a place he’s proud of.

According to Daryl Puryear, VA peer support specialist, projects like the Turner Construction Day of Service are important, because they remind Veterans that their fellow Americans value them and have not forgotten about the enormous sacrifices members of the armed services make for the American people every day.

“In my experience as a VA employee, Veterans love America,” Puryear said.  “It’s awesome when Americans show Veterans that they love them back.”

Learn more about VA programs for homeless Veterans at www.va.gov/homeless.

Veterans who are homeless or at imminent risk of becoming homeless can call or visit their local VA medical center, where VA staff are ready to assist. Veterans and their families can also access VA services by calling 1-877-4AID-VET (1-877-424-3838).