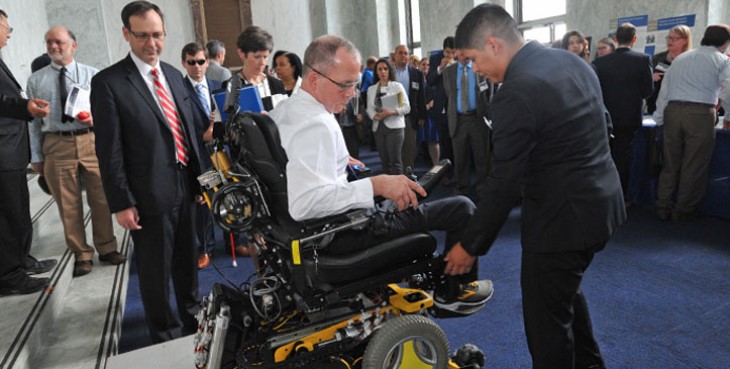 Above: Acting VA Secretary Peter O’Rourke observes a demonstration by Dr. Rory Cooper, a pioneer in wheelchair and other adaptive technology.

VA scientists descended on the nation’s capital to showcase their medical research advances that are aimed at improving the lives of Veterans.

More than 20 scientists attended the VA research fair on Tuesday, exhibiting a myriad of innovations in the foyer of the Rayburn House Office Building in Washington, D.C.

Acting VA Secretary Peter O’Rourke and VA Deputy Under Secretary Dr. Carolyn Clancy, as well as congressional staff members and representatives from Veterans’ organizations, were on hand to see the display of VA ingenuity.

“VA research is playing a key role in our efforts to transform health care for the Veterans we serve,” Clancy said. “VA research drives the innovations that improve the lives of Veterans, like advanced prostheses, telehealth, and better treatments for mental health conditions and substance use disorders. This is a small sample of the entire population of VA researchers but carefully selected.”

Friends of VA Medical Care and Health Research hosted the event, which was organized by VA’s Office of Research and Development. The Friends of VA is a nonprofit group that helps Veterans receive high-quality health care, hosts events that highlight VA’s research successes.

One of the researchers was Dr. Joanne Kirchner. She’s a psychiatrist at the Central Arkansas Veterans Healthcare System who is involved with the Quality Enhancement Research Initiative, a team-based behavioral health care program.

“This is a very good way to convey the story of what we do as VA researchers,” Kirchner said. “This is a better way to answer the questions of the people who are concerned with what’s going on with Veterans.”

At least three disabled Veterans attended the event to discuss technologies or forms of therapy that they are involved with through VA research.

Navy Veteran Joseph Bailey Jr., demonstrated use of a powered walking assistance device called the Keeogo. The device can only be used by people with some walking ability. Bailey, who has spinal stenosis, said he can walk up and down inclines and run in short steps while using he Keeogo.

Army Veteran Millard Landis spoke about his participation in a VA study that examines whether a mindfulness training program provided as part of routine diabetes care helps to alleviate anxiety and improve diabetes outcomes. Landis, who has Type 2 diabetes, said the program has helped keep his blood sugar level down by eliminating stress. He described it as a form of meditation.

Landis takes part in the mindfulness program at the VA Pittsburgh Healthcare System. He praised the VA for what it has to offer.

“I’m proud of the treatment that I’ve gotten at the Pittsburgh VA hospital,” Landis told the crowd. “I don’t think anything needs to be fixed in the VA system. I think people should just continue to pay attention to it and believe in it.”

About the author: Mike Richman is a writer and editor for VA Research communications. His email is Michael.richman1@va.gov.