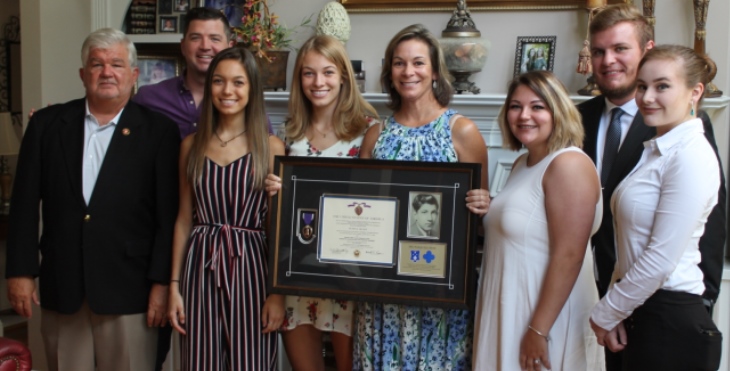 Giving back and paying it forward are both concepts that many of us complete on a daily basis.  It’s just a matter of fitting that time into your busy schedule or being completely spontaneous.  With three kids at home, a full-time job that requires me to be on the road travelling up to 18 days a month, my time is precious.

We all have to be conservative with which projects we take on, and one of those worthwhile charities I dedicate my time to is Purple Hearts Reunited, started by Zach Fike, who is an Army major and Purple Heart recipient himself.  If you take a moment to read his background and hear his story, you will see why he was nominated as Soldier of the Year by the Army Times.

Purple Hearts Reunited is the only organization in the country returning lost or stolen medals to Veterans and military families at no cost. The non-profit organization spends a considerable amount of time researching and locating the original recipient of the medal or family and, when possible, conducts a “Return Ceremony” to reunite the Veteran or family with the medal.

Fike’s passion to reunite lost medals of valor from our Veterans to their descendants will spark almost divine spiritual moments among these families and bring history and sacrifice to the forefront.  In many cases, these families didn’t even know about grandpa’s brother who was killed fighting the Japanese or Germans and died at age 18.  His history stopped that day when he paid the ultimate price for our country. Rediscovering medals from fallen Veterans brings their stories back to life.  No person is truly gone as long as their memory is passed down and honored.

Last week, we were able to return Pfc ”Pat” Pepe’s Purple Heart to his niece Donna Carpenter and nephew Mike Pepe.  Pat was one of three children, with a younger brother Al and sister Rita.  A replacement medal was acquired, and Purple Hearts Reunited framed and presented the award to the family.

Here are the details about Pepe’s service as provided by Fike to the family:

“Pfc. Pasquale “Pat” Pepe was born 12 April 1922 in Fayette County, Pennsylvania to Italian immigrants Michele Pepe and Mary Carmen Marfangel. He grew up in the Bronx and attended one year of college before being inducted into the Army on 10 December 1942. He was assigned to Company M, 351st Infantry Regiment.

The 351st Infantry Regiment was activated July 1942 at Camp Gruber, Oklahoma as one of three regiments forming the 88th Infantry Division. The regiment was comprised of selective service personnel and was the first all-draftee unit to see combat in WWII. It was sent to the Mediterranean Theater where it engaged in operations on the Italian Front from early February 1944 to the close of hostilities in May 1945.

On September 23rd, 1944 the regiment moved to the line and attacked Maraduccio Italy. Upon capture of the city they continued to Castel del Rio, where they engaged in a pitched battle. Castel Del Rio was the regimental objective. It was here that the 132d German Infantry, commanded by Major Leitner, had its command post located in a castle from which the town derives its name.

On 25 September 1944, during the attack of the castle, Pfc. Pasquale “Pat” Pepe lost his life in defense of our county and the liberation of his parent’s homeland. He was returned to New York on 26 November 1948 and was interned at Long Island National Cemetery in Farmingdale, New York.”

If bringing history to life is something you might be interested in, please contact Jessica Jaggars at Jessica@purpleheartsreunited.org and apply to be a member of the Valor Guard.  We are always looking for fellow Veterans to experience this incredible journey of bringing history alive.

About the author: Lt. Col. Mitch “Taco” Bell joined the Marine Corps in 1986 and was winged a naval aviator in January of 1991. He flew the KC-130 in Cherry Point,  North Carolina, Okinawa Japan and Fort Worth, Texas in the Reserves. His primary duty has been recruiting for nine of his 29 years in the Marine Corps. In 1998, he left active duty, was hired by American Airlines, and currently flies as a captain on the Boeing 737 around the United States. As a Reservist, he ran an old Mig Base in TQ Iraq from 2005 to 2006 and worked with the Afghan Police for 8 months in 2008 and again for a short tour in 2009 with Prison Corrections in Afghanistan. Bell currently assists with numerous charities and Veterans organizations in the Dallas-Fort Worth area. He directs the Purple Hearts Reunited Valor Guard, a return team dedicated to delivering lost medals of valor across the country. In addition, Bell has conducted return ceremonies himself, on behalf of Purple Hearts Reunited.