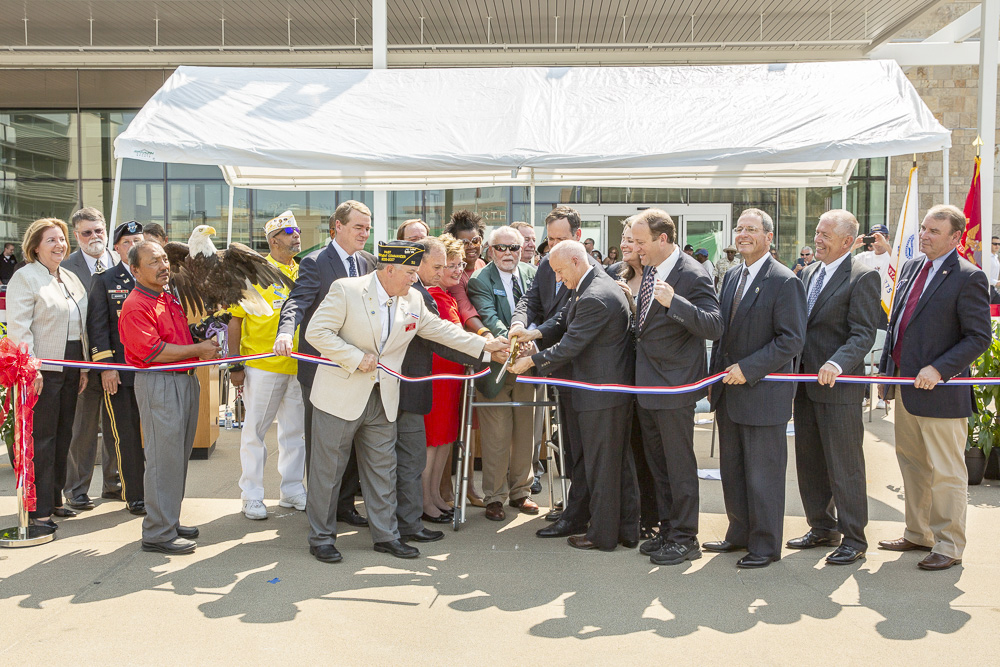 A ribbon cutting ceremony for the long-anticipated completion of the new VA hospital in Colorado drew hundreds of Veterans, VA employees and politicians. The Rocky Mountain Regional Veterans Affairs Medical Center located in Aurora, replaces the original hospital in Denver which was built more than 60 years ago.

“A promise was made to Rocky Mountain veterans and today we are delivering on the promise,” said Acting VA secretary Peter O’Rourke during his keynote speech Saturday.

The 1.2 million square-foot state-of-the-art facility will serve more 390,000 Veterans and will offer services including a 30-bed spinal cord injury clinic, aquatic therapy, mammography and PET scans for cancer and prosthetics. There will also be expanded telehealth services, polytrauma and a traumatic brain injury unit located on the 31-acre site. The hospital also includes 900,000 square feet of parking space for staff and patients.

He also talked with Veterans who receive services from the current Denver facility, including 102 year-old WWII Veteran, May Alm, who was a member of the Army Nurse Corps and served as a VA nurse in Washington until 1981. O’Rourke, Alm and her daughter Marie had a spirited conversation.

“Alm is living testament to the honorable men and women who put their lives on the line to defend this great Nation,” O’Rourke told the crowd during the ribbon cutting ceremony.

The acting secretary also visited with Marvin Meyers, who was an instrumental force and advocate for the building of the new facility. The 89-year-old previously served as president of the United Veterans Committee of Colorado and is a longtime member of the organization. Meyers told O’Rourke that he was both encouraged and excited about the opening of the Rocky Mountain Regional Veterans Affairs Medical Center.

“The time has come to move forward while providing our Veterans the best quality care and the latest technology,” O’Rourke told the audience. “Today we open a state of the art facility here in the Denver region and embrace a continuously transforming and evolving health care landscape.”

The Rocky Mountain Regional VAMC will officially open for outpatient services on July 27 and current Denver VA patients will be moved to the facility on August 4.