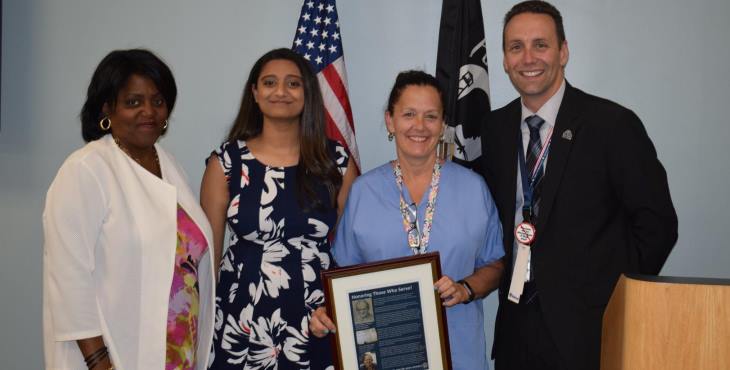 More than 100 Veterans, VA employees and members of Veteran service organizations participated in a town hall and open house last week at the VA medical center in Manchester, New Hampshire.

The event was designed to celebrate the hospital’s recovery and expansion of services after undergoing a complete overhaul following a catastrophic flood last year. The facility’s conditions and the delivery of health care to Veterans has significantly improved since then.

“Big successes like we’re seeing for Veterans here in Manchester are always about collaboration and partnership,” said Acting VA Chief of Staff Jacquelyn Hayes-Byrd during her keynote speech at the July 19 event.

Under the guidance of the facility’s director Al Montoya, a first-of-its-kind private-public practice was created, allowing VA providers in Manchester to treat Veterans within private community hospitals. The arrangement made it possible for Manchester VA to provide Veterans uninterrupted access to the right care, in the right place at the right time. New Hampshire Governor Chris Sununu signed an executive order that was necessary to legally allow VA providers to practice in area hospitals.

“At its root, the change we’ve seen here has been about saying yes to Veterans,” said Hayes-Byrd during the town hall.

The acting chief of staff used the visit to speak with Veterans including a U.S. Army Veteran who posted the following thoughts on Facebook after spending nearly an hour with Hayes-Byrd.

“I’m completely blown away by what I saw tonight at the VA Hospital Manchester. A year ago this place was probably not people’s first place to go or even consider for that matter.

Within a year this team led by one of the most caring and thoughtful men I have ever met in my life has turned this community into what it deserves. So much that even Washington notices it, and in my eyes that’s a huge success.

The acting chief of staff for the Department of Veterans Affairs Jacquelyn Byrd was there an after the meeting I went up to talk to her about something I had on my mind that I couldn’t share in a room full of people that I didn’t know. This woman took the time, almost probably 45 minutes sitting down talking to me Not only talking, but listening sharing her life with me and genuinely caring, not only about what I was saying, but also what my mom was saying.

To just have somebody that has that important of a role in the government sit and take the time to talk to you it just shows the caring and compassion that she has and it left me speechless. I think Washington could use a lot more of that, but to sit and talk to her and the director of the VA at all at the same time I was overwhelmed with emotions and to see the both genuinely caring was such a great example of leadership compassion everything that the VA stands for.

I am glad that Washington recognizes how much he is done for the hospital, just don’t take them from us. There a lot of veterans that need somebody like him to have their back because I know he’s had mine on more than one occasion. So, I am proud to be a part of the Manchester VA and I cannot thank them enough for everything that they do for me almost on a daily basis.”