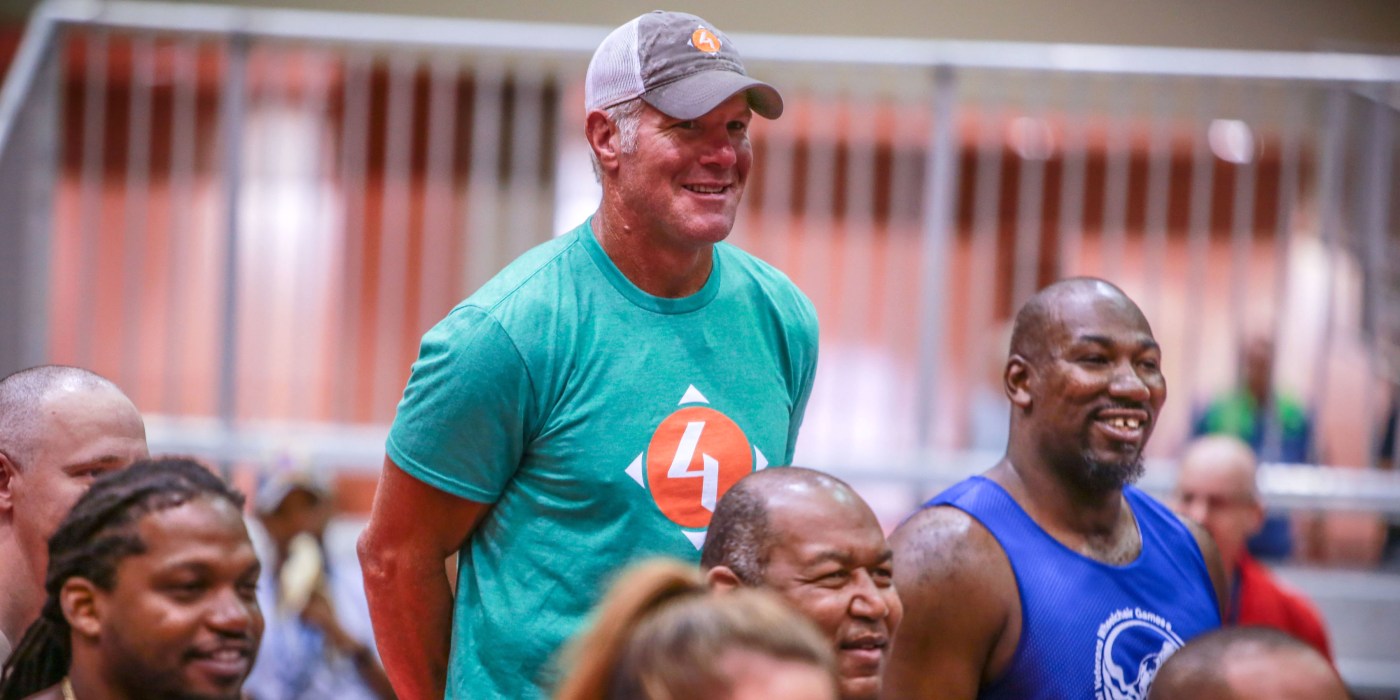 Green Bay Packers legend Brett Favre has lots of numbers from his football career – 6,000 completed passes for 70,000 yards and 500 touchdowns. But one lesser known number may have prevented him from playing at all. He broke a vertebra and lost 3 feet of intestines after a car accident before his senior year of college.

But Favre, a pro football Hall of Fame quarterback, told a crowd at the 38th National Veterans Wheelchair Games that nothing he’s experienced can compare to the adversity faced by the 657 people on hand for this year’s event.

Favre was a special guest speaker at the opening ceremonies before an exhibition basketball game between paralyzed Veterans and celebrity players. He also checked out a wheelchair rugby clinic during his visit.

Army Veteran Jimmy Green is excited to meet Green Bay Packers legend and Hall of Fame quarterback Brett Favre. Favre was a guest speaker at the opening kick off of the 38th National Veterans Wheelchair Games.

“There’s a great deal to be thankful for.”

For all of Favre’s football success, it may not have happened had that car accident been worse, he said.

“I was in a car wreck prior to my senior year in college. Broke a vertebra in my back and had 3 feet of intestine removed,” he said. “I had surgery on Aug. 8, and I’d like to say youth played a part in the recovery. On Sept. 8, I was the starting quarterback against Alabama and we beat them.

“I’d like to say I was responsible, but I played like I just lost 3 feet of intestine,” he laughed.

Favre spends a lot of time these days with his charity 4Outdoors – named after the number on his football jersey. Although it started as a program to get everyone involved in hunting and the outdoors, it has taken on special meaning as he’s met some disabled Veterans. He has since partnered with Petco to help connect Veterans with service animals with Dogs 2 Dog Tags.

“Some of these guys have a tough road and I really commend them. [The charity] didn’t start out that way. I was asked to visit some hospitals, and how do you say no to that? Dogs 2 Dog Tags has just been a humbling, rewarding experience. It makes you feel like you’re helping, but it really helps you in your everyday life to look at things differently.

“To VA and all Veterans and those here at the National Veterans Wheelchair Games, much respect and much love for you.”