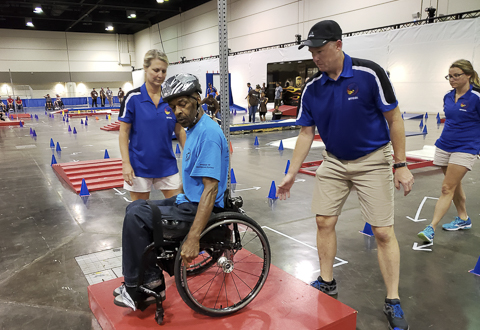 The bullet is still in Mike Thomas’ back and the wheelchair is a constant reminder of something he’ll never forget.

“It’s lodged right in the spine, but doctors can’t remove it, or it will cause more damage,” he said. “It happened in Detroit. Just living in Detroit, big city life.”

Thomas, who gets his care at the Milwaukee VA Medical Center, was in the wrong place and time when a random, stray bullet left him paralyzed from the waist down almost 20 years ago.

How do you get over that?

Thomas is one of more than 600 Veteran-athletes to compete recently in the 38th National Veterans Wheelchair Games, in Orlando, Florida.

He is a fierce and independent competitor, but it hasn’t been easy. He says his recovery and attitude is a work in progress.

“I am angry at what happened. How can you not be angry? But a lot of people helped me on that,” he said.

“I spent 34 days in rehab in Detroit,” said the Army Veteran who served in Germany from 1975 to 1977. ”The therapist there was good at his job. I don’t think I was an easy guy to get along with before. Set in my ways. And when he brought that chair to me, I wanted to kill the world. He put up with me.

“That rec therapist before I left Detroit, he got under my skin. He dared me to go to the (National Disabled Veterans) Winter Sports Clinic, and I did. Was hooked ever since then.”

That’s where he learned about some of the other adaptive programs available to Veterans.

“The old-timers used to have tradition, a friendly thing with the staff guys and all the people who worked as instructors. They would play a basketball game against the Vets. That’s pretty much the first time I saw basketball.

“I took some coaching. It took me some time but one of the guys told me I was getting pretty good in the chair. Been coming to the Games ever since.”

He moved to Wisconsin when he found out the spinal cord-injury care was among the top in the nation, and he met Dr. Ken Lee, who is now the Milwaukee VA Spinal Cord Injury Center director. Lee himself was injured in a roadside bomb in Iraq and tries to get as many Veterans as possible into adaptive sports.

“He’s an awesome guy,” Thomas said. “I knew him before he deployed and before he was in charge. He’s one of the smartest guys I know. He knows his stuff. When he is telling you something, you know it’s right.”

Lee said the Games help with the anger Thomas feels.

“Mike has come a long way, but still has those dark moments. He still has those strong feelings about his injury, which makes it hard to move on,” Lee said. “Because he holds on, he struggles, but what is unique about the Games, and we see this all the time, is if someone is in a funk, they start to prepare and practice for their events and they feel better. And then they get here and it’s a real camaraderie and spirit. It’s people helping people. It’s Veterans helping Veterans.

“That carries on for awhile and we hope that rejuvenates people,” Lee added. “We give them the weapons and ammo to get better and to fight. That’s what I always tell Mike and all our Veterans.”

Thomas has expanded beyond VA’s adaptive sports and is part of the National Wheelchair Basketball Association where he plays on a Division II team.

His go-to sports at the Wheelchair Games are softball, basketball and slalom – a grueling, timed obstacle course that puts athletes through a series of challenges, including greased, uneven surfaces and narrow passages.

It’s not easy. And that’s what Thomas likes.

“I love all these games. I love getting in the other guy’s head.”

He’s also been on the board of the Wisconsin Paralyzed Veterans of America and does what he can to help other, newly injured Veterans.

But if you’re looking for someone to sugarcoat or pull punches, look elsewhere.

“You can have a pity party for 30 days,” he said. “Then you gotta try. If you want to try, I’ll go all the way with you. I’m like an old-timer now. You got some guys, when they first get hurt, I screw with their minds. I intentionally try to piss them off and rile them up and get them motivated.

“I see some of these guys here (at the Wheelchair Games). I remember when they were the new guys, and now they love this. They’re my crew. I broke them in. You see them later, and they’re doing good, they’re taking it good.

“But if people want to feel sorry for themselves, I can’t help them.”

Thomas wants others to know one thing about him and people like him in a wheelchair – he can help himself.

I’m doing my shopping and wanted to get a box of waffles off the shelf. A lady, she was so nice and meant no ill intent. She reaches and grabs it for me. Now, in my brain, that pisses me off. But I know she didn’t mean anything. She left and I put them back. I want to get those waffles.

“Another guy, I’m minding my own business, he means nothing bad. He asks, ‘Can I help you get the door?’ and I think, ‘No, can I help you?’ I’m capable. I can help myself.

Thomas looks off and seems lost in his thoughts for a few seconds.

It’s been 20 years since a stray bullet put him in a wheelchair. A lot of years. A lot of emotion.

“ … It’s just, I’m probably always going to be pissed. I’m better at not taking it out on the world.”

And he knows there is a lot more to himself than a man in a wheelchair.