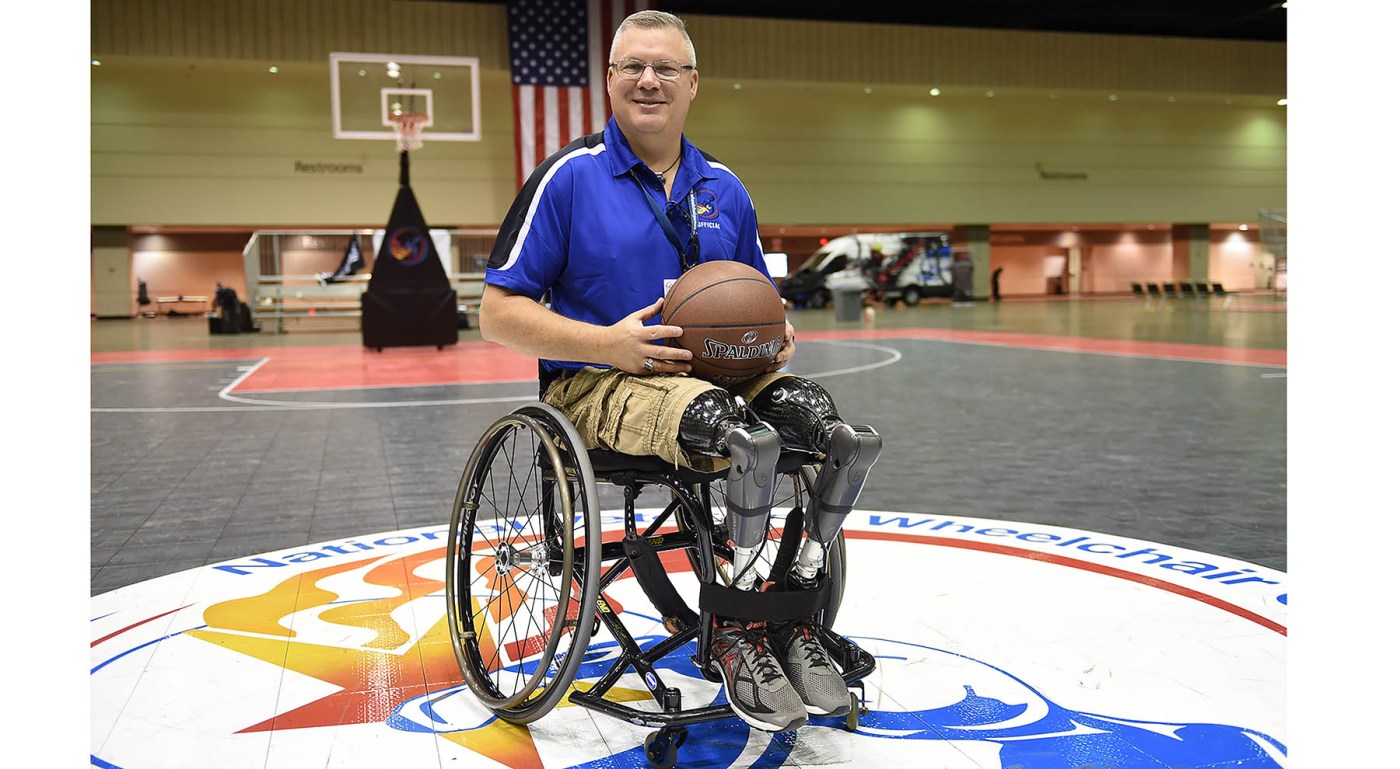 Steve Doudt took a step and jumped into nothing. It was one of the last steps he’d take with his own legs.

And like the five before them, it was flawless.

Then he got on his motorcycle, merged on a highway and the car never saw him.

“The car rode me into the guard rail and threw me,” he said. “Never lost consciousness. I laid there for what seemed like a few minutes. Tried to sit up and get up, and realized my legs were broken really bad.

“The fire truck actually showed up first. They loaded me right into the fire truck to take me to the hospital.”

Four months later, the doctors could do no more.

And that’s the day Steve Doudt stepped his life in a new direction.

“I do 85 to 90 games a season – the collegiate division, all the adult divisions, junior division … My wife is a basketball widow. I average every other weekend on the road.”

Doudt said he never hesitated when his life took that unexpected turn in July 1992.

“I was 6-foot-3 and 200 pounds and dropped down to 98 pounds in the hospital. Had compound fractures in my tibia and fibula in both legs. The infections in my body were literally sucking the life out of me.

“The decision was made, and it was night and day. Honestly, I had been in a lot of pain. There was a lot of pain trying to get the bone to grow back together. There were several millimeters of bones that were completely gone,” he said. “We did the amputation and I started getting better right away.”

There was no time to wallow in self-pity.

“I think Special Ops just has a different mindset,” he said. “For me, this was just another challenge, if that’s the right word. It was another obstacle to overcome and I just did it. I just went a totally different road, different career, and got involved with disabled sports.”

He played wheelchair basketball for 10 years, got involved with the sitting volleyball national team and played in the Paralympics. Along the way, he met his wife and they have three children: Matthew, 29, who is in the Navy; Casey, 23; and Jason, 16. They also have three grandchildren.

“When I first got hurt, the prosthetics they had were pretty rudimentary. The equipment really started to explode and get better around 2008. Guys were getting injured in the war, and companies needed to step it up. Me, I spent six to eight months in the hospital. Now these guys can get new equipment, daily rehab and they can get up and walk out of the hospital.”

But it takes more than good prosthetics to get on with life. It’s easy to fall into a funk if you don’t have the right attitude, he said.

“My job now is, I want to help some of these new guys out. Twenty-five years ago, I didn’t have the guidance. Had to figure this out because the system wasn’t ready. If you don’t know who to ask, it’s easy to get frustrated and that leads to other issues like depression and anger.”

That’s why he is an important part of this event, said Dave Tostenrude, director of the National Veterans Wheelchair Games.

“He’s been a great addition to the crew because he is such a role model in the wheelchair basketball community. We brought him on to provide great competition, but to also help with the education and links our Veterans need when they go home.

“We’re just the launching pad to the other 51 weeks out of the year,” Tostenrude said. “We know people who get involved and come here are more engaged with work and school and they spend less time in the hospital the more they are involved in adaptive sports.

“We can say that, but when Steve says it, he’s a peer. They see what he’s done in his life and in his career and he’s a role model. He’s been successful. He’s living the life. There’s much more credit in it when he says it.”

Doudt’s advice to his fellow Veterans is simple – get moving.

“What I tell people is, ‘Get yourself around like-minded people, whether it’s a support group or some other organization like Paralyzed Veterans of America or Disabled American Veterans,” he said. “If you get around someone with similar disabilities, they can help you through the process. Come at it with the best attitude and not laying down. Some guys will struggle and struggle, but that all changes when you get out and get active.”