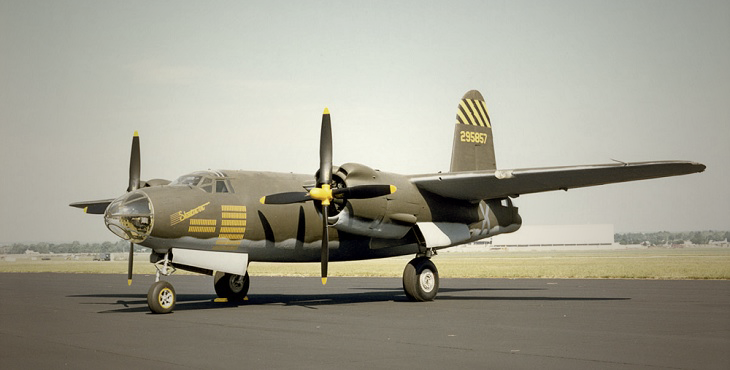 1st Lt. Terence Patrick Halligan served as a navigator aboard a B-26 Marauder during World War II.  During a combat mission over Italy in 1944, enemy flak tore through his plane’s wing prompting all crew members to bail before the aircraft crashed.  Though all of the crew safely reached the ground, enemy forces quickly captured Halligan.  He was never seen again.

[The full transcript to episode 121 is available here.]

Halligan was born in Northern Ireland on April 3, 1922.  Shortly after his birth, he and his family immigrated to the United States, settling in Bayonne City, New Jersey sometime before 1930.  The family moved across the Bayonne Bridge to Staten Island in 1935 and became naturalized U.S. citizens by 1940.

Halligan enlisted in the U.S. Army Air Corps on March 20, 1942.  He joined to the 320th Bombardment Group, 441st Bomb Squadron at MacDill Field in Tampa, Florida.  They deployed to Europe in December 1942, and flew missions mainly from Decimomannu Air Base on the island of Sardinia.

Halligan completed his first combat mission on February 21, 1944.  In the weeks after, he and his crew mates participated in frequent bombing missions with the primary objective of weakening German defensive lines in Italy to support the Allied push on the ground.

On March 16, 1944 Halligan flew his last mission.  He and his crew targeted gun emplacements in the town of Aquino, Italy near Cassino.  As their plane approached, anti-aircraft guns damaged the aircraft and forced the crew to bail out.  In the chaotic moments that followed, Halligan went missing.

The plane’s co-pilot later reported that all crew members successfully bailed out of the plane, deployed their parachutes, and reached the ground safely.  However, he notes that he never saw Halligan again once he reached the ground.

In another report, the plane’s bombardier states that he landed near Halligan and that they both appeared to be uninjured and alert.  German soldiers soon discovered both of them, took them prisoner, and separated them from one another.  It was the last time that any crew member ever saw Halligan.

The National Cemetery Administration furnishes memorial headstones and markers for deceased active duty service members and Veterans whose remains are not recovered or identified.  Today, Halligan is memorialized with a marker in Florida National Cemetery in Bushnell, Florida.

Please join us in honoring the service and sacrifice of 1st Lt. Terence Patrick Halligan.  We commemorate our Veterans, ensuring that their memory never fades and that their legacy never dies.