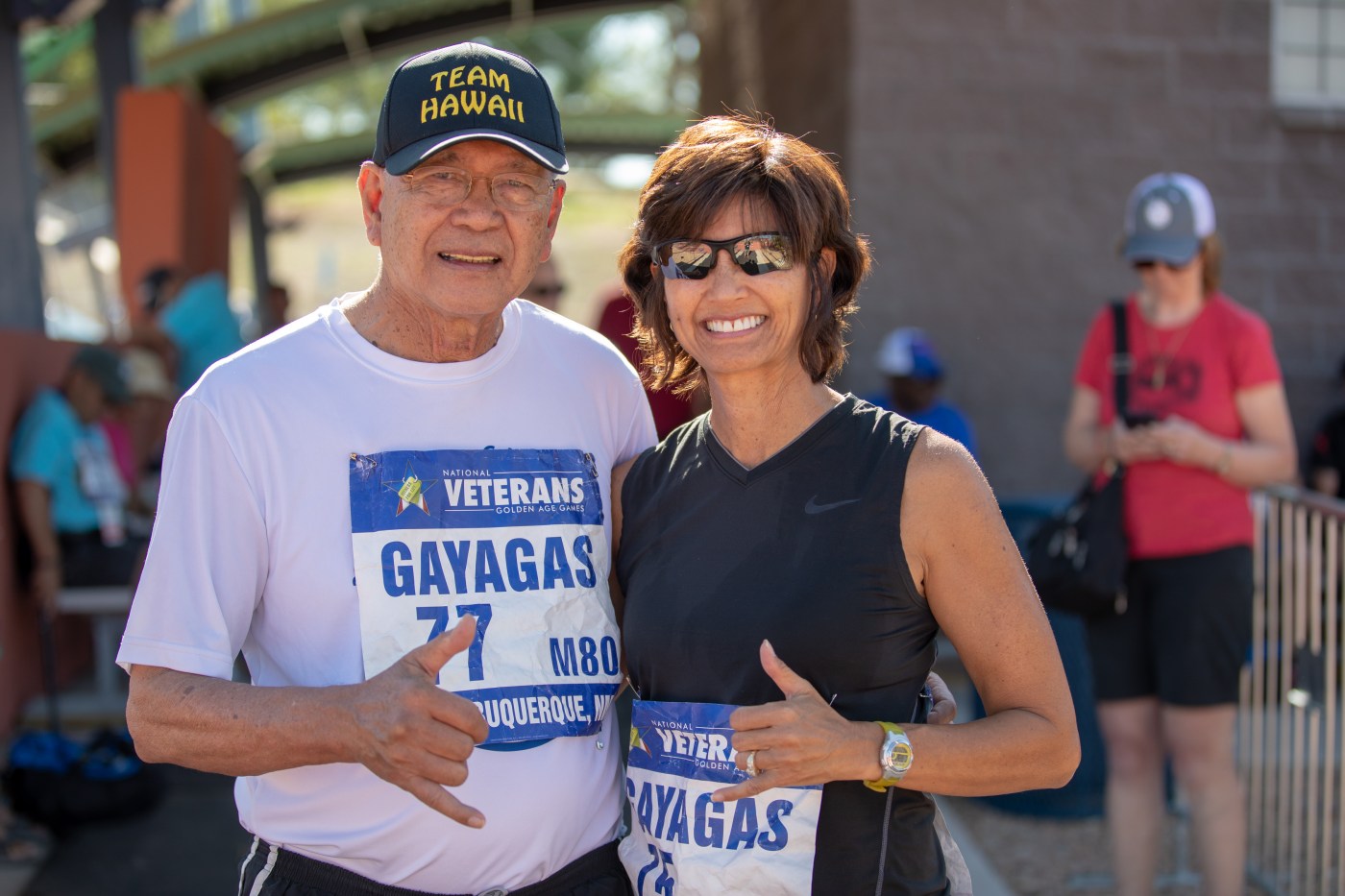 Ed Gayagas is competing in the National Veterans Golden Age Games for the eighth time. His participation, however, is more special than any time before.

Nearly a year ago, Gayagas was diagnosed with primary central nervous system (CNS) lymphoma, a rare cancer of the lymphatic system that can form in the brain and spinal cord. Lymphatic tissue are part of the body’s immune system. Doctors spotted a brain tumor, told him it was inoperable, and gave only a 4 percent chance of survival if it was untreated.

Gayagas, a retired Army colonel who served 30 years in the military, underwent eight rounds of chemotherapy, which is known to cause fatigue. But he found the energy to go for regular training walks and jogs. He also stayed active with three forms of martial arts: judo, taekwondo and ju-jitsu.

All along, Gayagas told himself he wouldn’t be denied a chance to display his diverse athletic talents at the 32nd National Veterans Golden Age Games in Albuquerque, which took place Aug. 4-8.

“When I first heard the news about the tumor, I was devastated because I work very hard to stay healthy,” said Gayagas, who is now 79. “But I was inspired to get better. I was very determined to overcome this.”

Army Veteran Ed Gayagas takes a swing from the bunker at the 2018 National Veterans Golden Age Games. At 79, the Hawaii native has completed his eighth year of participation at the games.

Gayagas is at the games as part of the Hawaiian contingent, and he has a family entourage: his wife, Norma Gayagas; his daughter, Crissy Gayagas, and his nephew, Earl Neconie. Like her father, Crissy is a retired Army colonel. Earl is a former Marine.

Crissy, in fact, is also participating in the Golden Age Games. She says seeing her father compete in Albuquerque is more remarkable than ever before, noting that he did well in his latest MRI (magnetic resonance imaging) exam but isn’t in full remission.

“We know how excited he’s been to compete in these games every year,” she said. “Then, his diagnosis last fall became the incentive for him to get better, to endure the chemo treatments. He did really well training for the games. That’s why despite going through the chemo sessions, he’s been able to come and compete.”

Ed Gayagas is a self-described “health nut” who’s been athletic for decades. He lettered in basketball and track at the University of Hawaii. He didn’t fulfill his dream by going to West Point but is proud to say that his son, Lincoln Gayagas, and Crissy both went there. Lincoln served for seven years in the Army and is now with the Army Corps of Engineeers. (All told, the Gayagas family has amassed 108 years of military service.)

After college, Ed Gayagas entered the 101st Airborne Division, an elite light infantry unit of the U.S. Army. In one of his stops, he was stationed at Long Bihn Post, an Army base in South Vietnam that came under heavy mortar fire during the Tet Offensive, a coordinated series of North Vietnamese attacks in 1968.

Today, while battling cancer, he’s busy moving from event to event at the Golden Age Games. He’s competing against other Veterans in the 80 to 84 age group because he turns 80 this year.

He likes all of his events but notes that his sport from high school and college, the high jump, isn’t offered at the games. He considers doing the 100-meter dash a “real challenge.” In a 100-meter heat on Tuesday, he posted the second-fastest time in his age group: 24.62 seconds.

“I never before ran the 100-meter dash, and neither did I do some of the other things that I’m doing here,” he said. “I was a high jumper for many years, not a sprinter. But based on the circumstances, sprinting is now my big sport.”

So don’t be surprised to see Ed Gayagas at the Golden Age Games next year. Once this year’s games are over, rest assured he’ll put it on his schedule for 2019.