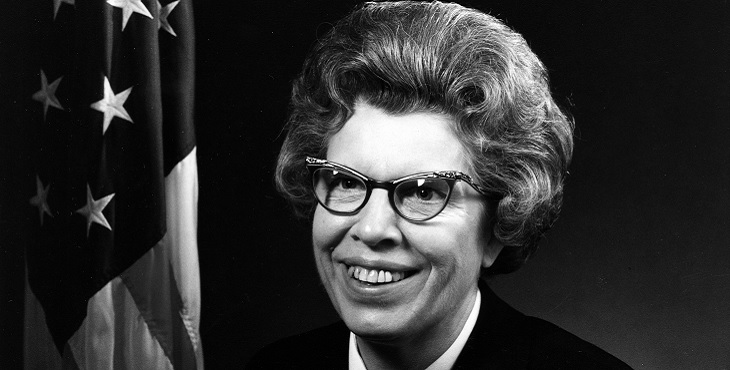 Rear Adm. Alene B. Duerk had a long military career and was a trailblazer for women in the Navy.  She is a Veteran of World War II, Korean War, and Vietnam War.  In 1972, she became the Navy’s first female admiral.

Duerk was born on March 29, 1920 in Defiance, Ohio.  She attended the Toledo Hospital School of Nursing and graduated in 1941.  During World War II, the American Red Cross needed nurses and frequently contacted Duerk because of her education.  She quickly grew a desire to want to help during the war which prompted her to join the U.S. Naval Reserve.

Her first assignment was at the Naval Hospital in Portsmouth, Virginia.  She spent about 6 months there before transferring to the hospital in Bethesda, Maryland.

In April 1945, Duerk boarded the Navy hospital ship USS Benevolence.  She departed on the ship from New York, passed through the Panama Canal and headed towards the Pacific.  The ship spent time at both Hawaii and Guam before joining the Third Fleet in preparation for the invasion of Japan.  However, the war ended before the planned invasion took place.

The mission of the USS Benevolence changed. Instead of participating in an invasion, the ship docked in Tokyo Bay and evacuated two prisoner of war camps in August 1945.  For the first 36 hours, Duerk and her shipmates processed nearly a thousand American prisoners of war before transferring them onto other ships going back to the United States.  Duerk remained on the ship in Japan which served as a hospital for the fleet until November 1945.

The following year, Duerk left active service and attended Case Western Reserve University in Cleveland, Ohio.  In 1948 she earned her degree in Ward Management and Teaching, Medical and Surgical Nursing.  She then began teaching nurses at Highland Park General Hospital and joined a Naval Reserve unit in Detroit.

The Navy called her back into active service in 1951 during the Korean War.  She was assigned to the Naval Hospital Corps School in Portsmouth, Virginia where she trained hospital corpsmen for about 5 years.  In 1956, Duerk became an education coordinator at Naval Hospital in Philadelphia, and later served at the Naval Recruiting Station in Chicago until 1961.

For the next ten years, Duerk served at multiple locations and held many different positions in the Navy.  She served in hospitals in Long Beach, California; San Diego; Yokosuka Japan; Subic Bay, Philippines; Chicago; and Washington, D.C.  She held supervisory positions at each of these assignments.

In May 1970, the Navy appointed Duerk as the director of the Navy Nurse Corps.  She helped push the recruiting effort to draw more women into the Navy and became a symbol of opportunity for women.  Duerk’s continuous climb in the Navy served as an example to other women showing what they accomplish in a military career.

On April 26, 1972 President Richard Nixon approved her selection to Rear Admiral.  She was promoted on June 1, 1972 and became the first woman selected to flag officer in the Navy.  Duerk continued to serve as the director of the Navy Nurse Corps for the remainder of her career.  She retired from the Navy in 1975.

After her military career, Duerk remained involved in nursing and continually advocated for advancements in the profession.  She served on the board of the Visiting Nurse Foundation for 25 years and established the Admiral Alene Duerk Endowed Scholarship at the University of Central Florida in 2006.  To date, the scholarship has been awarded to 69 students in the university’s College of Nursing.

Rear Adm. Alene B. Duerk passed away on July 21, 2018 at the age of 98.  She is interred at Cape Canaveral National Cemetery in Mims, Florida.

Please join us in honoring the long service and lasting legacy of Rear Adm. Alene B. Duerk.