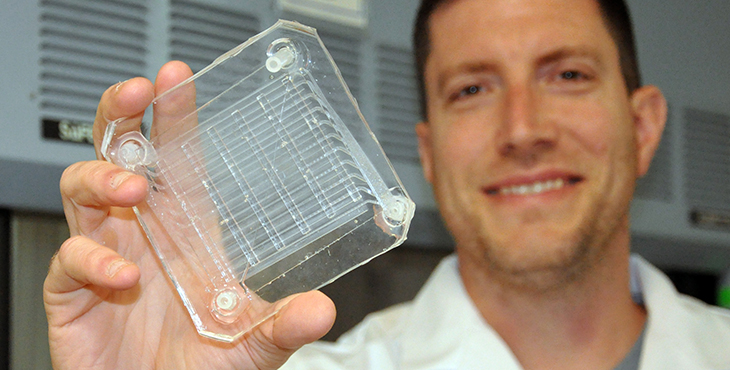 Above: Biomedical engineer Dr. Joseph Potkay, with the VA Ann Arbor Health Care System, displays a 2D prototype of an artificial lung. A 3D version is in production. (Photo by Brian Hayes)

VA scientists are working to create a 3D-printed artificial lung that they tout as having the potential to revolutionize the treatment of Veterans affected by lung disease.

One such lung disorder—chronic obstructive pulmonary disease (COPD)—is one of the most prevalent and costliest ailments in the Veteran population.

Dr. Joseph Potkay, a biomedical engineer at the VA Ann Arbor Health Care System in Michigan, is leading the VA-funded research. It calls for making a prototype of the 3D-printed artificial lung. Potkay and his team hope to build what they call the first wearable artificial lung that is compatible with living tissue and is capable of short- and long-term respiratory support.

The lung is seen initially as a temporary measure, a bridge to help patients awaiting a lung transplant or an aid for those whose lungs are healing. Future versions could have longer-term applications, the researchers say.

Potkay says this is the first time high-resolution 3D polymer printing is being used to create microfluidic lungs with three-dimensional blood flow networks.

Microfluidic artificial lungs, a new class of artificial lungs, mimic the structure of the natural lung better than conventional artificial lungs. Tiny blood channels, some thinner than a human hair, are closer in shape and dimension to those in a person, allowing for blood flow similar to that in the human body.

“We hope that these microfluidic flow paths and biocompatible coatings will be more compatible with living tissue, thereby reducing the body’s immune response and increasing the lifetime of the device,” says Potkay, who is also a researcher at the University of Michigan. “The flexibility in design afforded by 3D printing gives us more freedom and thus the ease to build artificial lungs with a small size and pressure drops that are compatible for operation with the body’s natural pressures.”