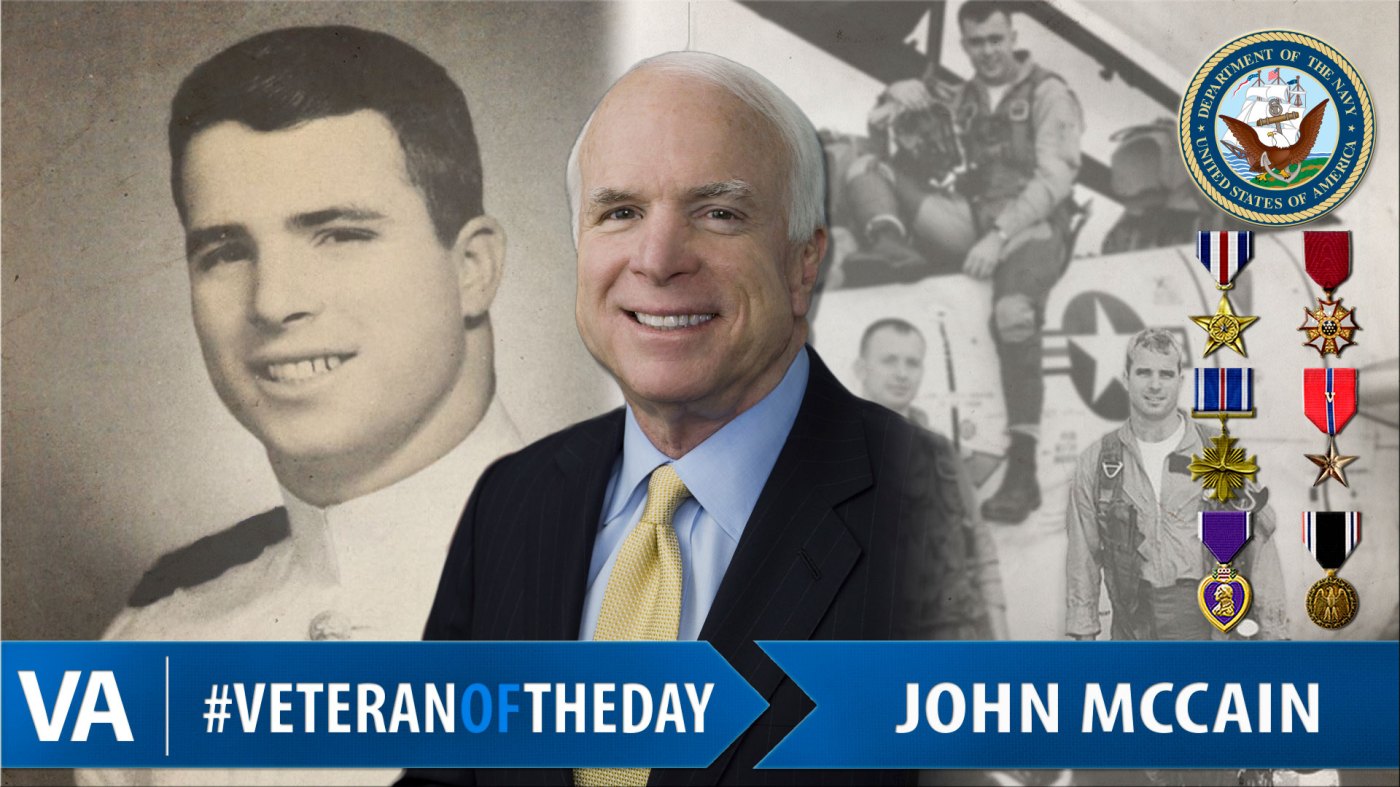 Today’s #VeteranOfTheDay is Vietnam Veteran and Senator John McCain. He served in the Navy from 1958 to1981 retiring at the rank of captain.

McCain was born in 1936 in the Panama Canal Zone and was the son and grandson of Navy admirals. McCain attended the U.S. Naval Academy, graduating in 1958. He trained as a naval aviator at Pensacola, Florida Naval Air Station and at Corpus Christi, Texas Naval Air Station. In 1960, he served in deployments to the Mediterranean on the USS Intrepid. He also deployed on the USS Enterprise, the Navy’s first nuclear-powered aircraft carrier. In 1963, he was assigned to Meridian Naval Air Station in Mississippi as a flight instructor.

In 1967, while deployed to Vietnam as part of Operation Rolling Thunder, McCain’s plane was shot down and he was captured by North Vietnamese forces. He was held at “Hanoi Hilton” and “the Plantation,” two camps nicknamed by American pilots. He was a prisoner of war for more than five years. He returned to Vietnam in November 1974 where he and other prisoners of war received the National Order of Vietnam. McCain also served as a Navy liaison to the U.S. Senate before retiring from the Navy in 1981.

For his service, McCain was awarded the Silver Star, Legion of Merit, the Distinguished Flying Cross, the Bronze Star, a Purple Heart, and the Prisoner of War medal. His name was added to the USS McCain which is also named after his father and grandfather.

McCain was elected as the U.S. Representative from Arizona’s 1st District in 1983 and was elected senator in 1986. During his time as a senator he co-authored legislation establishing the 9/11 Commission and sponsored legislation to strengthen airport security. He also was part of the bipartisan Campaign Finance Reform Act and a bipartisan effort to normalize relations with Vietnam.

McCain was diagnosed with brain cancer in July 2017. He returned to the Senate after his diagnosis to continue work as chairman of the Armed Services Committee. He passed away on Aug. 25, 2018, at the age of 81. He is survived by his wife, Cindy and seven children. He will lie in state at the U.S. Capitol and Arizona Capitol. In accordance with his wishes, he will then be buried at the U.S. Naval Academy Cemetery in Annapolis, Maryland.

Top Stories Veteran of the Day