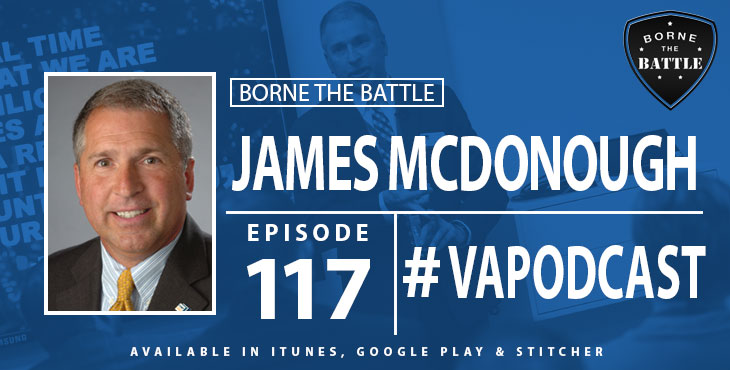 About 30 episodes ago, we spoke with Michael Haynie, the Founder & Executive Director for the Institute for Veterans and Military Families at Syracuse University. The IVMF is higher education’s first interdisciplinary academic institute, singularly focused on advancing the lives of the nation’s military veterans and their families. This episode, we hear from Mike’s colleague, James McDonough, managing director of programs and services for IVMF.

James tells us about his service in the Army, a great leader he served under, and the decision to begin transition out of the military so he could care for family. Then, we learn about two powerful programs worked on at IVMF: AmericaServes and Onward to Opportunity. AmericaServes is the country’s first coordinated system of public, private, and non-profit organizations working together to serve Veterans, transitioning service-members, and their families. Onward to Opportunity is a free, comprehensive career training, certification and employment program designed to launch you into your next career with over 30 industry-recognized career tracks and courses.

IVMF is a highly respected organization in the Veteran community, and James does a great job adding on to what we originally learned from Mike. Enjoy!

Following graduate school, he was assigned as strategic planner in the Office of the Chief of Public Affairs and then speechwriter to the Secretary of the Army, the Honorable Togo D. West, at the Pentagon in Washington, D.C. From 1995-1996 he served as battalion operations and later, executive officer,

McDonough was selected to command the 3rd Battalion, 43rd Air Defense Artillery Regiment, Fort Bliss, where he commanded from 1999-2001. In 2001, he was selected to attend the Army War College, Centennial Class, in Carlisle, Pa. Following the Army War College, he was assigned to the U.S. Military Academy at West Point, as professor of outreach at the Simon Center for the Professional Military Ethic.