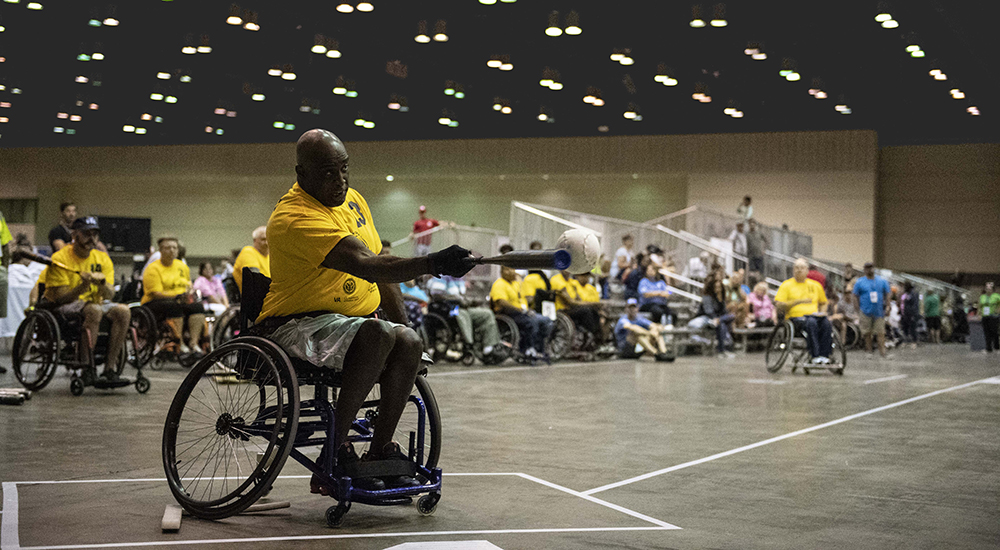 Army Veteran Keith Thompson (pictured above) is no stranger to conquering life’s challenges.

A 2006 motorcycle accident left the former firefighter in a 27-day coma and paralyzed from the waist down. Not one to be kept down, Thompson strives to be the best at everything he does and that paid dividends at this year’s National Veterans Wheelchair Games (NVWG) held in Orlando, Florida.

Thompson was awarded the prestigious Spirit of the Games trophy, an award presented to “the Veteran that through their athletic achievement, leadership and support of their fellow Veterans exemplifies the values of the games.”

“If someone falls…help your brothers and sisters get back up.”

“There are no limits,” said Thompson. “My wife told me I can do anything I want. I just have to do it from a chair.”

While at this year’s games, Thompson attempted to catch a softball hit his way when he fell out of his chair and dislocated his shoulder. Also, in 2016, Thompson competed at the NVWG despite having a broken wrist and torn rotator cuff after being rear-ended by a distracted driver. He truly knows no limits.

“We are all at the games to compete and leave our best on whatever field we play on,” Thompson said.

Thompson was introduced to Carl Vinson VAMC when he accompanied a friend to the medical center to check on the status of his benefits. Tamara Jackson, administrative officer for acute care, suggested Thompson also apply for benefits and suggested the Sandersville, Ga. resident consider recreation therapy. It wasn’t long before recreational therapist Charlene James urged Thompson to try adaptive sports and in 2011, he attended his first NVWG.

When he’s not practicing for the games, Thompson spends time with his wife of 17-years, Janice, and managing his medical transportation service, 3D Enterprises.

Keith Thompson is no stranger to life’s challenges. However, he is an example all people can emulate when striving for something that seems unobtainable.