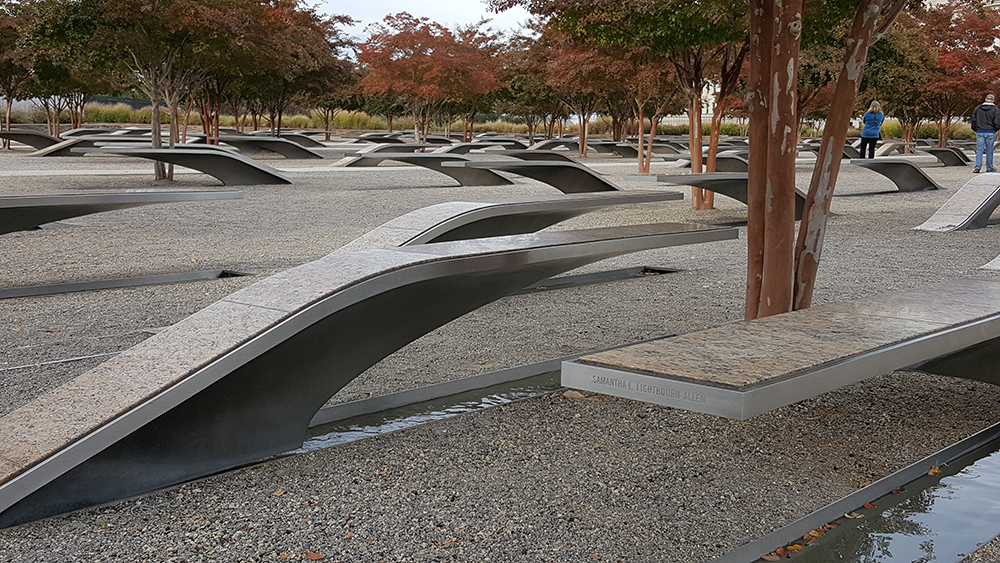 In this guest post, retired Navy Public Affairs Officer David Gai shares his experience with the tragedy that day at the Pentagon and his roll. Today he continues to serve as a VA employee. (9-11 Pentagon Memorial pictured above.)

The walls and floor tremored like an earthquake. The heat wave roared down as fire and thick smoke consumed the corridor where, just minutes before, I had left the Navy’s newly renovated operations center.

On Sept. 11, 2001, at 9:40 a.m., American Airlines Flight 77 crashed into the Pentagon, in an attack on the heart of our nation’s military command that shattered lives, broke spirits and devastated families in its wake. Thick smoke billowed from the black hole left by the impact on the west side of the building as firemen frantically worked to control the flames. Inside, we scrambled to assist the wounded and evacuate our fellow Pentagon employees.

We are never fully prepared for a situation like this, but we do what needs to be done or think needs to be done and instinctively get involved. At the time, I went from emergency response and evacuation, media and public engagement to helping prepare for media briefing areas. The next day I raised my hand to help with the Pentagon’s response. I really didn’t fathom at the time how close I was to being a victim, and my need for healing was part of my wanting to be involved in the recovery.

As local hospitals treated the wounded, the Pentagon rapidly responded to the call for emotional and administrative support. Within hours, staff and volunteers of the Pentagon’s Family Assistance Center (PFAC) began attending to the hearts and souls of the nearly 200 victims’ families in need of support.

The PFAC was set up as a one-stop center to meet the needs of these families even before they actually needed it. We sought to provide everything from their emotional needs, like counseling and social workers, to navigating the administrative maze of insurance companies, Veteran’s Affairs, The Red Cross, FBI and even American Airlines.

The day after the attack we began working with the families of the victims and assisting with the coordination of media coverage from the Pentagon. The PFAC was rapidly set up at a nearby hotel for convenience. Families were briefed at the center twice daily in meetings closed to the media and the general public. It was a sanctuary provided especially for them.

The information we provided to them was the straight facts…no rhetoric or spin…just the facts which the families came to heavily rely on to get a real picture of what was happening. Some of the sessions were extremely challenging, highly emotional and highly sensitive to the needs and wishes of involved families. The answers they needed were not to be found as the remains recovery and identification process stretched from days into weeks. In fact, the families’ wishes became the final deciding factor within the Pentagon on media coverage and interview policies.

WASHINGTON, D.C. (Sept. 11) Clouds of smoke billow out of the Pentagon after a hijacked airliner crashed into it. USCG photo by Telfair H. Brown

We walked a fine line as we buffered the families from the media and public. We passed media requests to the families and facilitated media contact for the few interested families. Ultimately, we adhered to their wishes — and what was best for the families — to remain out of the public eye and scrutiny.

We gained credibility and trust with the families by allowing them to feel safe and assuring them that we would protect them from media intrusion and unwanted public exposure.

Hundreds of ‘requests’ to volunteer or offer support were received from the public, celebrities, politicians, religious leaders and others. Most were declined as not being in the best interest of the families. The exceptions were those viewed as fitting the ‘Lynda Carter’ model.

Lynda Carter, former Miss World USA, singer, soccer mom and actor best known for winning our hearts as Wonder Woman, approached us at the PFAC offering to assist in any way she could. She wanted to be there with the strict stipulation that there be NO PRESS, and no open recognition, notoriety or public awareness of her being there. She volunteered at the PFAC day after day for the better part of three weeks, meeting with the family members of the victims, consoling, hugging, crying, and often just listening to them. In Lynda’s eye, she was doing it because it needed to be done. She was a true bedrock for the families as they faced the unimaginable.

As a public affairs officer my work at the PFAC was extremely challenging and extremely rewarding because it reinforced the mantra of doing public affairs, crisis response and humanitarian support the right way.

The families going through that emotional roller coaster really deserve the recognition and respect for what they endured as a result of this tragedy. For all of us at the PFAC, our experience was rewarding emotionally. It was something that until we personally experienced it, we never really understood what the human spirit is capable of enduring and what was meant by ‘taking care of our own.’

Retired Navy Public Affairs Officer David Gai is the Digital Engagement Specialist at Veterans Health Administration. David was in the Pentagon on 9/11/2001 and served as the co-public affairs officer at the Pentagon’s Family Assistance Center.