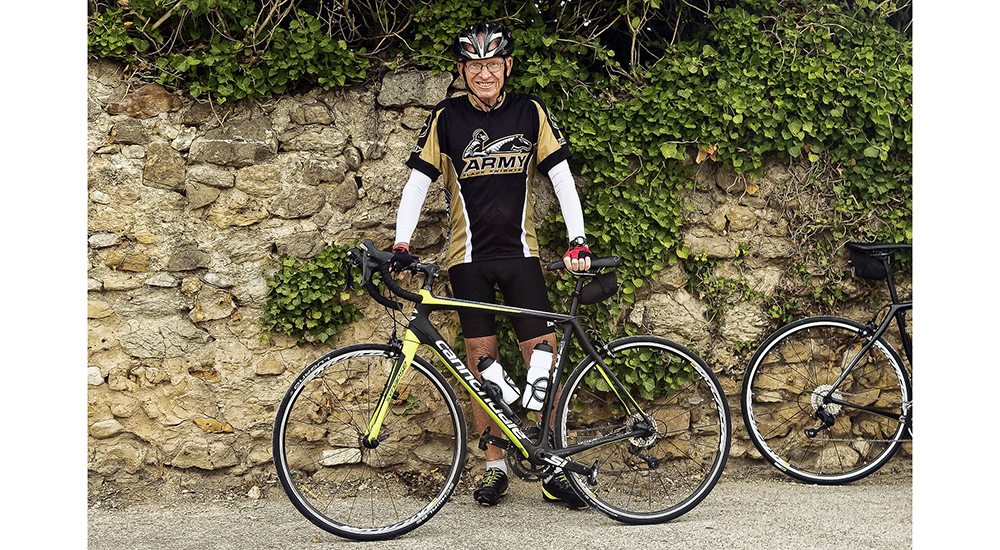 Recounting his own ride through the French countryside this summer, Army Veteran John Johnson, pictured above, says emphatically, “It’s not about me, it’s about my team.”

But unlike the pro cyclists who train for high-profile races, Johnson’s team consists of doctors, infusion nurses and radiation technicians at the West Palm Beach VA Medical Center (WPBVAMC) and the Miami VA Healthcare System.

As he explains, “Cancer patients are assigned a multidisciplinary team of health care professionals.  In addition to the surgeons, oncologists, and the radiation and immunotherapy staffs, from day one I was assigned a dentist, a speech and swallowing therapist, a dermatologist, a nutritionist, a pharmacist and a social worker.  All of whom participated in getting me up the mountain.”

Johnson, a 1972 West Point graduate, was diagnosed with melanoma in his right parotid gland (the largest salivary gland on either side of the mouth) two years ago. That prompted him to undertake cycling to improve his strength for the surgery and ensuing recovery treatments.

“There are great people who work here and they deserve thanks and attention.”

Throughout radiation, a resection of his liver (after another lesion was detected), and ongoing immunotherapy, the 68-year old increased his cycling from three to 40 miles a day, making his dream of riding through France a real possibility.

Johnson’s wife Patti, whom he credits with keeping him alive, booked a bike trip in France. He rented a bike and Patti was his cheerleader.  He says the biggest challenge was climbing Mont Ventoux, a taxing climb with steep inclines where bicyclists experience fierce winds and challenging downhill rides. The mountain is a notorious part of the multiple-stage bicycle race on the Tour De France.

Johnson at the summit of Mount Ventoux

“You can only train for mountains by riding mountains. And what kind of mountains do we have in Florida?” Johnson asks rhetorically, explaining why much of his trip, “Quite frankly kicked my butt”.

When not climbing, he also admits, “It was scary going down. I was a parachutist, so I’ve done that, but you’re going 60 miles an hour downhill and that was terrifying.”

Despite the ups and downs of his “personal Tour de France”, Johnson, who says he’s been all over the world for the Army, fighting small wars in places like El Salvador, Kuwait and Guatemala before retiring in 1998, says he would like to tackle France again on two wheels.

“We’ll see how I’m doing. I’m sort of tethered to the VA hospital once a month now,” Johnson says of continued treatments and a possible second “tour.”

“I owe the West Palm Beach VA a huge debt of gratitude for making this ride possible. I was riding a bike hoping to recover quickly while they were making sure I was upright,” the Pittsburgh native says.

He specifically cites Drs. Hosseinali Jafari, Sunderam Shetty and Ashok Kumar at the WPBVAMC and Dr. Seth Spector at the Miami VA.

“I see all the criticism about VA Medical Centers, but that’s not what I’ve experienced,” says Johnson. “There are great people who work here and they deserve thanks and attention. They’re fantastic and they should all be told ‘You’re fantastic.’”

Dan Quinn is a retired sportswriter who formerly worked for ESPN and is a volunteer with the West Palm Beach VA Medical Center’s Office of Public Affairs.