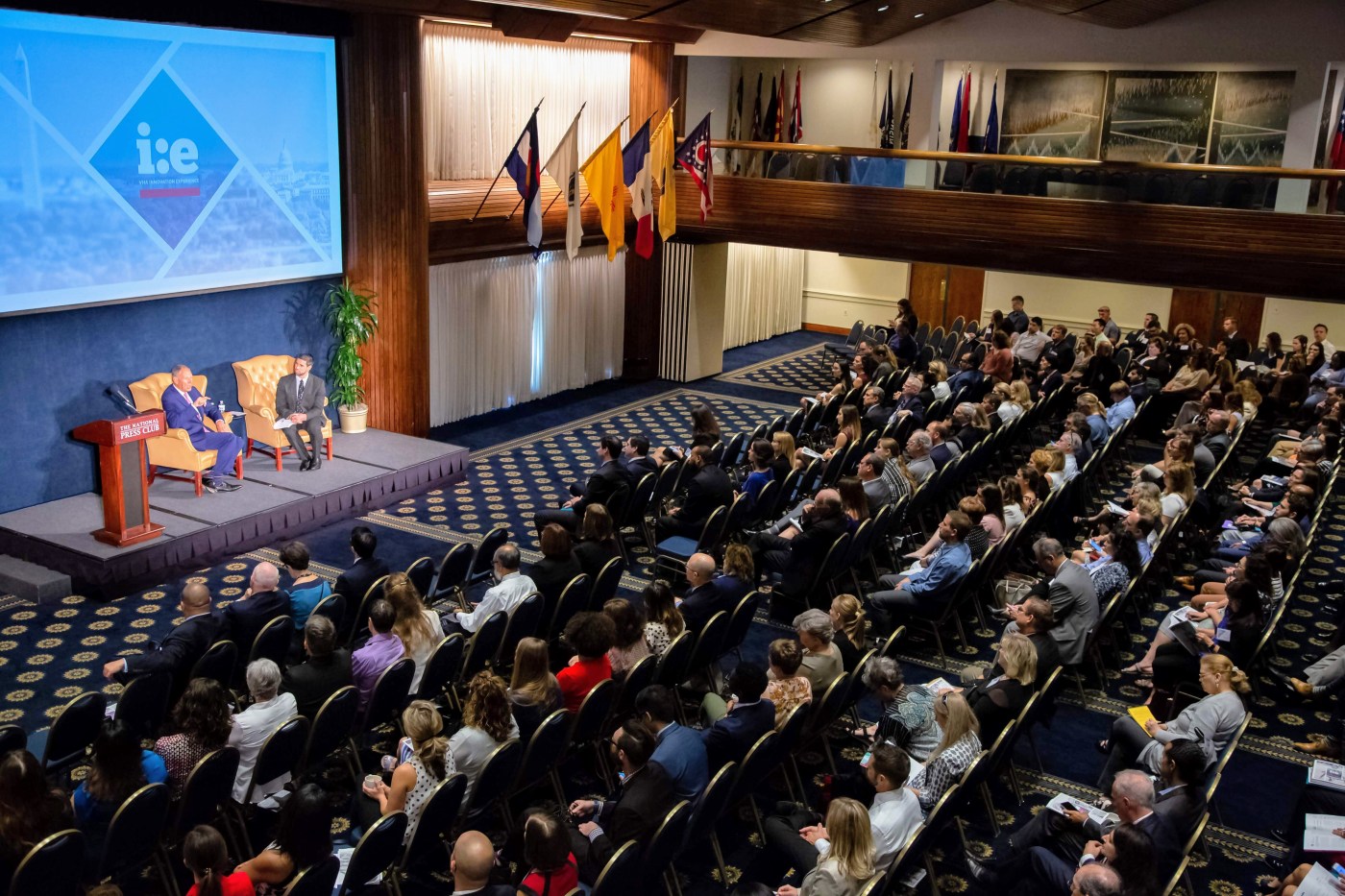 “That actually made me excited about VA.”

This was one of many quotes from Veterans, VA employees, the public, and political officials about the Veterans Health Administration Innovation Experience (VHA: IE), which ran last week from August 28-30 at the National Press Club. The three-day event was a celebration of everything that VA is doing to advance its care for Veterans and highlighted projects from both the VHA Innovators Network and Diffusion of Excellence, the flagship programs of VHA’s Innovation Ecosystem. People tuned in via live streaming from across the country to hear and see VA employees present their groundbreaking work, which ranged from prosthetic limb processing to advanced 3D printing—all with one central theme.

Keynote speaker, Dr. Toby Cosgrove, defined it when he was asked what drove him to innovate and persevere, “It’s the same advice I give to everyone in health care. The one reason you’re here is for patients. It’s the only reason we have a job. That’s the North Star of what we do. It’s daunting, but it’s a privilege.”

The heart of VHA Innovation

The three-day event clearly demonstrated that VHA is at the forefront of change and innovation that is improving how it cares for Veterans across the country. As the first day opened with Innovation Specialists—VHA employees selected to represent their facilities in the VHA Innovators Network—arriving for their quarterly training, participants were already buzzing about the anticipated presentations from innovative VA employees who were going to be telling their innovation and diffusion stories, many of them, supported by the specialists themselves.

The Innovation Specialists are at the center of VHA’s innovation ecosystem, promoting and supporting the spread of best practices, new approaches, and groundbreaking work across VA. When a frontline VA employee has an idea for changing and improving Veterans receive care, it’s the Innovation Specialists who answer the call, working with the innovator to shape their innovation, network with VHA officials, and show that their innovative work impacts Veteran care and service.

This quarter’s training gave the specialists an education in working with outside organizations, persevering through challenges, and a crash course in visual and human-centered design that will help them champion the work being done in their areas. Specialists left the training excited and ready to maximize their contribution and experience at the two-day VHA Innovation Experience.

To say VHA’s Innovation Demo Day is huge is an understatement. To see what it means to VA innovators is impressive. Open to the public and attended by VA employees from across the country, it is the culminating event for seeing and learning about the most creative work going on at VHA. Throughout the day, 76 innovators from VA medical centers across the country delivered six-minute presentations on their innovation projects to a panel of VA and non-VA experts, who, in turn, provided feedback on how they could further improve and spread their innovation at their facility and beyond.

Audience members were able to vote on their favorite innovations, with multiple practices garnering attention of VA Medical Directors. For example, Elizabeth Roten of Grand Junction VA Medical Center received high praise with her practice that proactively prevents suicide among Veterans with chronic pain through a team of caregivers and a suite of educational tools. Another exemplary program focused on building community partnerships to increase access to care for at-risk Veterans. Ivette Magaly Freytes of North Florida/South Georgia VA Healthcare System demoed this program showing how her work has helped get Veterans the care they need both in VA and in the surrounding community.

Other unique programs included the Before I Die Project at the Tomah VA Medical Center, in which Veterans are guided to discuss the goals and dreams they have before their death, creating an opportunity they otherwise might never have to talk about issues. There were some projects that promote healing through music and some that bring art to those in long-term care. Technology also played a key role in many demos, with presentations ranging from home-based cardiac rehabilitation via smart devices, to new tracking systems that help VA better supply care to Veterans.

Common to all of the innovative practices is how they inspire the innovator, advance clinical care, and improve the health and lives of Veterans.

This is how you innovate

For nearly two-and-a-half hours, the entire audience at the third day of VHA I:E was enthralled. They got to witness first-hand a new, emerging, and exciting side of VA, one driven by innovation, passion, and exploring what’s possible. It was fun, engaging, even emotional at times, for both the innovation presenter and the audience. This was the VHA I:E Talks.

Twelve successful VHA Innovation Ecosystem programs delivered TED-style talks live on stage as audiences across America watched and saw for the first time not just the innovation in action, but the stories behind it, and how it impacts Veterans lives. From an audio recording of a woman Veteran telling her life story to a high-tech video showing the possible future of Veteran prosthetics to the announcement that VA may one day be 3D printing human bones, these presentations were more than just demonstrations, they were a glimpse into the power and potential of what VA is all about, why it exists, and how it changes and saves Veterans’ lives when it focuses on what it does best. The innovators themselves shared the stories of their innovations, bringing the audience to tears at moments and enthusiastic applause, even standing ovations, at other times.

Through engaging and powerful storytelling, the VHA I:E Talks, which you can watch above, revealed a new and exciting world of innovation at VHA, bringing a modern and engaging approach to health care subjects that can often be overly technical and uninspiring. Instead of just numbers and data, presenters showed how innovation was changing how VA employees thought about care and how they delivered it at their facility. What’s imminently clear is that innovation is helping employees to find, follow and share their North Star in the form of world-class care and service for Veterans.

The sharks return for another round

VHA I:E concluded with the popular VHA Shark Tank Competition. For the first time ever, the VHA Shark Tank was conducted for a live and virtual audience to see 19 practices from around the country pitched to VHA Sharks (VISN and medical center directors). This kicks off the fourth Diffusion of Excellence cycle, with 10 of the practices chosen as Gold Status Fellows to be replicated nationally if successfully implemented at their local facility.

The bidding for the top innovations was intense, with more Sharks than last year’s event and a diversity of practices, including Automated Eyeglass Ordering for Prosthetics and Registered Nurse (RN) Stay Interviews, the latter of which saw a decrease in RN turnover and higher employee satisfaction when implemented. Overall, the 19 practices received more than 50 bids with more than 200 VA employees listening in during the event.

The VHA Shark Tank Competition isn’t the end of the innovation, though. The winning practices, which will be announced in mid-September, will go on to be implemented in other facilities. From there, they may spread across the entire system and redefine how VHA offers care to Veterans.

The thing that sets VHA Innovation apart is the fact that it is constantly developing, supporting, and spreading this work. VHA I:E was only the beginning of a full year of efforts to find the best projects, ideas, and innovations across VA and develop them into the best care, support, and community for Veterans across America. While VHA I:E is a celebration of the hard work already done, it’s more importantly a glimpse into the future of what VA will do: change the way health care is delivered for Veterans and America.