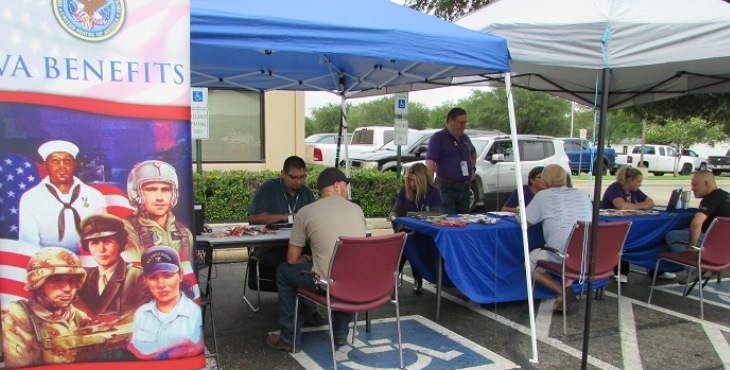 “In order to make an impact, we in the Veterans Benefits Administration (VBA) need to actively support these efforts,” said Limpose.  “We touch veterans’ lives every day; so we have an obligation to bring suicide prevention efforts to the forefront, in everything we do at VBA.”

Starting in 2018, Limpose developed a suicide prevention and awareness committee at his facility.  The committee is an eight-member committee that includes representatives from all business lines at the Waco VARO.

“We work closely with our VHA partners to help disseminate the Veterans Crisis Line phone number throughout all of central, north, east, and west Texas,” said Limpose. “We generate thousands of letters to Veterans from the Waco VARO; so now we list the crisis line number in all outgoing letters.  Also, the Waco VARO postage meter has been programmed to include the number on all outgoing envelopes. “If we can touch one life meaningfully, through our mailings, that would be a huge achievement.”

In addition, through Limpose’s coordination with the executive director of the VBA Office of Business Process Integration every outgoing letter generated from a VBA facility in America will now have the VCL logo and phone number included on it.  Under VBA’s national work queue, all VBA facilities process claims all over America; and – through VBA’s centralized mail system – the VCL information is now distributed throughout the nation as well.

In March 2018, VBA implemented nationally the Centralized Benefits Communications Management Program. Prior to the program, VBA’s 56 regional offices were responsible individually for the processing of their outbound mail.  Under the new centralized program, claims processors across the country now submit letters electronically to one central location for printing and distribution.

Limpose arranged for all Waco VARO employees to have VBA’s suicidal caller guidelines at their fingertips.  The guidelines are an easy, three-step process for providing compassionate assistance, while coordinating promptly with the VCL staff, or with other emergency responders.

The committee was responsible for posting signage containing the VCL phone number, near the sidewalks around the Waco VARO building.  The signs take advantage of the large volume of foot traffic that is generated in the area by the popular Magnolia Silos tourist attraction (of “Fixer-Upper” fame) in Waco.  The Magnolia Silos facility is located immediately across the street from the Waco VARO.

“Our 8-person committee was also busy planning a special Outreach Seminar on Sept. 9, which was sponsored by the Backyard Grill in Waco,” said Limpose.  During the 8-hour event, Waco VARO employees provided suicide prevention and awareness information; as well as benefits information, and assistance with submitting claims for VA benefits.  This event garnered widespread local media coverage.

The event, was titled, “Veterans for Suicide Prevention – Finding the 14.” The number 14 represents the fact that nationwide, of the 20 Veterans who commit suicide per day, only 6 of them have received treatment at a VA facility within the past year.

The Waco staff, 65 percent who are Veterans themselves, also have the opportunity to wear a t-shirt that promotes the Veterans Crisis Line, and supports Veteran Suicide Prevention and Awareness.  As one of the largest VA regional offices in the country, having employees who visually spread the word about the Veterans Crisis Line can have a huge impact.

On Sept. 29, the  Waco staff will participate in the ‘Out of the Darkness Walk’ to increase awareness and raise funds to support the American Foundation for Suicide Prevention.

Limpose more than 800 regional office employees – realize that suicide prevention efforts are truly in the hands of everyone within VA and our nation.

About the author: Tom Morley, is an employee at the Waco VA Regional Office in Waco, Texas.