From archery to sailing, Navy Veteran credits National Veterans Summer Sports Clinic with keeping him on the move 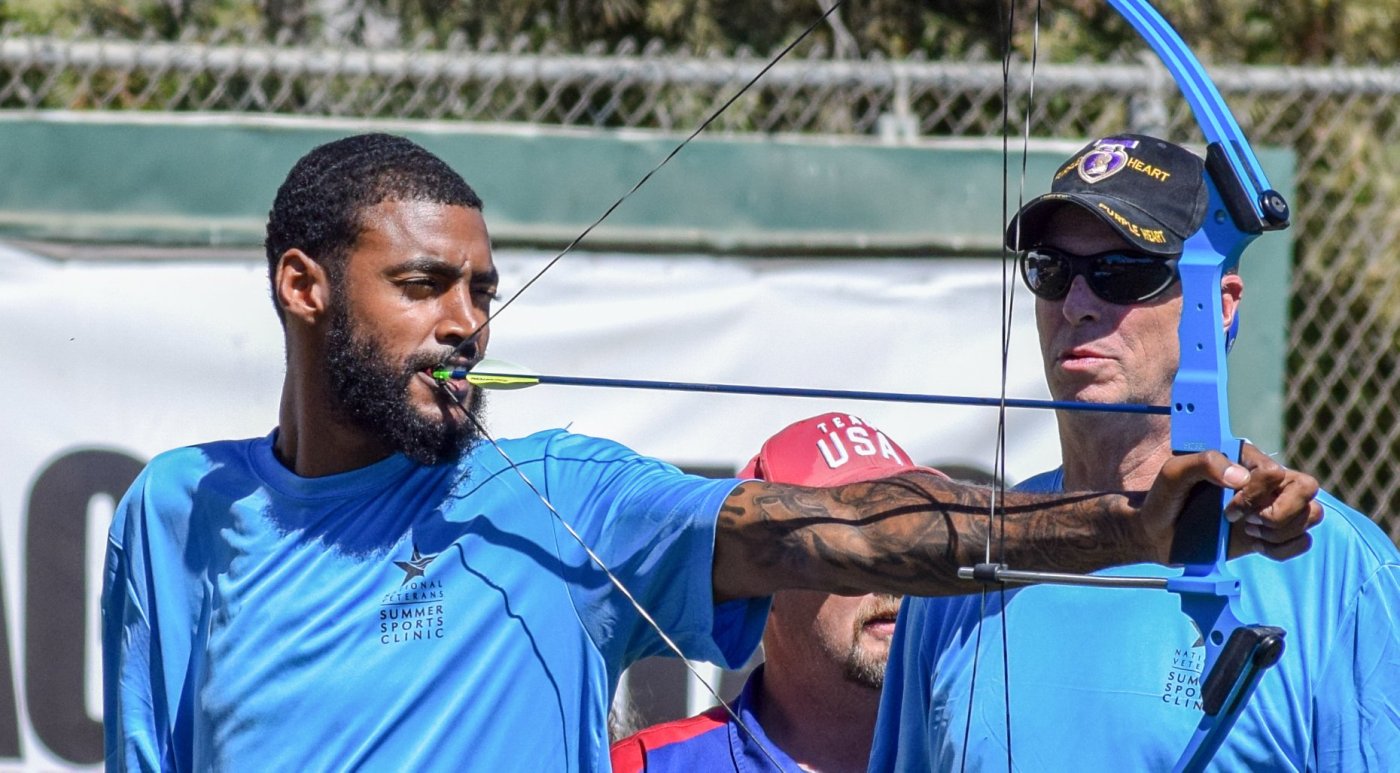 Navy Veteran Gabriel George came to the National Veterans Summer Sports Clinic this year filled with energy and excitement. Returning for his second time to the clinic, George says his first time at the clinic was life-changing.

He joined the Navy in July 2004 where he served as a corpsman and deployed twice.

A few weeks after arriving home from his second deployment, he was involved in a devastating motorcycle accident.  While heading home from bible study, a car pulled out in front of him. He awoke three weeks later in a hospital to find he had broken his C2 and C5 vertebrae, six ribs, his collar bone and scapula; he had collapsed both his lungs; suffered a traumatic brain injury; and permanently paralyzed his right arm.

After the injury, George says he spent a lot of time living on the couch and watching tv.

But then he was introduced to the National Veterans Summer Sports Clinic by Katie Blunk, his recreation therapist at North Florida/South Georgia Veterans Health System, and says his life changed forever.

Navy Veteran Gabriel George returned for his second time to participate in the National Veterans Summer Sports Clinic. George says the clinic got him moving and off the couch after suffering injuries from a motorcycle accident.

Initially, he had low expectations at the clinic, and thought his paralyzed arm would prevent him from doing many activities.

“No way. I can’t do that,” he said, when he learned archery would be one of the sports he’d be introduced to.

But instructors showed him how to draw the bow by biting down on a mouth tab, and with that first pull and release of the arrow something woke within him.

After archery, he went to sailing.  As a Navy Veteran, George had lived aboard ship, but he’d never sailed a small vessel.  He found the experience exhilarating, and says he felt connected with the water, pulling lines and working the sail.

“(It’s) at the top of the list of healing.  Being able to find something you can do, moving just one body part, the rest of the body wants to follow and move too,” George said.

By the end of his first clinic, he was looking for a way to extend the experience.  With Blunk’s help, George signed up for a sailing clinic near his home in Florida before the week in San Diego was finished.

“The very next morning I went out and found an archery shop and bought a bow,” he said about the moments after he arrived home.

Blunk says George’s experience is similar to many of the Veterans she’s seen benefit from adaptive sports therapy.

“Often I hear so many people saying I can’t do that. And then once they do try, it’s healing,” she said. “Once a Veteran sees they can do one sport they are inspired to keep trying other sports.”

George continues to participate in sports programs whenever and wherever he can.

“I was doing nothing before the (National Veterans) Summer Sports Clinic,” he said. “I bought a house and I don’t know why, because now, I’m never home.”

Sarah Jane Phillips is a public affairs specialist at the Northeast Ohio VA Health Care System.  She is a graduate of the Defense Information School Public Affairs course and specializes in marketing and design.  She lives on a small farm in a historic village outside of Cleveland, is a naturalist and enjoys boating and hiking with her dogs.