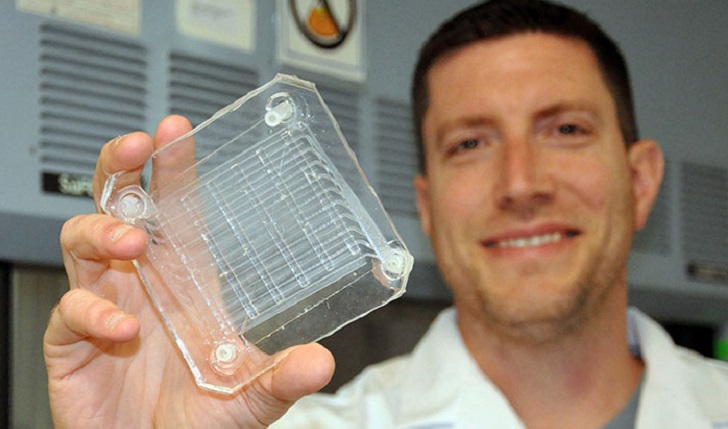 VA scientists at the VA Ann Arbor Healthcare System in Michigan recently announced that they are working to create a 3D-printed artificial lung that could potentially revolutionize treatment of Veterans affected by lung disease.

Though still in its infancy, VA researchers hope to build what they call the first artificial lung that closely replicates the natural lung, resulting in compatibility with living cells and a very small size for portable or wearable short- and long-term respiratory support.

In the near term, the device could be used as a temporary measure – a bridge to help patients waiting lung transplant or an aid for Veterans with recovering lungs. According to researchers, future versions could have longer-term applications.

“Our Veterans deserve the highest quality of care and the latest breakthroughs in medical science,” said VA Secretary Robert Wilkie. “This exciting project is the latest in a long string of incredible research and medical advancements developed by VA researchers over the years. The results of this project could change millions of lives for the better.”

Exposure to burn pits, sand, diesel exhaust and chemicals are some of the most commonly cited factors that lead to lung problems for active-duty military. About 20 percent of patients with severe traumatic brain injury also have acute lung injury.

One lung disorder VA researchers hope to tackle someday with the 3D-printed artificial lung is chronic obstructive pulmonary disease (COPD), regarded as one of the most prevalent and costliest ailments in the Veteran population.

COPD affects 5 percent of American adults and 16 percent of the Veteran population. Most people with COPD have emphysema, in which the air sacs of the lung are damaged and enlarged, and chronic bronchitis, a long-lasting cough caused by chronic inflammation of the bronchial tubes. The disease is characterized by an airflow limitation that is often linked to an abnormal response of the lungs to noxious particles or gases, such as those in cigarette smoke.

For additional information about this study visit https://www.research.va.gov/currents/0818-Researchers-strive-to-make-3D-printed-artificial-lung-to-help-Vets-with-respiratory-disease.cfm