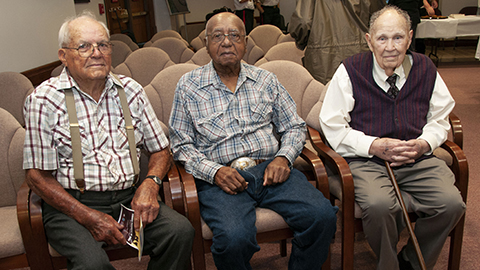 Here is his story.

From Bartlesville to the Battle of the Bulge

Born on April 2, 1926, Fred Brooks turned 18 in 1944. Nearly nine months later, the native of Bartlesville, Okla. was sent to the front lines on Christmas Day during the Battle of the Bulge.

On January 10, 1945, Brooks and five other solders in the 4th Infantry Division were conducting a night patrol and entered a German village.

“We went into this little village at night to check it out, and there wasn’t anyone in that village when we entered it,” said Brooks. “When daylight came, the Germans were everywhere. They killed one and wounded two.”

Surrounded, the remaining soldiers were forced to surrender, and were transported to Stalag IV-B Prison Camp in Mühlberg, Germany.

Brooks said the Germans fed the POWs once a day, which was typically a small cup of vegetable soup.

“That’s all they had to give you,” he said. “The Germans had nothing to feed their own troops, let alone us.”

He said the Germans never harmed him, but he did have to endure the brutal winter conditions.

“My feet were frozen terribly bad,” he said. “I didn’t have one drop of medication. There was an elderly English man in the camp where I was at and he helped me tremendously to clean the wounds as best we could. It was a rough winter.”

“The Russians entered our camp during the night,” said Brooks. “The next day, I think there was three German guards left and the Russians hung them high in the trees. We were very happy to see (the Russians). They fed us.”

Brooks was reunited with the American Army and sent to the coast of France to wait for a transport ship home. While waiting, he met another soldier from Bartlesville, and the two made a pact not to tell their families they were coming home.

“When we got to the little bus station in Bartlesville, his wife was waiting on him,” he said with a laugh. “He had broken our vow not to call.”

From the bus station, Brooks walked a mile to his parent’s home.

“I got my parents up at 2 o’clock in the morning,” he said. “It was unreal. My parents were just out of it to see me walking in the door. It really surprised them. They were very happy.”

After the war, Brooks worked in construction and retired at the age of 75. He still lives in Bartlesville.

Looking back on the war and his internment in a German POW Camp, Brooks credits divine intervention for his survival.