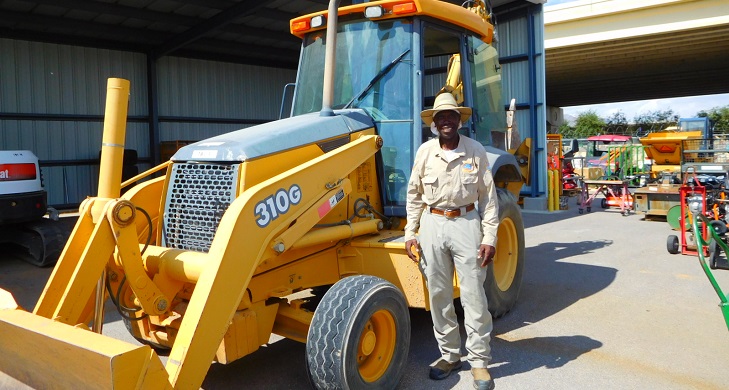 Air Force veteran Curtis Jackson has lost his way a few times in the last 25 years, but knows his life is now firmly back on track. He attributes much of this to the Department of Veterans Affairs and its Cemetery Caretaker Apprenticeship Program.

“VA and its vocational rehabilitation programs have given me the opportunity to succeed. Literally and figuratively, I say they have saved my life,” said Jackson, who admits he got mixed up with the wrong crowd and has made some mistakes in the past. “With VA’s support, I’ve changed my priorities and my outlook on life.”

Jackson was one of the first graduates of the National Cemetery Administration’s Cemetery Caretaker Apprenticeship Program in 2012. As part of VA’s initiative to end Veteran homelessness, the NCA works with VA’s Homeless Veteran and Compensated Work Therapy programs to identify potential program candidates from sites throughout the country.

In the Cemetery Caretaker Apprenticeship Program, students spend a year learning their trade and receive advanced instruction in areas such as professionalism and conflict management. Leading up to graduation, each student completes more than 1,300 hours of classroom and on-the-job training. Upon graduation, they can elect to remain at their training cemetery, compete for positions at other federal facilities, or take their skills to the private sector.

“I was at the El Paso VA Medical Center when I heard about VA’s Compensated Work Therapy Program and the opportunity at the National Cemetery,” said Jackson, who first learned about VA services at a Miami VA Healthcare System outreach event in 2001. “It’s a privilege to work at the Fort Bliss National Cemetery and use my skills where they can do the most good. The best part is seeing how much the families of fellow veterans appreciate what you do.”

Last month, VA presented the Fort Bliss National Cemetery with the Award of Excellence for meeting or exceeding National Shrine standards in 68 of 74 categories. These include customer satisfaction surveys, appearance of headstones and grounds, daily cleanliness of customer facing facilities, equipment and facility maintenance, and safety of visitors and employees.

James Porter was named director of Fort Bliss National Cemetery, effective June 11, 2017. He is responsible for all administrative, burial and maintenance operations at the cemetery. He previously served as foreman of the cemetery from February 2016. Mr. Porter joined the National Cemetery Administration as a cemetery technician in November 2011. He also served as a cemetery caretaker work leader from August 2013. Mr. Porter is a United States Marine Corps Veteran and served as an instructor and inspector at Delta Battery 2nd Battalion 14th Marines. His previous experience includes helicopter crew chief and mechanic on UH-1N and AH-1W helicopters. He served in Operation Desert Storm and retired as a 1st Sgt. with 24 years of service. He earned a master of arts in business and organizational security management from Webster University in Webster Grove, Missouri, and a bachelor of science in psychology from Park University in Kansas City, Missouri.