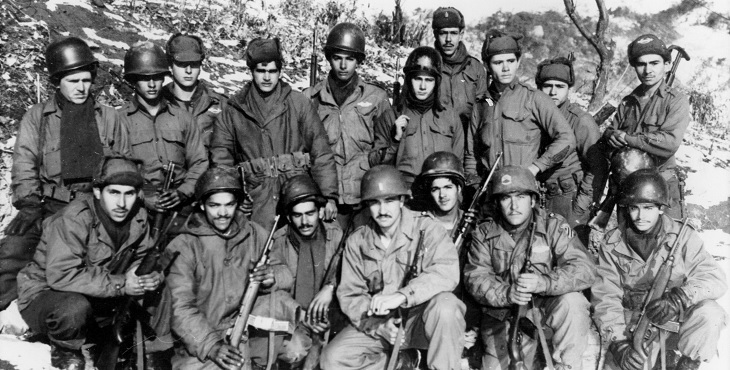 Sfc. Gil Ramos-Rivera was born and raised in Puerto Rico and served in both the Korean War and Vietnam War.  He is one of thousands of Puerto Ricans who have served in the military as U.S. citizens in every conflict since World War I.

Puerto Rican soldiers from the 65th Infantry Regiment during the Korean War.

Ramos-Rivera followed in his father’s footsteps and enlisted in the Army in October 1950, shortly after the start of the Korean War.  The war began two years after President Harry Truman signed Executive Order 9981, which began the process of desegregating the military.  While the 65th Infantry Regiment remained a unit composed of Puerto Ricans, many English-speaking Puerto Ricans, such as Ramos-Rivera, were integrated into other Army units for the first time.  In total, over 60,000 Puerto Ricans served in the Korean War.

Ramos-Rivera remained in the Army after the Korean War and continued his service into the Vietnam War.  From 1969 to 1970 he deployed to a camp in Quan Loi, Vietnam.  The camp housed the 15th Medical Battalion of the 1st Cavalry Division which treated casualties sent to them from beyond the wire.

During Ramos-Rivera’s tour, the enemy launched a major attack against the camp.  As the battle went on, an unknown amount of North Vietnamese soldiers breached the perimeter walls.  Ramos-Rivera, who served as the camp’s First Sergeant, and other non-medical personnel were forced to pull guard within the company area to protect the medical staff as they treated casualties.  That day, Ramos-Rivera and the soldiers under has supervision ensured the safety of the medical personnel as they treated over 100 casualties.

Shortly thereafter, Ramos reached his twenty year mark of military service.  He retired from the Army on November 1, 1970.  Like many other Puerto Ricans, Ramos-Rivera decided to move to mainland United States and settled in Orlando, Florida.  He lived there for the rest of his life.  On March 17, 1996, Sfc. Gil Ramos-Rivera passed away at the age of 70.

Today, he is memorialized in Florida National Cemetery in Bushnell, Florida.  His story was discovered last year by a student at University of Central Florida while conducting research in partnership with NCA’s Veterans Legacy Program.  The partnership engaged both students and faculty with the stories of Veterans interred at Florida National Cemetery.  In total, over 100 biographies were written for Veterans, one of whom is Ramos-Rivera.  You can read his full biography here.

To learn more about the Veterans Legacy Program and how NCA is modernizing the way that we memorialize our Veterans, visit https://www.cem.va.gov/legacy/

In recognition of National Hispanic Heritage Month, please join us in honoring the service of Sfc. Gil Ramos-Rivera.  We commemorate our Veterans to ensure that their memory never fades and that their legacy never dies.