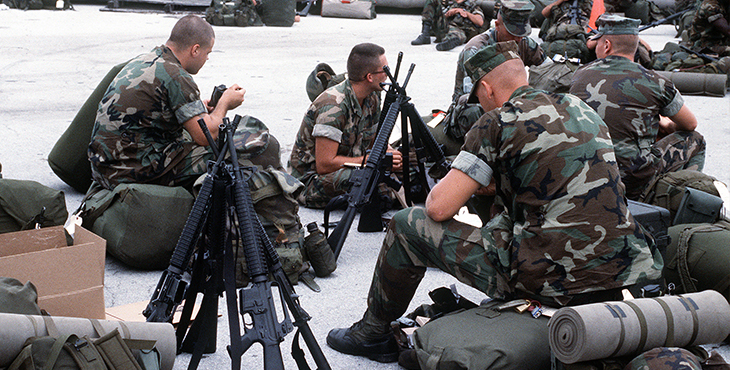 Above, Marines wait to board Navy ships for transport to the Persian Gulf region for Operation Desert Shield in 1991. VA researchers recently reported on a new resource for conducting studies on Gulf War Veterans’ health. (Photo by Lance Cpl. Graham)

The full version of this article originally appeared in VA Research Currents.

While researchers in VA and elsewhere have been studying Gulf War Veterans’ health problems since the 1990s, there are still more questions than answers—much to the vexation of many Gulf War Vets and their families, and of researchers themselves.

“We regularly attend the RAC (VA Research Advisory Committee on Gulf War Veterans’ Illnesses], and we hear directly from Veterans about their frustrations,” says Sims.

Sims and a team supported by VA’s Office of Research and Development have built a new resource, the Gulf War Era Cohort and Biorepository, they hope will help address some of the lingering questions on Gulf War Veterans’ health problems.

It’s a “cohort”—the term researchers use for a group of people being studied. The new cohort includes 1,275 men and women who served during the Gulf War era in the early 1990s. They have completed surveys, agreed to have their medical records accessed, and provided blood samples from which DNA has been extracted. The study began recruitment in 2014 and ended in 2016.

The researchers tell how the group was assembled and describe their health, military, and demographic status in a recent article in the American Journal of Epidemiology.

“Some studies could certainly address Gulf War illness, but there may be other studies that would like to assess rates of various diseases related to aging, such as cancer and heart disease.”

Sims says her group’s main task was to build a cohort for researchers—in and outside VA—to investigate some of the unanswered research questions most relevant to Gulf War veterans. The team is expecting their recent journal article will draw the attention of researchers interested in studying health conditions among Gulf War veterans. They’ve already received a few queries.

According to Dr. Dawn Provenzale, “Some studies could certainly address Gulf War illness, but there may be other studies that would like to assess rates of various diseases related to aging, such as cancer and heart disease.” Provenzale chairs the Gulf War Era cohort project and is also a gastroenterologist and professor at Duke University.

The Durham CSP Epidemiology Center will make the data available to qualified researchers, with privacy safeguards in place. For example, it will be stripped of names and social security numbers.

The Durham team does have funding from VA’s Office of Research and Development to conduct its own GWAS, or genome-wide association study. Working with VA’s Pharmacogenomics Analysis in Little Rock, Arkansas, the researchers will examine the entire gene sets of the Veterans in the study and look for patterns of association with various health conditions.

This work, along with Gulf War studies based on VA’s Million Veteran Program, could lead to new genetic insights, which in turn could help pinpoint a biochemical pathway to target therapeutically. That has remained an elusive goal for researchers.

To read the full version of this article, click here to visit VA Research Currents.