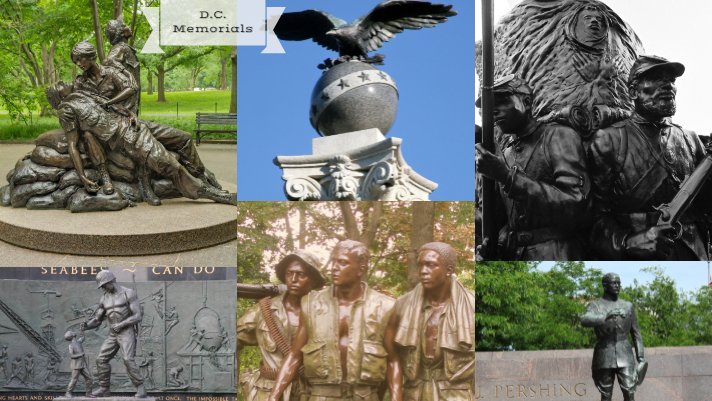 Washington, D.C., is home to many renowned memorials. However, there are many lesser-known memorials in our nation’s capital that have a rich history and honor many important groups and events.

The African American Civil War Memorial, dedicated in 1998, honors the 209,145 members of the United States Colored Troops (USCT) that served during the Civil War. It was dedicated under the leadership of Frank Smith Jr. and Colin Powell and titled the Spirit of Freedom.

The Spirit of Freedom depicts soldiers and sailors who served in the Army and Navy in the Civil War, helping to end the war and ensuring the freedom of four million slaves. Surrounding the actual statue are three walls with all the names of those who served. The statue and surrounding walls are located in the “U” street district that was historically the center of African-American culture and history in Washington D.C. There is also a museum near the statue that honors the sacrifice of the African-American servicemen and helps promote the often ignored history of African Americans’ contribution to the war effort.

The Spanish-American War monument is located in Arlington National Cemetery. It was erected in 1901 and unveiled in 1902 upon the request of Winifred Lee Lyster, Chairman of the Executive Committee for a Spanish War Memorial and Marker. The statue consists of a 50-foot-high Corinthian column with a bronze eagle on the top. At the rear of the memorial are four cannons, two of which were Spanish cannons captured by the Americans during the Spanish-American War. The memorial honors those who perished in the Spanish-American War and draws attention to a lesser-known American war. As the tablet at the rear reads, the memorial ensures the remembrance of those who gave “their lives for our country that freedom might live.”

The Seabees memorial was dedicated in 1972 and honors the contributions of the Naval Construction Battalions (CBs) during war and peace. It is one of a series of memorials that line the entrance to Arlington National Cemetery. The memorial consists of a statue in front depicting a Seabee holding out a helping hand to a child. Inscribed below the statue is “with compassion for others we build–we fight for peace with freedom.” The statue and its inscription emphasize the qualities that the Seabees represent, namely that of compassion. Behind the statue is a bronze relief showing the various tasks the Seabees perform. These include constructing bases, bulldozing and paving thousands of miles of roadways, and building airstrips to support the military in times of war and peace since World War II. The memorial is also inscribed with the Seabees motto, “Can Do.” Many do not know the important role the Seabees play in the military and this memorial honors their service.

Pershing Park is dedicated to Gen. John J. Pershing, leader of the American Expeditionary Forces (AEF). The park is located in a position of high importance on Pennsylvania Avenue, leading up to the White House. This positioning indicates the importance of World War I in American history. The park is a peaceful place located in the busy city center of D.C., representative of the peaceful fields of France and Belgium that were quickly transformed into fields of battle. Important aspects of the park include the statue of Pershing and the memorial to his forces The statue of Pershing depicts the general as he was remembered by his troops, an iron-jawed man with a fierce visage, holding field glasses in hand and looking out over the field of battle. Pershing was the only general besides George Washington to be awarded the rank General of the Armies, ranking him above the five-star generals of World War II. Pershing’s statue reminds the viewer of the importance of his leadership during World War I. The  memorial consists of two high walls which are intended to make the viewer feel as if they are in a World War I trench. It captures the isolation of the battlefield and how the vibrant French countryside was transformed into a lifeless landscape of trenches.

When one thinks of the Vietnam Memorial, one tends to picture the wall inscribed with the names of the dead. However, there are two other important pieces to the Vietnam Memorial that are less well known. One of these is the Three Soldiers Memorial. This memorial depicts three soldiers of different ethnicities and races. One is Euro-American, one African American and one Latin-American, symbolizing the diversity of the American military during the Vietnam War. One soldier is actually a Marine while the other two are Army infantrymen. They carry the typical supplies of a Vietnam service man such as the 1911 .45 and the first generation M16. The three soldiers look in solemn tribute upon the wall, remembering their dead comrades. This memorial was supposed to complement the wall and provide a more standard and conventional memorial of a statue depicting soldiers, as some were upset with the nontraditional design of the wall.

Another part of the Vietnam Memorial is the Women’s Memorial. This memorial was dedicated in 1984 along with the Three Soldiers Memorial. It depicts three women who served in Vietnam, all of them nurses tending to a wounded soldier. The memorial honors the 265,00 women who served in the Vietnam era whose sacrifice is often unknown or forgotten. Approximately 11,000 women were stationed in Vietnam during the war and many lost their lives in the cross fire. This memorial remembers all the women who served as part of the Army or as civilians and was the first memorial in the District’s to honor women’s service. The women of the statue are positioned next to their brother soldiers indicating their sacrifice deserves to be recognized alongside the sacrifice of their male comrades.

The next time you visit our nation’s capital, swing by these memorials and see them first hand.