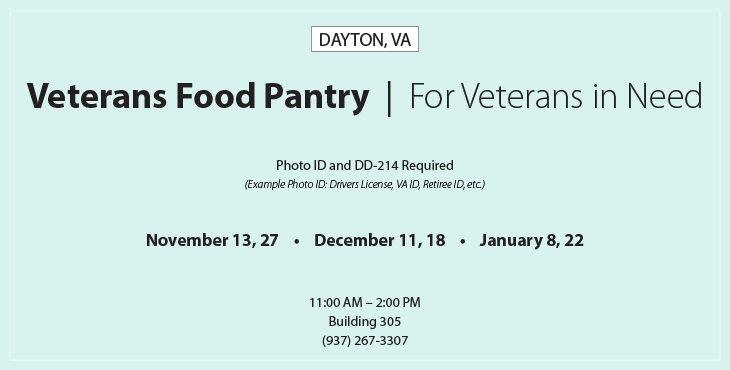 Hunger and Homelessness Awareness Week, observed the week before Thanksgiving, brings people from across the country together to shine a light on the issues of hunger and homelessness. Participating groups engage their communities by hosting events that generate public awareness and action. One of these events included the grand opening of the VA food pantry in Dayton, Ohio, on Tuesday, Nov. 13.

The VA ribbon-cutting ceremony was led by Jill Dietrich, director of the new food pantry, and Michelle Riley, CEO of The Foodbank, Inc., in Dayton. The ceremony began at 10:30 a.m., and the food pantry opened to the public at 11 a.m.

The Foodbank collaborated with Feeding America, the nation’s largest domestic hunger-relief organization, to establish the VA food pantry. The food pantry is open to all Veterans, providing all the food they need at no cost if they met certain income limits and presented a photo ID and their DD-214 (a form proving their retirement, separation, or discharge from active duty). The food pantry does not turn away anyone who was in need as long as they had a photo ID.

Richard Hoiles, a public affairs specialist at VA believes this food pantry will go a long way in serving Dayton Veterans who may not know where their next meal is coming from.

“We serve over 40,000 Veterans here in Dayton, and if they are in need, we won’t turn anyone away who is hungry,” Hoiles said.

On the day of opening, VA staff members and a volunteer team unloaded food items donated by Feeding America from the supply truck to display on shelves in the food pantry. The pantry is organized like a grocery store, with a produce section, a meat and protein section, and so forth.

Veterans are asked to take a number. While waiting for their number to be called, they were served free coffee, bagels, and donuts provided by Panera Bread. When their number was called, each Veteran was guided through the pantry by a “personal shopper” who helped them find and choose the foods that best met their needs.

“The food pantry gives people more of a grocery shopping experience, rather than just receiving a box of food items,” Hoiles said. “It requires more coordination on our end, but it will better serve the Veterans.”

Early in 2019, Dayton VA Medical Center plans to evaluate whether there is an ongoing need for the pantry. Hoiles remains optimistic that there will be a high enough demand for the food bank to continue holding regular events for Dayton-area Veterans in need.

“Where we’re located in West Dayton, it’s considered a food desert. So there is a good likelihood we’ll have people from all over the local community turn out for this as well,” said Hoiles.

For more details about the Dayton Veterans food pantry, check out The Foodbank Facebook events page.

Ally Logsdon serves as the senior portfolio manager for the VA Secretary’s Center for Strategic Partnerships. She began her tenure at the VA three years ago as a Presidential Management Fellow. She has held roles at the San Francisco VA Medical Center and in the VHA Homeless Programs Office in Washington, DC. She is the National Coordinator for VA’s partnerships related to food security and hunger, including the partnership with Feeding America.