Home / The American Veteran, Top Stories / Medic recalls landing on Omaha Beach and the profound impact on his life 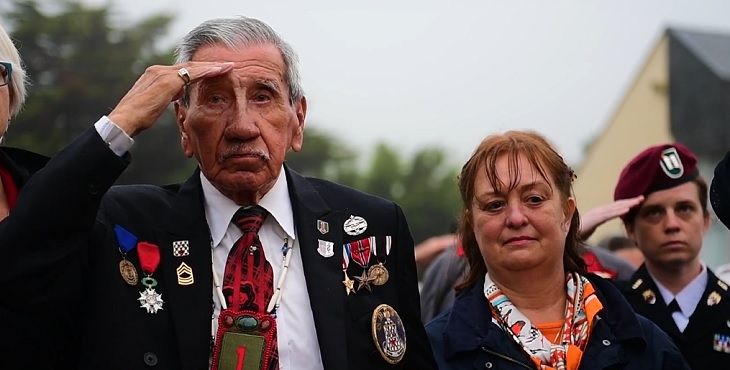 When Charles Norman Shay and his comrades landed on Omaha Beach at 06:30 hours on June 6, 1944, they were met with mortar shells and heavy gunfire by entrenched German forces.

“Survival was on the mind of everybody,” he recalls. The 19-year-old Penobscot Indian from Maine was among the first group of American soldiers in Normandy on D-Day.

With water up to his chest, Shay eventually made it to shore, where he fought through obstacles and German resistance and saw the bodies of many fallen comrades. Although this scene was troubling, Shay quickly shifted his focus to his duty as a combat medic. While treating those with broken limbs and gunshot wounds, Shay noticed several soldiers who were drowning at the shoreline. He ran back to the water to rescue them.

There was one soldier he could not save, however. Among the injured was Edward Mulosowich, who trained with Shay in England. As he lay dying from a gunshot wound to the stomach, Shay gave his friend a shot of morphine to provide some comfort and ease the pain.

Thanks to Shay, many American soldiers’ lives were saved on D-Day. For his heroic service, he was awarded a Silver Star, Bronze Star and France’s highest order of merit, the Légion d’honneur.