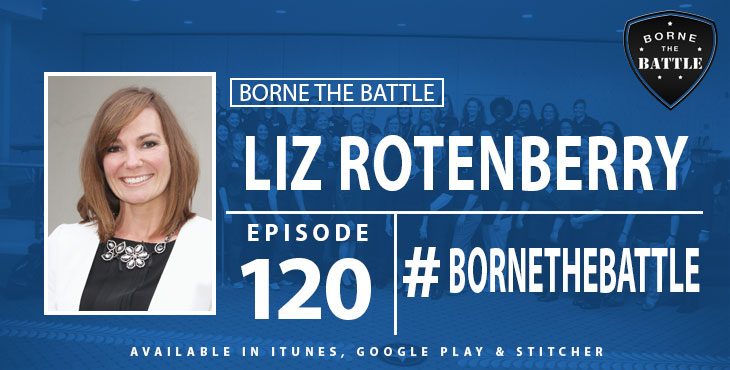 Everyone needs a break from time to time. Borne the Battle – and, more importantly, its host – decided to take a short break from production. It’s been a month since our last episode was published, but I was still recording interviews in that span of time. A couple of the interviews I did were with caregivers. With November being National Caregivers Month, and with this week being Thanksgiving, I decided to bring the podcast back to full form with two episodes featuring caregivers. Not only to spotlight their efforts, but to show our gratitude for the role they play in Veterans’ lives.

First up is Liz Rotenberry. Liz joined me at VA Central Office after the Elizabeth Dole Foundation showed interest in collaborating on a podcast. I didn’t know much about Liz before we started the interview, but by the end of it I felt I had just recorded one of the more valuable interviews in the podcast’s two year history.

Liz, is a military caregiver for her husband, a Marine Veteran of Operation Iraqi Freedom & Operation Enduring Freedom Veteran. As an Elizabeth Dole Fellow Alumna, Liz works to advocate not only for herself and her family, but for all Military and Veteran Caregivers. Liz joined the Elizabeth Dole Foundation as their Caregiver Community Program Coordinator and is now the Foundation’s Fellows Program Coordinator.

Prior to becoming a military caregiver, Liz graduated from the University of Delaware with a BAS in Art and Art History. Liz worked in the architectural field as a designer for schools, medical, offices to government and military facilities, including the test sites on Proving Grounds in Arizona. The work Liz experienced with the Proving Grounds in Arizona provided an eye opening experience to what our Military train for in real life theater every day. Liz is honored to have been a part of the training and implementation of the Joint Experimentation Range Complex. It is important for Liz to represent not only the Veteran but especially the Caregiver.

Liz and I talk about being a military spouse during her husband’s service and how she experienced transition when her husband separated from the military. That, plus plenty of insight on her role as a caregiver.

The full transcript for episode 120 is available here.