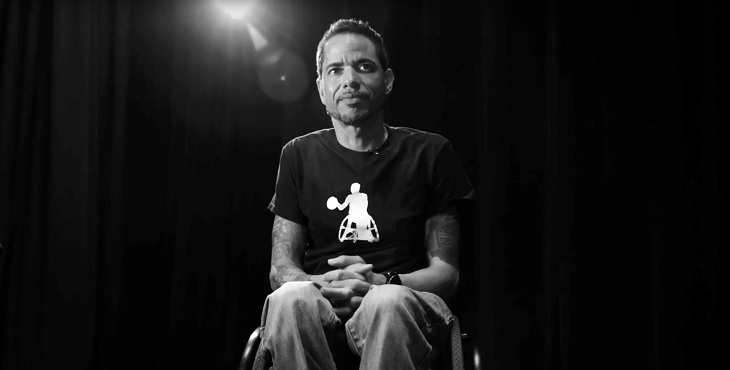 The reverberating thud of a basketball hitting hardwood echoes through halls of building 8 at the George E. Wahlen VA Medical Center. A Veteran zooms over, scoops up the ball, wheels around and takes another shot. Outside of being in a wheelchair, one of the things that most stands out about Army Veteran Orlando Perez is the tattoo of the National Veteran Wheelchair Games logo on his right shoulder. It serves as a tribute to adaptive sports—a passion he credits for saving his life.

While training for deployment, Orlando fell from a wall, landing on his back. The fall caused a cyst to form on his spinal cord that eventually left him paralyzed from the waist down.

“What I was really concerned with was how am I going to take care of my family,” Orlando said, while reflecting on learning he would spend his life in a wheelchair.

He credits the Department of Veterans Affairs with helping him adjust to life in a wheelchair. It was during that adjustment he first learned of VA’s adaptive sports.

“I really did not want to hear it,” said Orlando. “I didn’t really want to understand what it was. I thought it was a pity party.”

That’s until he a group of Veterans invited him to National Veteran Wheelchair Games in his native Puerto Rico.

“After my first event, it was the 100 meter race,” Orlando said, choking down tears. “My mom, my ex-wife, and my kid just seeing how excited they were when I won the gold medal—changed my life. I saw it as a blessing at that point.“

The wheelchair games introduced Orlando to wheelchair basketball. He spent hours each day perfecting his skills.

When tryouts for the Pan-America games rolled around, he made the Puerto Rico national team as a rookie.

“Everything tipped off from there … Just watching all these athletes and they are mentoring me, they train every day. They overcome adversity every day—just like any other athlete does.”

Adaptive Sports would eventually take him to the slopes of Aspen for the National Disabled Veterans Winter Sports Clinic. He fell in love with winter sports, and moved to Utah, where he now skis and plays sled hockey in addition to keeping his hardwood skills up to speed.

“I don’t need my legs, my legs are overrated,” said Orlando. “I’ve done more sitting on this wheelchair and doing adaptive sports than I could have ever done in my life.”

Jeremy Laird is a proud Army Veteran and loves telling the stories of our Veterans. He joined the communications team at VA Salt Lake City Health Care System in 2015 following a 20-year career in broadcast journalism.

Video produced by audiovisual production specialist Tyler Moore. Tyler is a U.S. Air Force Veteran and a Maryland native. He’s currently kicking it in Salt Lake City where he is honored to tell the stories of his fellow Veterans through the lens of a camera as well as highlighting the great programs available to Veterans at VA.