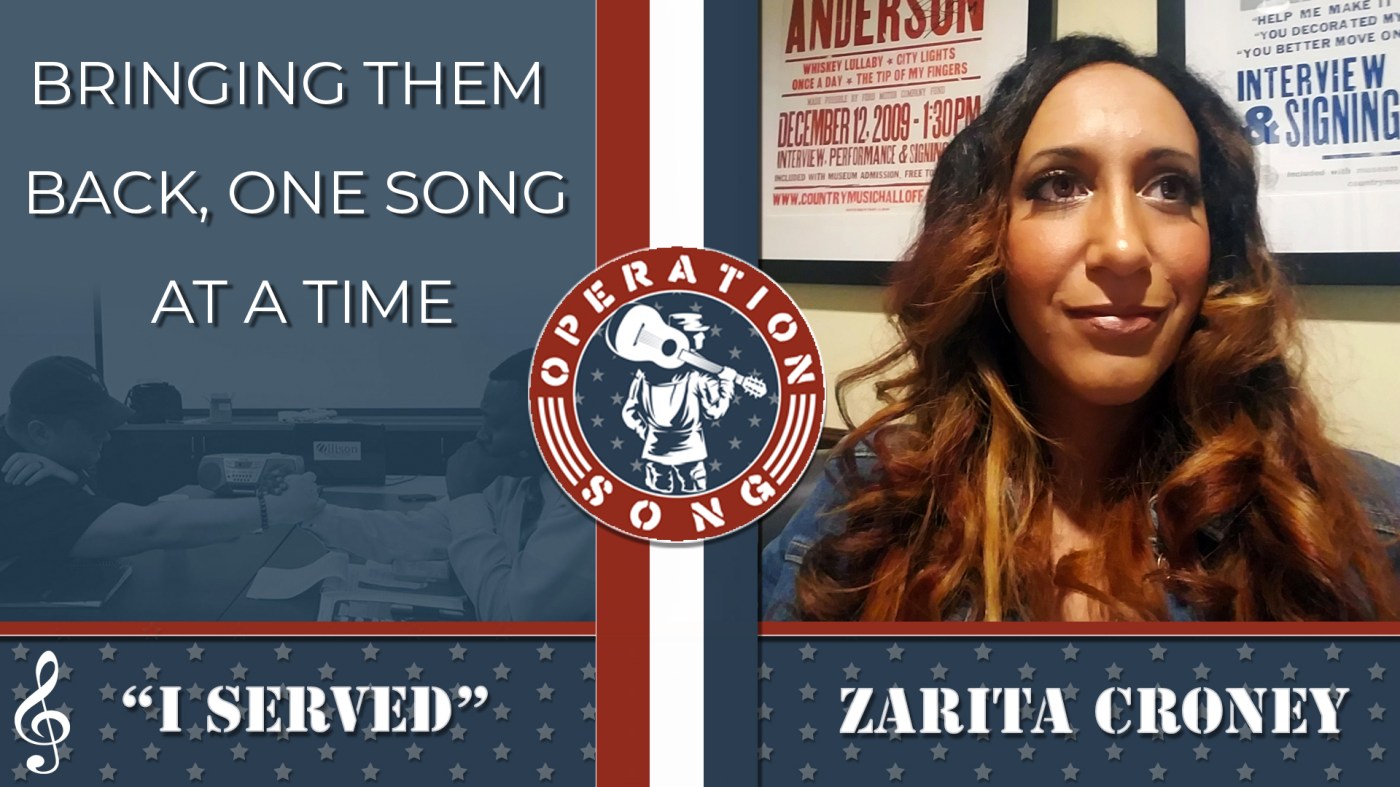 This #OperationSong spotlight is on “I Served” by Veteran Zarita Croney who served in the Army deploying to Afghanistan from 2010 to 2011.

After the deployment, she was injured during training. Due to misfiled paperwork, she was not considered injured and was expected to perform at the same level as her fellow soldiers, even though she could barely put her clothes on by herself in the morning.

Zarita became depressed and suicidal soon after she was discharged. Her life started to look up when she got involved in recreational therapy programs through her local VA. She soon channeled her emotions into her love of music, first writing a song for herself and then writing the song. “I Served” –  meant to be an anthem for the Military Sisterhood Initiative, a program especially close to her heart; one that helped her realize she was not alone and that her experiences can help others heal. The Military Sisterhood Initiative is a program started by Challenge America to help create a support network for female Veterans. Zarita has been very involved in Challenge America, participating in two of their music therapy retreats.

In the first part of the song, Zarita discusses what it is like for female service members to return to civilian life. In the chorus, she names all male relatives and friends to prove that the listener assumed that the topic of the song had to be about some male in her life. In effect, this disregards all the sacrifices that female service members make even though there are many females in the military.

In interviewing for this post, Zarita discussed how women are sometimes not identified as Veterans just because they are female. She described going to a restaurant that honors Veterans with a free meal on special occasions such as Veterans Day, only to be rejected for not being a man – and refusing a military ID because “spouses also get issued a military ID.”

I Served” is an effort to inform the public of the service and sacrifice on women Veterans.

Similar to their male counterparts, it’s also hard for them to reconnect with their family after a deployment as they do not understand what they have been through. Zarita touches upon this struggle in her song by highlighting how much females in the military have accomplished, how there have been millions of female service members and how they have always been volunteers.

In the last portion of the song, Zarita lets other female Veterans know that they are not alone and that there is always someone who has their back, no matter what.

Zarita wants her song to help other female Veterans feel heard. From her own experience, she believes that when Veterans seek help, knowing they are not alone can mean the difference between life and death.

Without the Military Sisterhood Initiative and other similar organizations, Zarita says she would not be alive today and she wants to use her experience to let others know that they are not alone.

Thank you for your service, Zarita!

Here is Zarita’s song on SoundCloud:

If you have problems listening to the song here, you can also listen to it on the Operation Song SoundCloud page by clicking here: https://soundcloud.com/operationsong-tm/i-served

Operation Song is a non-profit based in Nashville, Tennessee that partners professional songwriters with veterans, active military, and their families to help them tell their stories through song. Since 2012, they have written over 600 songs with veterans of WWII to those currently serving. They hold weekly workshops in Middle Tennessee and sponsor events and group retreats throughout the U.S. Those who serve need no musical background, only the desire to tell their story. If you are interested in learning more about Operation Song or hearing more songs, please visit: http://www.operationsong.org/.