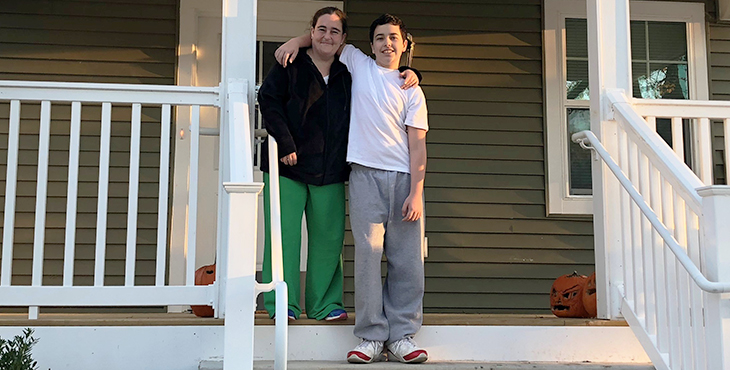 For Veterans experiencing homelessness, securing housing is often the first step to finding stability in the rest of their lives. To help homeless Veterans secure affordable, stable housing, the U.S. Department of Veterans Affairs (VA) utilizes its  Enhanced-Use Lease (EUL) authority to develop underutilized land and buildings on VA property. Through the EUL Program, VA out leases underused VA property to the private sector for up to 75 years to develop supportive housing for Veterans and their families who are either homeless or at risk of becoming homeless. These projects are located on VA medical center (VAMC) campuses, giving Veterans easy access to physical and mental health services and other support.

The EUL Program has succeeded in executing 99 EULs, of which 48 are housing, including the supportive housing at Togus VAMC and Perry Point VAMC. As of October 2018, there are 2,166 Veterans in EUL housing.

Cabin in the Woods at Togus VAMC

The Cabin in the Woods project in Maine was developed on the Togus VAMC campus through the EUL Program in partnership with Volunteers of America. The cabins, which opened in August, are home to 21 previously homeless or at-risk Veterans. One of those Veterans is former Marine Steven McFarland.

McFarland served in the Marine Corps in California for three years before moving back to his home state of Maine. He worked in carpentry and construction for many years but eventually found himself without a job and with ever-increasing rent. From that point on, McFarland bounced between shelters, transitional housing and camping in the woods.

In 2014, McFarland went to his first Stand Down event and received a wealth of information on VA services. “I realized that there’s more than just camping,” said McFarland. With this realization and help from VA staff, McFarland was referred for the HUD-VASH program. He first used the HUD-VASH voucher on an apartment in Bangor, Maine, but rent increases eventually prevented him from using the voucher for that apartment. He found a new apartment a few towns over, but conflicts with other tenants forced him out. McFarland went back to camping.

This past August, McFarland was living in a tent in the woods of Augusta, Maine. “I’d come to Togus occasionally, shower, go to the gym,” said McFarland. Those occasional trips became more frequent, as McFarland was set up with his case manager, Arwen Agee.

Arwen and other employees at Togus VAMC identified McFarland as a Veteran who could be successful in the new EUL housing, Cabin in the Woods. McFarland moved in at the beginning of September. “I can ask to see Arwen, or anyone on the HUD-VASH staff,” said McFarland. “I can ask for whatever I need — food, mental health support, whatever it is.

“It’s changed my life quite a bit. Not just [having a home] but having the comradery with other Veterans. It’s taking a lot of stress out of my life.” Now McFarland is focusing on his next goals, starting a business and overcoming alcoholism.

For Veterans who may not know what VA can do for them, McFarland offers this advice: “Any Veteran just needs to walk through that door and take a chance. Something good might come out of it.”

HELP Veterans Village at Perry Point VAMC in Maryland consists of 75 new and rehabilitated housing units for homeless and at-risk of homeless Veterans. Developed under VA’s EUL Program and in partnership with HELP USA, a national nonprofit for the homeless and people in need, the Village reached full capacity within four months of opening.

One of them is David Barber, a Navy Veteran who had been homeless for ten years. Barber grew up in an abusive household, and alcoholism had been a part of his life since childhood. He battled with alcohol dependency all of his adult life but was able to hide it from his wife and their six children while they were growing up. But that changed.

“In my later years, alcoholism got the best of me, and I couldn’t keep it together anymore,” said Barber. In August of 2008, he was arrested and began his life without a home.

Barber lived under bridges, broke into cars, and squatted in houses for shelter. Then, almost a year ago, he moved into transitional housing provided by the Maryland Center for Veterans Education and Training. “MCVET really rescued me from my situation and led me to a place where I was ready for the HUD-VASH program at Perry Point,” said Barber.

This August, VA gave Barber the keys to his own apartment at Veterans Village at Perry Point, using Perry Point’s project-based HUD-VASH voucher.

“Those ten years were torturous, but I put myself through them,” said Barber. “With VA and a lot of work on my own part, I’m able to afford this beautiful home.”

Now ten months sober and with a home of his own, Barber is focused on improving his mental health, getting a job, and making memories with his family. “I’ve been able to work with VA, and as long as I work with the program, they work with me,” said Barber. “They’ve been very helpful and very productive. And I want to just express my gratitude to the whole VA system.”

Others who call Veterans Village at Perry Point home include Army Veteran Sarah Ostrowski and her 11-year-old-son, Zachariah.

Ostrowski and her son struggled with homelessness for nearly two years, fighting to receive assistance from multiple organizations. Bouncing between stays with family members and at hotels, Ostrowski began to feel out of luck. But she kept fighting.

Due to a back injury sustained during service, Ostrowski was receiving VA compensation and was already connected with other Veterans. “It was another Veteran that gave me the number for the national homeless line, so I called them, and they directed me to a social worker at Perry Point,” said Ostrowski.

She met with the social worker, talked about her goals, and was soon given a referral for the HUD-VASH program. By the end of August, she was living at Veterans Village.

With donations from local Veterans Service Organizations (VSOs), Veterans Village set up Ostrowski’s home with furniture and household goods. “Not only did they give me a home, they gave me pillows, blankets, dishes, cleaning supplies,” she said. “It was like Christmas in August.”

Now, Ostrowski has a place for her son to thrive and for her mother to stay when she needs help with her injury. She is also studying ministry at a local college with the goal of becoming a preacher. “I want to be able to get out there and help people who have been in my situation and have them benefit from me as much as I’m benefitting from everyone right now,” she said.

“I’m hoping that being in a stable environment will help me get back on my feet. Maybe I can move from here, and someone else can use this house who needs it as much as I’ve needed it. That would be my ultimate goal.”

Through VA’s EUL Program, Veterans across the country are able to find stable housing. While every Veteran has different needs, having VA services at close hand is a good start to accessing the right programs and successfully transitioning out of homelessness.

If you or your organization would like to find out how you can help end Veteran homelessness, contact us at homelessvets@va.gov. You can also visit our webpage to learn about how you can collaborate with VA to provide Veterans with affordable housing, employment opportunities, household essentials, and more.