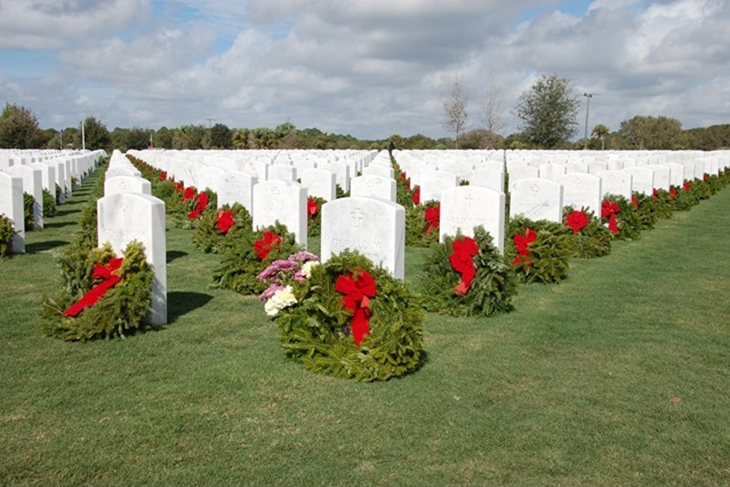 Over the past week, VA has honored Veterans by working with community and Veterans Service Organization volunteers to place holiday wreaths at VA national cemeteries in remembrance of the military branches and  Veterans’ service and sacrifice for the nation.

“The ceremonial wreaths pay tribute to our armed services and demonstrate the gratitude the country feels for those who have served,” said VA Secretary Robert Wilkie. “Also, this December, as in the past, thousands and thousands of volunteers contribute their time and resources visiting our national cemeteries to beautify gravesites ensuring all who wore the uniform are remembered.”

The Worcester Wreath Company, through a campaign called Wreaths Across America, began providing holiday wreaths in 2006. Since then, the program has grown to include volunteer fundraising and wreath donation for placement at Veterans’ graves at VA, state Veteran and private cemeteries.

All 136 VA national cemeteries received at least seven wreaths from the Worcester Wreath Company, one for each service branch. In addition, wreaths were provided for Merchant Marines, prisoners of war and those missing in action. Community and Veterans service organization volunteers coordinated ceremonies and activities at more than 120 VA national cemeteries.

The mission of the National Cemetery Administration is to honor Veterans and their eligible family members with final resting places in national shrines, with lasting tributes that commemorate their service and sacrifice to the nation.