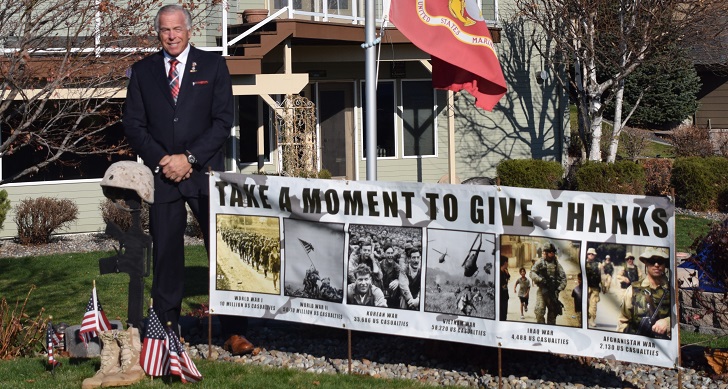 Richard Shutts lived on the streets of Coeur d’Alene, Idaho, over the course of three bitter winter months. His homelessness came after a difficult divorce and the closing of his local business. According to the Vietnam Veteran, he survived the frigid nights on a cot underneath a tree. Times were tough.

The retired staff sergeant received help from various non-profit organizations and kind individuals within the North Idaho community, which later shaped his outlook on life and fueled his desire to give back to others.

“People took care of me, and I realized this is what I have to do,” Shutts said.

Since then, the Seattle native and his wife, Sharon, have been heavily involved in giving back to their community. Shutts said the success of his second small business, Crown Media Printing, gave him and his wife the means to support various local non-profit organizations within the Inland Northwest.

“There’s a term called ‘pay it forward’,” Shutts said. “I was blessed in my business. And now we have the ability to do what we do today.”

Never above you, never below you, always beside you. This phrase describes the brotherhood that exists within the military, according to Shutts, who resides in Liberty Lake, WA. He has adopted this philosophy into his personal life. The Vietnam Veteran and his wife frequently donate food, cookware, and toiletries to Newby-ginnings, a non-profit organization in Post Falls. Newby-ginnings provides “essential items, resources and referrals” to active military within the Inland Northwest.

Shutts also spends time visiting the VA Home, Shriners Hospital, and Sacred Heart in Spokane on a monthly basis. He takes his dog, Dexter, to each location to lift Veterans’ spirits and connect with everyone on a personal level.

“There’s no pre-judgement. And that’s what I love about the dog therapy. I can get Veterans to talk to me about things they don’t even tell their doctors because there’s no judgment. It’s so rewarding.”

The 10-year Marine Veteran said he connects with Veterans who have dealt with their own personal hardships. During one of his visits, Shutts met a Veteran who was tasked with escorting 400 fallen soldiers back to their families.

Shutts, who has dealt with depression in the past, explained how difficult it is to connect with others who have not served in the line of duty. He also does not agree with the phrasing of a common medical term.

“People call it PTSD. I call it PTS for Post-Traumatic Stress because when you say a disorder, you have just labeled somebody, and I’m not labeling anybody.”

When asked what advice he would give someone living with PTS, Shutts said to confide in others to receive the right support and guidance.

“Reach out and ask for help. It does not make you less of a person. It actually makes you a stronger person when you can admit to yourself that there’s an issue that you can’t take care of.”

When he visits various organizations and hospitals, Shutts said he makes it a point to listen to what each Veteran has to say.

“My hands are extended and my ears are open for them. That’s exactly what they need.”

The former member of Alpha Company, Third Recon Battalion, Third Marines described his love and admiration for his brothers and sisters within the United States military.

“I have a real love in my heart for my military guys and gals,” Shutts said. “Whether they’re Marines or not. Any branch. I know what they’ve sacrificed.”

David Humphreys is a contributing editor at Alien Gear Holsters and Bigfoot Gun Belts, brands owned and operated by Tedder Industries. He also freelances in the Inland Northwest as a writer and photographer.