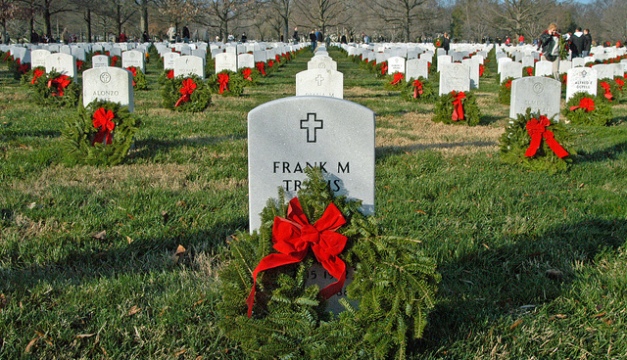 Cody Pasieke’s war ended 44 years ago, but the Navy veteran still honors the men with whom he served during Vietnam.

Pasieke joined thousands of volunteers who walked between headstones at Arlington National Cemetery on Saturday to decorate grave sites with ribbon-adorned wreaths. Some were there to visit family or comrades killed in action.

Others placed wreaths on the headstones of total strangers.

The 20th annual event saw its biggest crowd ever, and more than 90,000 wreaths were placed at burial sites. Wreaths Across America, the non-profit group that organizes the national event, had 20 trucks convoy from their headquarters in Maine.

“It’s very emotional to see everyone working together to honor our veterans,” said Karen Worcester, a co-founder of the group. Worcester placed wreaths at the grave of her two aunts and an uncle interred at Arlington.

The ethos of Wreaths Across America is to “remember, honor, and teach” about the sacrifices of the military, said Wayne Hanson, chairman of the group’s board.

Arlington was just one cemetery to observe the event. 740 cemeteries worldwide participated, including all 131national cemeteries administered in the U.S. and Puerto Rico by the U.S. Department of Veterans Affairs.

Participants arrived in the early morning by car and Metro. Many were Maine natives that chartered buses for the event. Arlington’s amphitheater was packed as Hanson emceed the event.

“We have come here from all walks of life to honor and remember our fallen American veterans,” Hanson said. Groups of active duty troops shared granite benches with older men with military slogans and insignia pinned to their hats and coats.

After remarks from Maine Governor Paul Lepage, participants fanned out across the cemetery to unload hundreds of boxes of wreaths in trucks parked throughout the cemetery grounds. Organizers asked people to take only one or two wreaths per person, and to respect non-Christian veterans by skipping headstones marked by other faiths.

Many of the volunteers had some connection to the military. Three members of a women’s walking group from Fairfax, Virginia each had a family member in the service.

Others were clearly in the service themselves. Groups of clean-shaven men with cropped haircuts paced through Section 60, the only section of Arlington that accepts new interments.
A group of Boy and Girl Scouts were chosen to lay a wreath during a ceremony at John F. Kennedy’s grave site. From there, groups streamed to the Mast of the Maine, an original part of the ship USS Maine. The ship was sunk off the coast of Cuba in 1898, an event that led to the Spanish-American War.

Maine Governor Paul Lepage placed a wreath at the memorial and posed for photographs with Maine State Troopers and organizers of the event.

The day’s events ended with a special wreath laying at the Tomb of The Unknowns. The renowned changing of the guard ceremony, marked by military precision, was altered to include a wreath laid at the base of the tomb. The crowd watched silently in the cold as the guard’s heels clacked with each passing turn.

The wreaths will remain at Arlington until January 28, when volunteers return to the cemetery to collect them.

Organizers hope to see the event grow enough in the next five years to place a wreath at every grave at Arlington.

“I was too busy fighting back tears that I haven’t processed it yet,” said Pasieke. “But it’s beautiful. It’s like looking at a giant Christmas card.”

Check out photos from the event below.