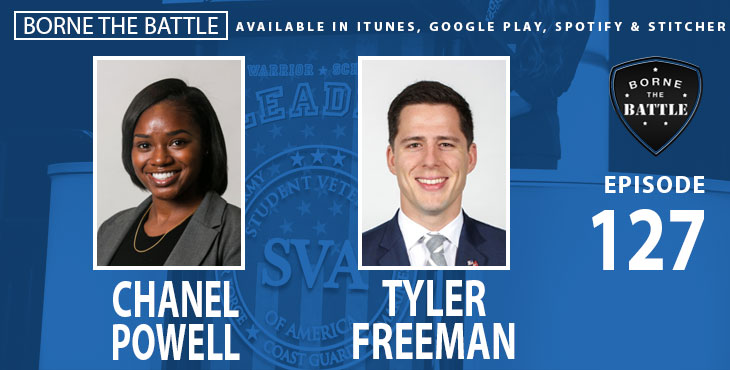 Today, we continue our discussions with Student Veterans of America’s Student Veteran of the Year finalists. This episode features Chanel Powell and Tyler Freeman. We learn about their chapter’s success in 2018, their philosophy on outreach, and how to include other military personnel on campus.

Chanel is a paralegal specialist in the New York Army National Guard for the past 3 years and continues to serve. She deployed with the 1156th Engineer Company to Kuwait and Iraq in 2016-2017. Promptly after returning home from deployment she started her first semester at the University at Buffalo just last spring. During her first semester she was elected SVA chapter President and the following semester they became nationally recognized within the Student Veterans of America, making their chapter one of the newest. Her plan is to continue her education in law school a little over a year from now.

Tyler was born and raised in Baton Rouge, Louisiana and joined the United States Marine Corps in 2008.  He was stationed in the Carolinas shortly thereafter with military occupations primarily involving helicopter squadrons as an Aviation Maintenance Supervisor and a CH-53E Helicopter Crew Member.