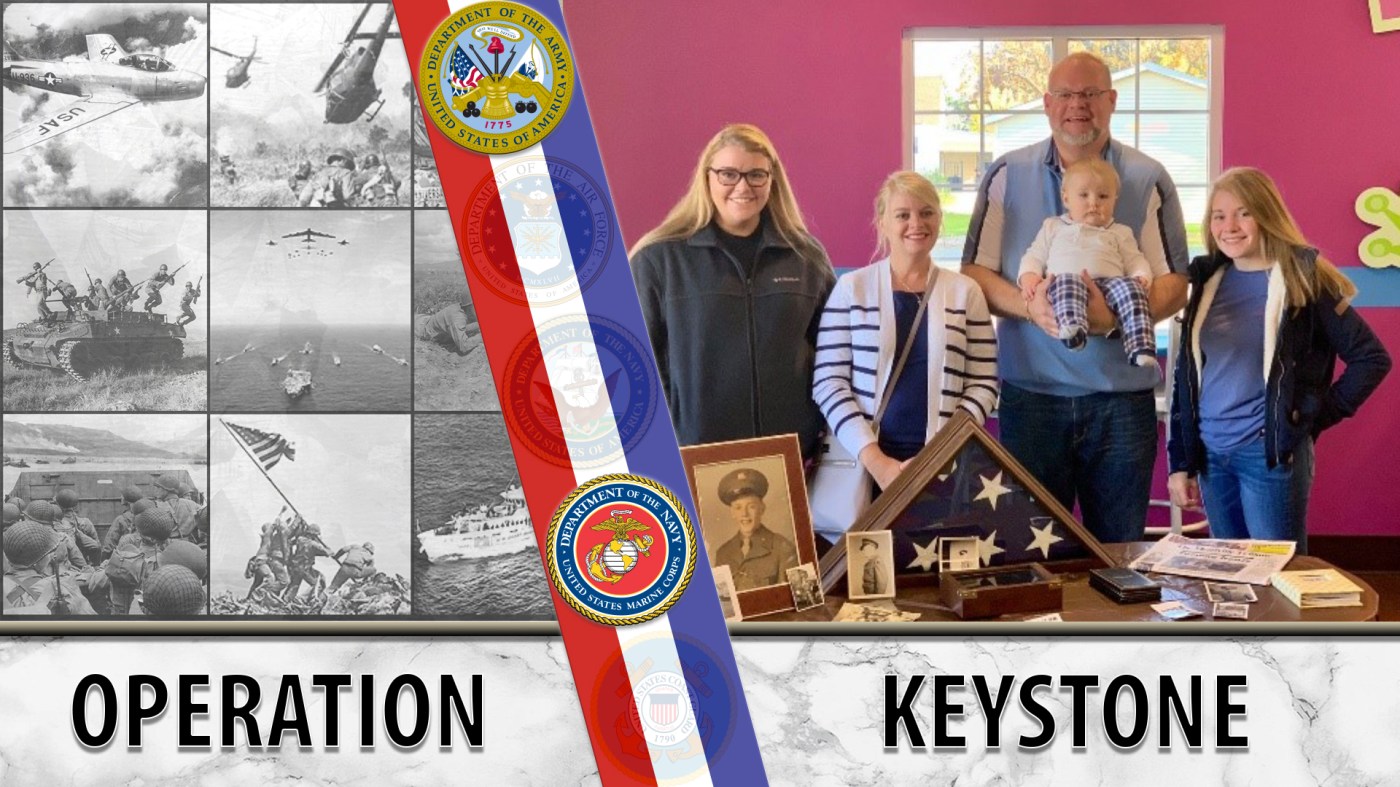 Purple Hearts Reunited has returned six lost Purple Hearts, one Silver Star, and one Bronze Star to their recipients’ families or to homes of honor from Nov. 1 through Nov. 3 across the state of Pennsylvania in an effort dubbed “Operation Keystone.” This organization is a nonprofit foundation that returns medals of valor to Veterans or their families in order to honor their sacrifice to the nation. Since its beginning, the organization has returned over 500 lost medals, traveled over 100,000 miles, visited over 42 states and has directly affected the lives of over one million people. These returns will make a total of 11 medals that the non-profit has returned to the state of Pennsylvania this year.

The first of such medals belongs to Pvt. Raymond Wolfe McDevitt, who was born January 1909 in Shamokin, Northumberland, Pennsylvania to Mary M. (Wolfe) Martz. McDevitt served with D Battery, 1st Battalion, 59th Coast Artillery Regiment stationed at Fort Mills, Corregidor Island, Philippines during World War II. On April 25, 1942, McDevitt was severely wounded in action from artillery and bombing strikes on Battery Cheney. He was treated in the Fort Mills Hospital located in the Malinta Tunnel on Corregidor. The island fell to the Japanese on May 7, 1942 and McDevitt died of his wounds two days later on May 9. His medal was discovered by a local citizen of Snyder County, Pennsylvania. After extensive research, no direct family could be located. His medal was presented to the director of Veteran Affairs of Snyder County, Tony Korzenaski, on behalf of Union-Snyder Community Action Agency and Snyder County Veterans Affairs. The VA facility will house the medal for permanent display.

The second medal belongs to Cpt. Walter A. Yoder born December 1910 in Port Carbon, Pennsylvania to Frank Herb and Edith Elizabeth (Adams) Yoder. On Feb. 1, 1932, he enlisted in the U.S. Marine Corps. As a lieutenant serving with Company D, 1st Battalion, 2nd Marine Regiment, 2nd Marine Division, he was wounded in action on Dec. 1, 1942 at Guadalcanal, Solomon Islands. He would survive the war and continued to serve until 1955. He passed away on Dec. 17, 1970 and is buried in the Fort Rosecrans National Cemetery in San Diego, California. On behalf of his nephew, Roger A. Yoder, his medal is being donated to Tom Drogalis, executive director of the Schuylkill County Historical Museum for permanent display.

The third medal belongs to Pfc. Edmund Raymond Rogoski born in November 1915 to Adam and Stella Rogoski in Wilkes-Barre, Pennsylvania. He enlisted for service in the U.S. Army on Sept. 12, 1942 and served with the 184th Infantry Regiment, 7th Infantry Division during World War II. He died of wounds suffered in action on Camotes Island in the Pacific on Jan. 24, 1945. His medal was recently purchased from a collector online. After research, no direct family could be located. His medal will be donated to his high school alma mater for permanent display. Receiving the medal is Mr. Gabriel, principal of James M. Coughlin Junior/Senior High School in Wilkes-Barre. This is one of the most complete medal groupings Purple Hearts Reunited has seen, which includes letters of condolence from Edmund’s company commander, battalion commander, unit chaplain, and Gen. Douglas MacArthur himself.

The family of Pfc. Stephen Joseph Sadoski is the fourth recipient for whom a medal was returned. He was born in April 1890 to Joseph and Anna Yakuboski Sadoski in King of Prussia, Pennsylvania. Sadoski enlisted for service in the U.S. Army on Nov. 2, 1917 and was assigned to Company B, 312th Machine Gun Battalion, 79th Infantry Division. On Nov. 7, 1918, during the Meuse-Argonne Offensive of World War I, he was wounded in action at La Borne De Cornouiller, France. This was just days before the armistice on Nov. 11. Sadoski was discharged from service on June 7, 1919. He passed away on May 16, 1959 in Philadelphia and is buried in the Holy Redeemer Cemetery. His medal was discovered by Bill Cromedy of Philadelphia. It will be returned to Stephen’s daughter, Mrs. Helen (Sadoski) Mlynczak and his two granddaughters.

The fifth recipient is Sgt. Charles R. Hauger, who served in World War I. Hauger was born in Feb. 1893 to Harry and Sara Leigler Hauger in Somerset, Pennsylvania. He enlisted for service in the U.S. Army on Sept. 22, 1917 and served with Company B, 325th Infantry Regiment, 82nd Infantry Division. He was wounded in action on Oct. 10, 1918. He would survive the war and was discharged on May 2, 1919. He passed away on Jan. 8, 1961. He is buried in the Husband Cemetery in Somerset, Pennsylvania. He had five sons, one of whom died in World War II on March 19, 1945 aboard the USS Wasp in the Pacific. His World War I Lady of Columbia Wound Certificate and Purple Heart were purchased from a collector online. His certificate and medal have been donated to the Somerset Historical Center.

A Purple Heart and Silver Star was returned to the family of Pfc. Waldo Edgar “Bud’ Zimmerman. Zimmerman was born in March 1923 in Mt. Pleasant, Pennsylvania to Clifford J. and Myrtle Riley Zimmerman. After enlisting in the U.S. Marine Corps, he was assigned to 1st Battalion, 18th Marine Regiment (Engineers), 2nd Marine Division. He was wounded in action on July 3, 1944 at Saipan, Marianas Islands. He was also the recipient of the Silver Star, our nation’s third highest decoration. His citation reads as follows: “As a member of a demolition team, Zimmerman, on numerous occasions, boldly exposed himself to heavy enemy fire in order to neutralize the enemy’s positions with demolitions or a flamethrower. He continually demonstrated initiative, daring, and aggressiveness. He and his teammate accounted for approximately one hundred and fifty Japanese casualties. On July 3rd, while advancing on one position in order to neutralize it, he was severely wounded. Zimmerman’s heroic actions and courageous conduct were in keeping with the highest traditions of the United States Naval Service.” He passed on March 12, 2004. He is buried in the Mount Pleasant Cemetery. His medals were recently purchased from a militaria collector online. They will be returned to his nephew, Richard Zimmerman.

The final recipient is the family of Cpl. James Ewing, Korea born on February 1931 in Meadville, Crawford County, Pennsylvania, the first of two sons to parents Alfred Theodore and Eleanor (Finch) Ewing. Ewing enlisted for the Korean War on Nov. 15, 1948, serving in the U.S. Army as a corporal with Company A, 65th Combat Engineers, 25th Division. He served until July 31, 1952. After the war, he worked 24 years as a business manager for WICU-TV Channel 12. He passed June 3, 1999. His medal was discovered by a Mr. Leroy Marriot, who found the Bronze Star in his late father’s effects, also a Veteran of the Korean War. This Bronze Star will be returned to James’s son, Daniel Ewing of Erie, Pennsylvania.

The original Purple Heart, designated as the Badge of Military Merit, was established by George Washington – then the commander-in-chief of the Continental Army – by order from his Newburgh, New York headquarters on August 7, 1782. The Badge of Military Merit was only awarded to three Revolutionary War soldiers by Gen. George Washington himself. Washington later authorized his subordinate officers to issue Badges of Merit as appropriate. From then on, as its legend grew, so did its appearance. Although never abolished, the award of the badge was not proposed again officially until after World War I.

Gen. Douglas MacArthur confidentially reopened work on a new design and by Executive Order of the President of the United States, the Purple Heart was revived on the 200th Anniversary of George Washington’s birth, out of respect for his memory and military achievements, by War Department General Order No. 3, dated Feb. 22, 1932. Today, the Purple Heart is a United States military decoration awarded in the name of the President to those wounded or killed while serving, on or after April 5, 1917. An estimated 1.8 million Purple Hearts have been awarded in our nation’s history. Today, in addition to being awarded to those who fight overseas, the Purple Heart is also given to military personnel who display bravery and valor as prisoners of war and while fighting certain types of domestic terrorists.

We honor their service