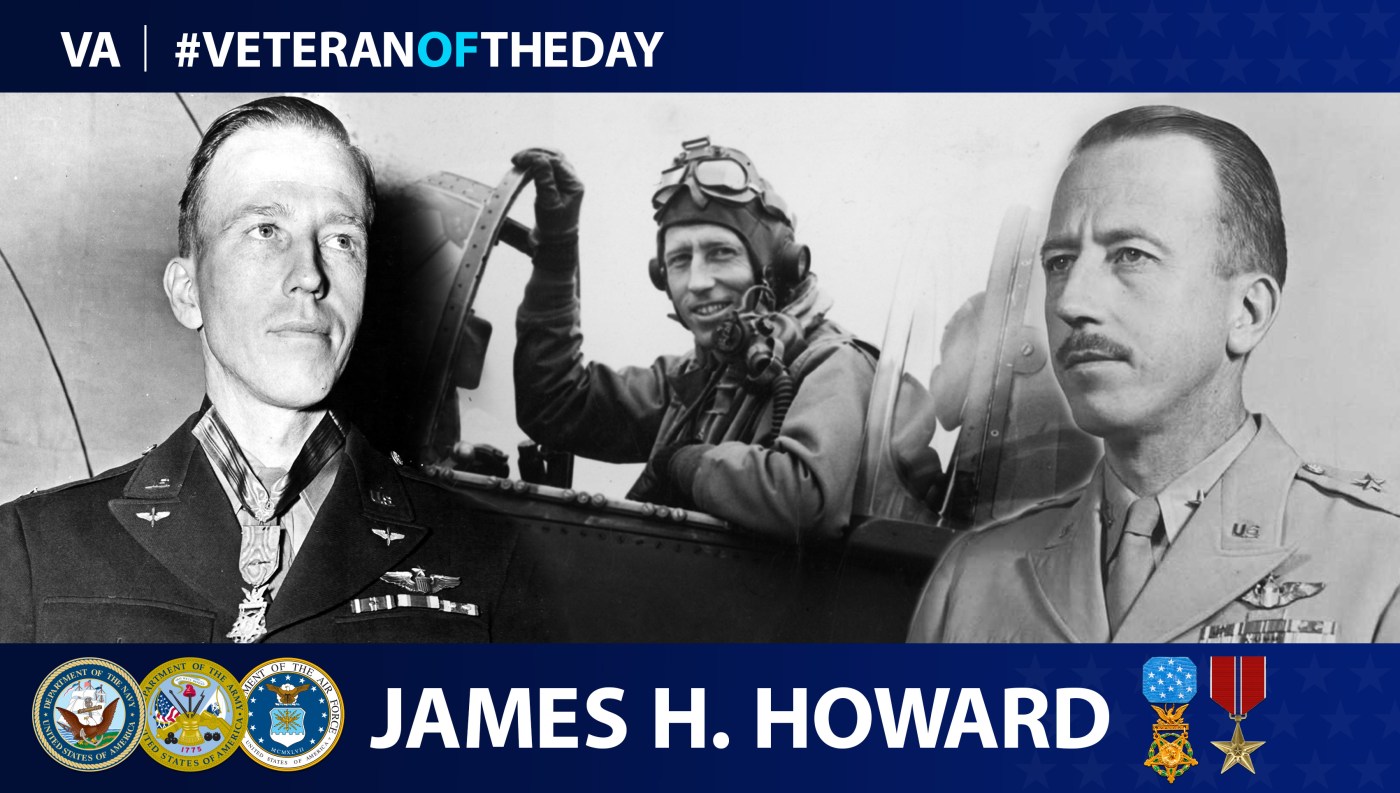 James was born in Canton, China in April 1913. He entered the service in 1938 and was assigned as a Navy pilot on the aircraft carrier USS Enterprise (CV-6) at Pearl Harbor. In June 1941, James resigned his commission to enter the American Volunteer Group called the “Flying Tigers” and fight with the Chinese against Japan. He flew 56 missions in Burma and is credited with shooting down six Japanese aircraft. Once the Flying Tigers separated in 1942, Howard returned to the United States and was commissioned as a captain in the Army Air Forces.

By 1943, James was promoted to major and received command of the 356th Fighter Squadron. On Jan. 11, 1941 James led 50 P-51 Mustangs on a raid against Oschersleben near Berlin, Germany. As more than 30 Luftwaffe fighters attacked the bomber formation, James single-handedly went on the offensive. For more than half an hour, James continued on the offensive against the Luftwaffe despite being separated from his group and his P-51 quickly running out of ammunition. During the exchange, James shot down a twin engine Messerschmitt Bf 110 Zerstörer long-range fighter in addition to a speculated three more German fighters. Upon his return to base, James’s P-51 Mustang bore just one bullet hole.

In June 1944, Lt. Gen. Carl Spaatz presented James with the Medal of Honor, the United States’ highest military decoration. The Medal of Honor was presented for “conspicuous gallantry and intrepidity above and beyond the call of duty in action with the enemy near Oschersleben, Germany, on 11 January 1944.” James is the sole fighter pilot in the European Theater during World War II to receive the Medal of Honor. He was soon promoted to colonel in early 1945.

James’s P-51 Mustang was called “DING HAO!” which translates from the Chinese phrase “ting hao de” to mean “very good” or “number one.” His Mustang was decorated with victory marks from his American Volunteer Group missions, and was lost in combat in July 1944.

In addition to the Medal of Honor, James received the Distinguished Flying Cross twice as well as the Bronze Star Medal and 10 Air Medals. After the end of the war, James served as a brigadier general in the Air Force Reserve as well as the director of aeronautics for the City of St. Louis. James passed away in March 1995 and is buried at Arlington National Cemetery.