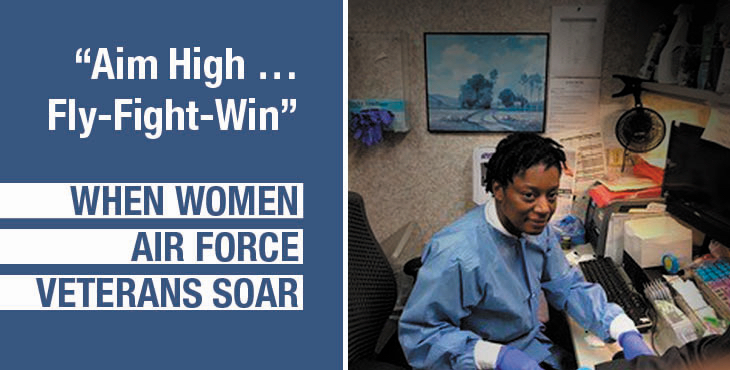 If Constance Hicks were in the dictionary, the definition would be “brave and courageous woman, distinguished by the ability to overcome immense obstacles and succeed in the face of adversity.”

Constance Hicks, a Veteran of the United States Air Force and member of the Air Force Reserve, proudly served her country for eight years. During her military service, she attended Airman Leadership School and participated in phases I and II of the Medical Laboratory Apprentice program, ultimately serving in a medical support squadron. In recognition of her military service, she was awarded the National Defense Service Medal, the Global War on Terrorism Service Medal, and the Air Force Achievement Medal. In 2010, Constance received an honorable discharge.

Upon leaving the Air Force, Hicks moved from New Jersey to Chicago with her three young children to be closer to her family. Her mother graciously took the children in, while Hicks moved from place to place for sleeping accommodations, returning to her mother’s house each morning to dress the children and take them to school. Her first attempts to secure employment resulted only in jobs through temporary agencies, some of which paid less than minimum wage and required commuting to Wisconsin. She barely earned enough to cover living expenses for herself and her children.

Unable to save any money, Hicks feared she would never be able to afford housing for herself and her children. But she didn’t give up. Eventually, she obtained a job at a bakery, where she packed items for shipping; her earnings increasing to slightly above minimum wage. Unfortunately, she experienced recurring pain from an injury incurred in the Air Force, and on one occasion the pain was so severe that she had to leave work in tears. Hicks was also in pain from not being able to live with her children, not having a place to call home for her family, and not being able to find a job that paid livable wages.

Hicks confided in a co-worker at the bakery that she didn’t have a place to live. He connected her with a friend at Heartland Alliance/Heartland Human Care Services, which administers the Supportive Services for Veteran Families (SSVF) program. SSVF helps low-income Veterans and their families who are in need of housing.

Heartland Alliance told Constance about the resources available to Veterans and recommended that she register with the Jesse Brown VA Medical Center, which she did. It was her first contact with VA. Through Jesse Brown, she received:

The results: A place to call home and a new job

The Jesse Brown VAMC determined that Hicks was eligible for the HUD-VASH program —   a collaboration between the Department of Housing and Urban Development and VA that combines HUD housing vouchers with VA supportive services to help Veterans who are homeless and their families find and sustain permanent housing. Through HUD-VASH, Hicks was able to obtain her own apartment and live with her children.

Around the same time, she landed a full-time job as a driver for a para-transit company.  The job paid more but required more hours, including frequent overtime. Hicks worked many 10- to 12-hour shifts and was often called in to work on her days off. The children had to live with their grandmother while she worked.

Hicks’ HUD-VASH social worker, Misa Lopez, referred her to me, the VAMC’s Homeless Veterans Community Employment Services (HVCES) Community Employment Coordinator (CEC). As the CEC, I helped Constance create a federal resume and submit applications for several federal jobs through the USAJOBS website. She found a job that aligned perfectly with her military training, experience, and education — she was hired as a medical technician at Jesse Brown VAMC. Her new position provides her with job security, enough income to support her family, and a schedule that allows her to spend quality time with her children.  Hicks’ management team is very supportive and is encouraging her to return to school to obtain a master’s degree to become a medical technologist. She is truly grateful for the HUD-VASH program and HVCES: “Everyone is so nice. They offer help while treating you with compassion and not pity.”

Constance Hicks may be retired from the Air Force, but she still lives the motto — “Aim high … fly-fight-win.”

About the Author: Beatrice Smith-Redd is the community employment coordinator at the Jesse Brown VA Medical Center in Chicago, Illinois.