Alvin York – Hero of the Argonne 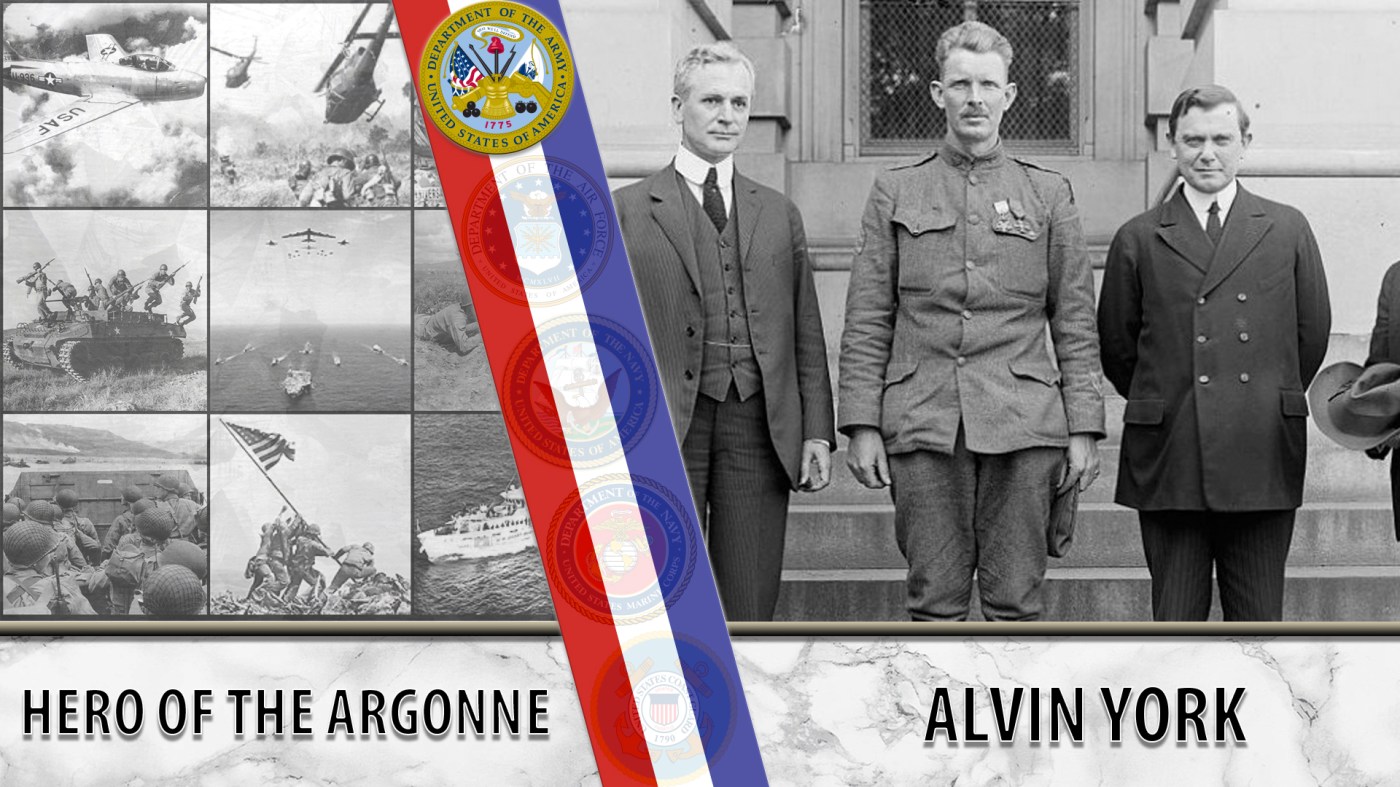 Alvin York was born Dec. 13, 1887, in a log cabin in Pall Mall, Tennessee. Being an extremely rural area, Alvin had a limited education. He helped provide for his family by hunting and working as a semi-skilled laborer, along with his siblings. York’s hunting skills quickly grew and he became a formidable marksman. As a young man, York developed a reputation as a troublemaker who hung around illegal saloons, where he would get into fights. This lifestyle changed when one of his closest friends was killed in a bar fight. The death served as a wakeup call for Alvin, prompting him to embrace religion and lead a better life. After his turn to faith, Alvin quit drinking and as a result – fighting.

When York was drafted in 1917 to serve in World War I, he attempted to claim conscientious objector status, as his denomination, the Church of Christ in Christian Union, forbade violence. However, as this particular Christian sect was not officially recognized by the U.S. government, his status was denied. After basic training, Pvt. York served at Camp Gordon, Georgia, in Company G, 328th Infantry Regiment, 82nd U.S. Army Infantry Division. There he was an oddity: an incredible sharpshooter who detested the concept of war. Later, Alvin’s company commander would convince him it was okay to fight because there were times when war was moral and ordained by God.

The 82nd Infantry Division deployed to France in 1918.

On Oct. 8, now a corporal, York was one of 17 soldiers who were directed to take command of a position in the Chatel-Chehery sub-sector during a period of heavy fighting in the Argonne Forest.

This action was to take place at the start of the second phase of the Meuse-Argonne Offensive. This offensive would become the most decisive allied on the Western Front — lasting until the November Armistice.

York’s heroism resulted in 25 German dead and the capture of 132 more. For this effort, he was promoted in the field from corporal to sergeant and was awarded the Distinguished Cross, which was later upgraded to the Medal of Honor and awarded to him by Gen. John J. Pershing, commanding general of the American Expeditionary Forces. In addition to these honors, York received the Croix de Guerre and Legion of Honor from the French Republic for his heroic acts. After the war, York chose not to capitalize on his fame and resisted efforts to profit off of his newfound fame, instead preferring to return to his quiet life in rural Tennessee where he would go on to raise a family of eight children with his wife Gracie.

Eventually, York would sell his story that would be made into the movie, “Sergeant York,” where he was portrayed by Gary Cooper. The film became a box office success and received two academy awards. The profits York received went toward building a bible school. He also started the Alvin C. York Foundation to increase educational opportunities in his region of Tennessee. Out of this organization, the Alvin C. York Agricultural Institute was created. The institute was initially a private agricultural school and is now continuing its educational mission as a public school for the people of Jamestown, Tennessee.