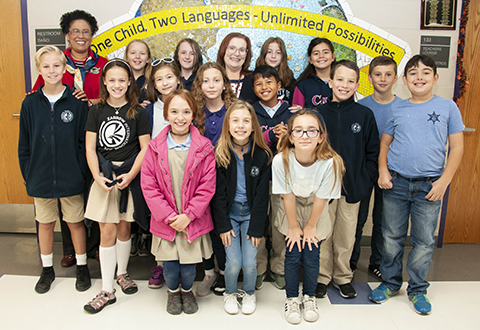 Following a successful campaign, the End Veteran Homelessness Challenge came to a close on Dec. 3. The U.S. Department of Veterans Affairs partnered with the National Association of Elementary School Principals and the American Student Council Association to organize the challenge from October through December 2018.

Student councils in six states competed to collect the most money and household goods to benefit Veterans who are homeless or at risk of becoming homeless. The six participating elementary schools collected nearly $7,000 worth of household items that will help homeless Veterans move into safe, stable housing.

All six schools contributed significantly to this effort, but Henry Zarrow International School in Tulsa won the challenge by collecting over $2,000 worth of items. Close behind, with over $1,500, was Carrollwood Day School in Tampa.

When asked what led to Henry Zarrow’s success in collecting the most donations, Rachel Astacio Haley, a third-grade teacher at the school who coordinated the challenge, attributed it to Principal Denise Marquez’s idea to assign each grade a specific item to collect. After that, the donations started “pouring through the door.”

Together, the six schools collected 881 toothbrushes, 746 pairs of socks, 557 containers of soap and body wash, and 428 tubes of toothpaste.

These elementary schools participated in the challenge:

Upon receiving the news that their school had won the challenge, members of the Henry Zarrow student council said they were pleased to have made a difference in Veterans’ lives. “It makes me happy to know we were able to help [homeless Veterans in Tulsa] at such a young age,” said fourth-grader Megann Halford.

Student council members Avery Starks and Jarek Bargas echoed Halford’s comment. “It made me happy that people who don’t have a lot of things were about to get items they really need, and I felt very grateful that we were able to give back to our community,” Starks said. Bargas added, “It made me happy to think we are making an impact on a Veteran’s entire life.”

Since 2010, the U.S. Department of Housing and Urban Development’s targeted housing vouchers and VA’s programs to end Veteran homelessness have helped more than 600,000 Veterans and their family members avoid homelessness or move into permanent housing. By raising money and collecting household and personal care items, students all over the country are helping Veterans in their transition to stable housing and the next phase of their lives.

Araceli Orona, HUD-VASH Team Leader, detailed to VHA Homeless Programs Office of Community Engagement, joined VA in 2010.  She has 8 years of VA experience developing programs, coordinating partnerships, and providing direct service to Veterans within the Homeless Programs.  Araceli earned a Master of Education from the University of Notre Dame and a Master of Social Service Administration from the University of Chicago.