Anniversary of the flag raising at Iwo Jima 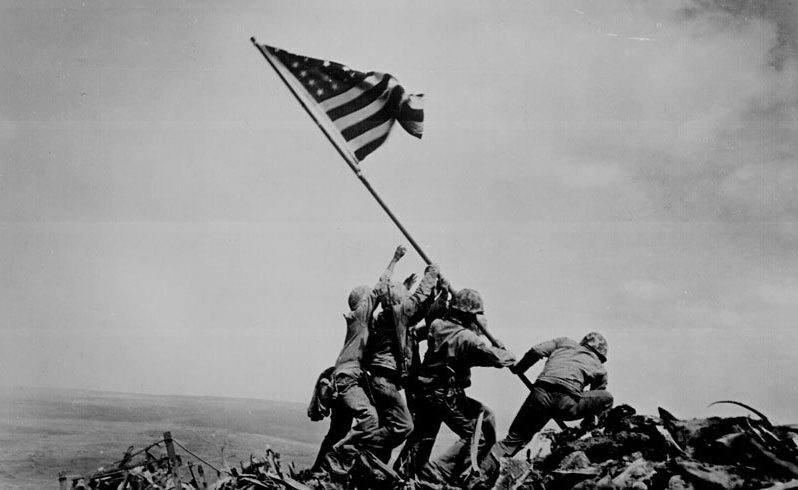 Iwo Jima was a porous, barren, sulfur-scented island, hundreds of miles away from Tokyo, Japan. Yet, for the Marines and sailors who ultimately defeated the entrenched Japanese imperial forces there, it was salvation. The Americans desperately needed the island to gain access to permanent air bases, crucial for bombing campaigns on the Japanese mainland, and critical for an Allied victory in the Pacific theater of World War II.

Indeed, the cost of this campaign was great – 6,800 American service members perished as a result of the fighting. The Japanese forces were prepared for the onslaught, creating extensive networks of caves and tunnels and setting traps for the invading American forces. Despite the fierce resistance, the American troops prevailed, and 21,000 Japanese forces, virtually the entire garrison on Iwo Jima, paid the ultimate price.

There are only a handful of photographs in American history that are so iconic and instantly recognizable. The flag raising at Iwo Jima is perhaps one of the most emblematic and certainly embodied the United States fighting spirit in World War II. On the fifth day of the battle, Marines captured one of the most strategically important areas on the island – Mount Suribachi. A small flag was quickly raised, but it became apparent that a larger flag was needed to send a message to the enemy – the United States will not be defeated.

On Feb. 23, 1945, Associated Press photojournalist Joe Rosenthal quickly grabbed his camera and followed the five Marines and a Navy Corpsman up to the site. On a cloudy, windy day, in an attempt to position himself for a better photograph, he almost missed the famous shot but ultimately snapped it in the nick of time. The three Marines in the photograph, Sgt. Michael Strank, Cpl. Harlon Block and Pfc. Franklin Sousley, were killed in action over the next few days. The other three surviving flag-raisers in the photograph were Cpls. (then Pfc.) Rene Gagnon, Ira Hayes and Harold Schultz.  It should be noted that the surviving veterans took pride in their participation in the flag raising but never chased individual fame or glory.  In addition to their valiant service, for that, they further deserve our respect and honor.

No other photographs produced during the war in the Pacific, and arguably in the entire Second World War, were as iconic and this Pulitzer Prize winning photo. It proved to the world something which the Marines who so valiantly wrestled control of the island from Japan forces always believed in – defeat was never an option, and victory was always going to be the end result. The photograph made the rounds across the United States in various newspapers and provided a unifying message to the American population back home.

About the Author: Albinko Hasic is an attorney, digital analyst, and history graduate student. He is originally from Connecticut.