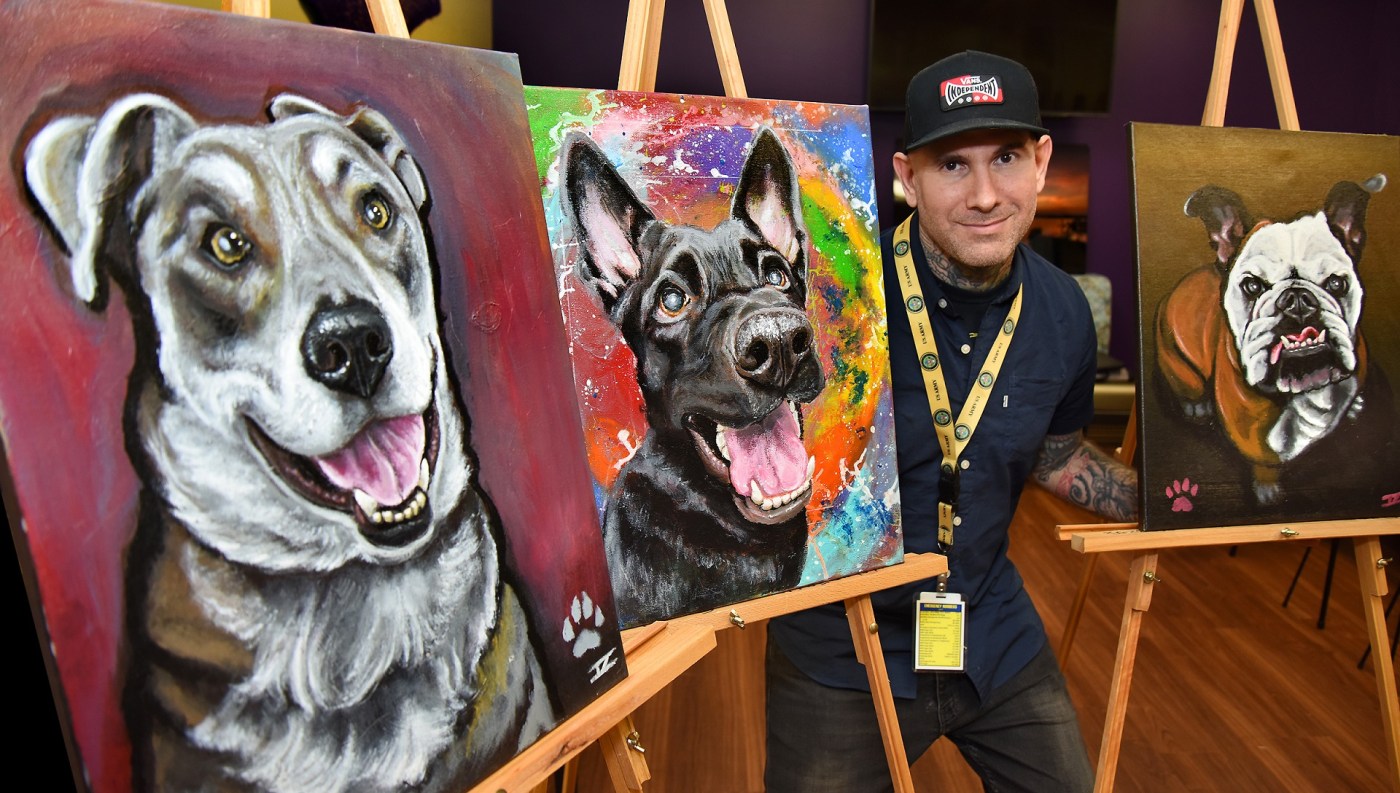 By Issac Zomaya (Sketchin Yo Petz)

Issac Zomaya daubs gently at his past. He brushes along the lines of his survivor’s guilt. He colors through former thoughts of taking his own life.  And he does it all in the visage of other Veteran’s dogs.

A former member of the Arkansas Army National Guard, Zomaya has turned to art therapy through the Central Arkansas Veterans Healthcare System’s vocational rehabilitation program, and as a volunteer with the health care systems’ voluntary services.

His bright face and smart speech mask a past of darkness, guilt and financial trouble. He is quick to explain how medical issues and the suicide of a fellow Veteran and friend brought him to his knees, and how painting and creativity delivered him from the depths of depression.

“I was bed-ridden for about a year and I lost my business, I lost everything and was homeless,” says Zomaya.  “I struggled with survivor’s guilt after my buddy took his life. Then, one day I was about to hang a rope in a closet.”  He looks down, his dark eyes reflecting a momentary sadness.  A question about the dogs he paints changes the mood.

“I paint at least once a week, and, right now, I do it for free,” he says brightly. “It makes me feel good and is my way to get it all out on canvas.”

By Issac Zomaya (Sketchin Yo Petz)

Images of paintings cover his Facebook page, ‘Sketchin Yo Petz.’  A King Charles Spaniel looks happy, an obedient hound stares intently at his owner, a friendly retriever’s bright tongue seems real enough to lick you at any moment.

“I learned through YouTube and books and I’ve been doing this for three years now,” he says.  “I started sketching, then got into drawing and then learned to paint.”

This year, Zomaya put his amazing talent to the test in the health care system’s Veterans Creative Arts Festival, by showing a series of three dog paintings in the acrylic artwork category.  The festival was held Wednesday, Feb. 27 at the Eugene J. Towbin Medical Center in North Little Rock.

Zomaya’s therapeutic artwork earned first place in his category, and the People’s Choice Award at the  competition. His entry now goes to the national level for judging in April, with the possibility of an invitation to the National Veterans Creative Arts Festival in October.

“I feel at peace,” says Zomaya.  “Just because you have a disability doesn’t mean you can’t find ability.

About the Author: Chris A. Durney is a public affairs officer with Central Arkansas Veterans Healthcare System