The ‘Wall that Heals’ visits Texas 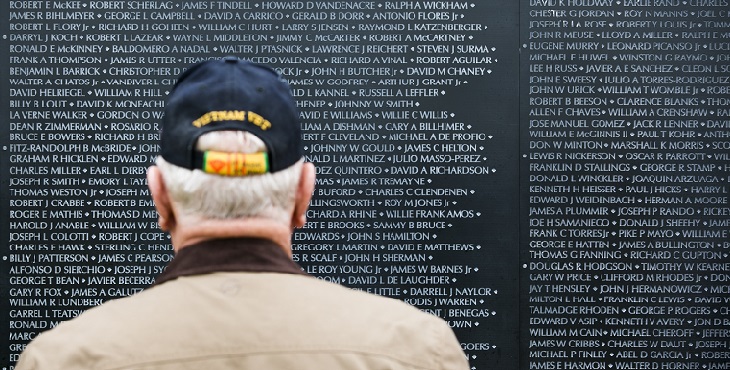 A steady stream of visitors funneled to the ceremonial area of the Ft. Sam Houston National Cemetery on March 1 under an appropriately somber gray sky. A slow procession with some being assisted by wheelchairs or canes, or escorted by grandchildren, made its way to the wall.

The “wall” is the “Wall That Heals,” a 375-foot, replica of the Vietnam Veterans Memorial in Washington, D.C. that made a four-day stop in San Antonio, Texas.

Aubrey David, the director of the Ft. Sam Houston National Cemetery said he was honored and humbled to host such a commemorative event. “I couldn’t think of a better place than Ft. Sam Houston National Cemetery since we have so many heroes laid to rest,” David said. He received great feedback and said this visit was important to bring here because many Vietnam Veterans may never get the opportunity to visit the Vietnam Memorial Wall in Washington, D.C.

The visitors could find their loved ones or use one of the many volunteers that assist visitors with name location. You could see visitors generally amazed at the magnitude of the replica that despite its reduced size, still contains all 58,318 names of those killed or missing from the war. David said the 7 and-a-half foot tall structure is even more impressive at night with its directional lighting.

One Veteran approached differently than the others. He stood stiff, staring forward, at least 30 feet away with hands folded in front of him, motionless and expressionless.

He had good reason for such intense reflection. Navy Veteran Manuel Perez, who served in Vietnam in August of 1970, came to pay respects to someone he lost … his brother Rudy who was killed in 1969. “He was a Green Beret Tunnel Rat,” Perez said. “It has been tough for me because I had a lot of stuff going on overseas, and I never got to say goodbye.”

Perez seemed lost in front of the massive replica because the volunteers could not locate his brother on the wall. “Growing up, we all called him Rudy,” Perez explained. “We have no idea what name he registered under,” Perez said. His anxiety was apparent, clutching his chest and adding a tremble to his voice. With defeated eyes, he left to hopefully find the paperwork that would assist the Wall purveyors with their future search.

The visitors continued their patriotic pilgrimage, their reasons diverse like the age groups in attendance. There were plenty of teenagers looking for grandfathers and instead of the traditional “old school” way of creating an etching with pencil and paper, opted to use smartphones to capture their family’s sacrifice.

Air Force Veteran David Wheless who began his service in 1972 came alone. He always wanted to see the Wall and was going to come and pay his respects. “I think it is great to give everyone a chance to heal,” Wheless said. “It’s important to pay a little respect to everyone who gave their lives.”

A recent class reunion made the visit a little more personal. “A woman that I went to school with told me she had a brother who died in Vietnam in 1968,” Wheless said. “I wanted to see his name.”

After a volunteer guide assisted Marine Corps Veteran Luis Zepeda and his wife Soila to the wall, he maneuvered his scooter to see the name of his good friend Kenneth Fletcher, who he met in basic training and ended up in the same camp together in Vietnam.

Fletcher’s name was at the very bottom of the panel, and the volunteer offered to create an etching of his name. Luis wanted to experience it for himself, so he managed to stand from his scooter and get down on both knees to run his fingers across the carved name. He returned to his feet, made a facing movement back from the wall with military precision and rendered a salute to his dear friend with eyes that were glazed over with tears.

Losing that friend haunted Luis, but with prompting from Soila, they came to the cemetery. “If you want to get straight and forget some of this stuff, you have to come out and see this wall,” Luis said.

Soila smiled with approval. “For a lot of them, it is healing and it is closure,” she said.

They both needed some of that healing as they celebrated their 50th Wedding Anniversary later that evening with family and friends.

Some visitors have been to visit the wall before. Robert and Shirley Otto have been to the memorial in Washington. Robert became distressed while taking a photo of his commander’s name on the wall who was shot down and killed, but his wife said it was nothing compared to D.C. “You cried your eyes out when you went to the wall the first time,” Shirley told her husband. She has witnessed her husband’s evolution from the wall visits, saying she almost divorced him twice because of his flashbacks. She was happy they came and saw it again.

The Veterans, many through tears, enjoyed the wall. Despite not finding his brother the first time, Perez wants everyone to visit when it comes to their area. “This is for all of the people,” Perez said.

David said Veterans were able to exchange stories and some even reconnected with their brothers and sisters in arms. He estimated that the wall had 8000 visitors through the four-day event. Click to see pictures of the San Antonio visit.

About the Author: Steven Goetsch is a public affairs specialist with the South Texas VA Health Care System in San Antonio, Texas.