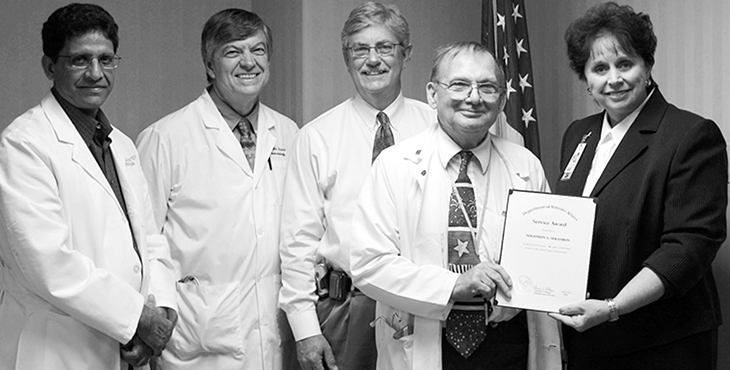 Dr. Sol Solomon, chief of endocrinology and metabolism at the Memphis VA Medical Center, received an award in 2007 for 40 years of federal service.

Dr. Sol Solomon, an Air Force Veteran, has been associated with VA for nearly a half century. He now serves as chief of endocrinology and metabolism at the Memphis VA Medical Center and as an emeritus professor of endocrinology at the University of Tennessee Health Science Center. His focus has largely been on the study of diabetes. He’s authored many papers and has won a series of awards. His most prestigious honor was the 2010 Founder’s Medal Award of the Southern Society for Clinical Investigation. At age 81, he’s approaching the end of his career. But he believes he has time left and hopes to carry on voluntarily by counseling young doctors and physician scientists at VA and the University of Tennessee.

What drove you to military service?

I had a job involving research at the National Institutes of Health. However, I decided that the Vietnam War was my war and probably my only time to serve, so I gave that job up and enlisted in the Air Force through the Berry Plan. One of my ancestors, Haym Salomon, came to America in 1770 and is known as the financial wizard of the American Revolution. He was honored on a postage stamp in 1976. My cousin, Joe Linhart, served in the U.S. Army Air Corps in World War II and flew the Mustang fighter plane. He was shot down over Nazi-occupied France but was rescued by the free French. He and his group later received the Distinguished Flying Cross, one of the highest decorations given by the U.S. military.

“When the Air Force told me I’d be stationed at Ramstein outside of Munich, Germany, I declined because the entire Polish side of my family had perished in the Nazi concentration camp at Auschwitz.”

A number of events inspired my research career. I had polio at age 11 but through some miracle had no paralysis. I was accepted at the Bronx High School of Science in New York, one of the best high schools in the United States at that time. I finished second in my class out of 627 students and received a full scholarship to Harvard before submitting an application. At Harvard, I majored in chemistry and biochemistry and worked with Dr. Konrad Bloch, who asked me to be his graduate student. He went on to share the Nobel Prize in Physiology or Medicine in 1964 for a discovery related to cholesterol and fatty acid metabolism. My father wanted me to get a medical degree instead of a doctorate and put a lot of pressure on me to go to medical school and find a scholarship. I did that, even though I was worried about whether or not we could pay for medical school even with a big scholarship. At the time, we had a grocery store in New York City. In medical school at the University of Rochester in New York, I did research on androgen and estrogen metabolism. This convinced me that my career should be in biomedical research. I was also very conscious of my grandmother, who had diabetes and used insulin. I watched her inject the insulin when I was a little boy. Because of my interest in biochemistry, my history with polio, and my grandmother’s diabetes, I chose to pursue a career in biomedical research.

Service to my country has always been important to me. When I enlisted in the Air Force through the Berry Plan in 1967, the Air Force offered to make me chief of endocrinology at Ramstein Air Base in Germany. That’s because I had been a fellow at Harvard of Dr. Robert Williams, one of my mentors and the author of a major textbook on endocrinology. When the Air Force told me that I’d be stationed at Ramstein outside of Munich, Germany, I declined because the entire Polish side of my family—63 people—had perished in the Nazi concentration camp at Auschwitz in World War II. Instead, I served as chief of medicine at Dyess Air Force Base in Abilene, Texas, from 1967 to 1969. During that time, the medical division at the base received an outstanding unit award.

I’m well-known in the scientific community for my research on the growth of a serious form of diabetes called diabetic ketoacidosis, and how insulin can reverse this disease. I’ve also studied the growth of type 2 diabetes, which impacts how the body metabolizes sugar, as well as insulin resistance. I’ve contributed significantly to the understanding of the role that inflammatory cytokines, particularly tumor necrosis factor alpha, play in type 2 diabetes. In addition, I recently reported on the role that metformin, a drug in the class of biguanides used to treat type 2 diabetes, plays in inhibiting all types of cancer. I initially showed this through a retrospective chart review in patients with type 2 diabetes and prostate cancer. One of my other research accomplishments is that I was chosen to lead an effort to get a medical student research training grant at the University of Tennessee Health Science Center. In 1980, we became one of 11 universities out of more than 130 to get this grant. I remained the principal investigator on this grant for the next 35 years. The grant allowed more than 700 medical students to have a research experience during the summer between their first and second years of medical school. Many of my students have gone on to successful academic careers in medicine, with a few landing major positions in endocrinology and metabolism.

I am pleased as punch to know that my research has touched the lives of so many Veterans and
that I have contributed to treating their diseases and keeping them healthy.

Does being a Veteran give you a stronger emotional tie to the work you’re doing or more insight into Veterans’ needs?

Absolutely, I feel a bond. I always ask Veterans about their military service and thank them
for their service. Being a Vet helps motivate me to give Veterans care and carry out research to
improve and cure their diseases, such as diabetes.

Based on your life experiences to date, what do you believe are the keys to success? What motivational tips would you share?

I would recommend that people work hard, be persistent, and have a sense of humor. As the son of a Polish immigrant who sold food off a pushcart, I subscribe to the immigrant mentality, knowing that in the United States if you’re smart and work as hard as you can, nothing is impossible. That belief has contributed to my drive to succeed and my success. Dedication and focus are also important.

Read other interviews with VA Researchers Who Served.