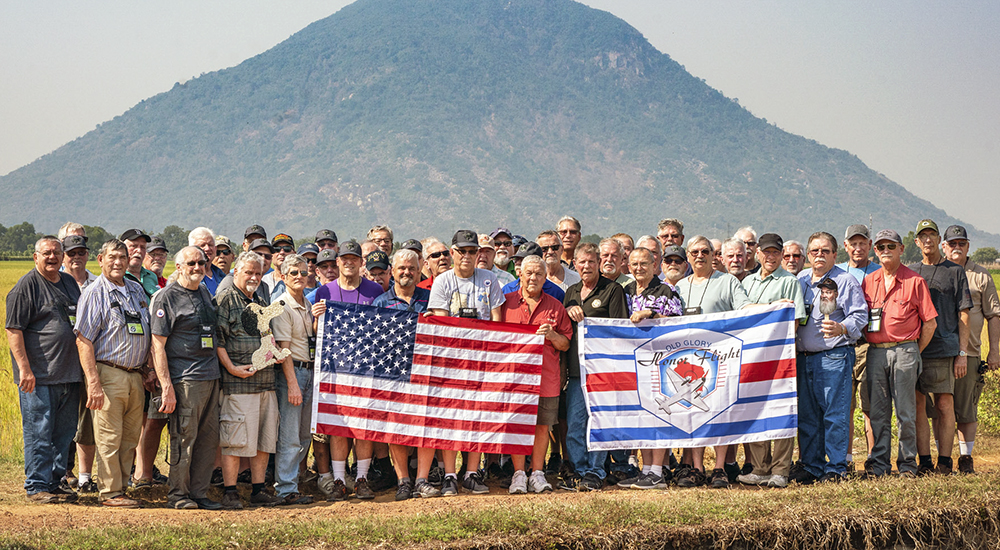 Time may not heal all wounds, but for a group of Vietnam Veterans, it certainly changed the perspective from many angles.

A group of 52 Vietnam Vets from northeastern Wisconsin (pictured above) recently returned for the first time to the country where they fought a half century ago as part of the “Return to Nam” trip organized by Old Glory Honor Flight.

After the two-week trip, they were welcomed home by several thousand enthusiastic and appreciative supporters who braved a mid-March Wisconsin snowstorm to pack the Menasha High School Fieldhouse.

“This reception was unbelievable,” said Tom Van Lanen, a 71-year-old Marine Veteran from Green Bay, who made the trip with his brother. “Everyone was screaming, yelling and hollering, they were waving, saluting and shaking your hand. It was fantastic. Just unreal.”

The warm welcome at both ends of the trip was vastly different from those of 50 years ago.

“It was great, but so much different, a complete reversal,” Van Lanen said. “You’ve got to be a little nervous because it’s been 50 years and you don’t know what it’s going to be like when you go back. It was a big surprise. The change, from the way everything was, it’s more modern, thousands of motorbikes, you might have seen that on TV.”

A capacity crowd at the Menasha High School Fieldhouse welcomed the Veterans back after their trip. (All photos by Jim Koepnick)

The tour group went back to the base camp, about 40 miles south of Da Nang, where Van Lanen had been during the war.

“I was thinking of all the operations that I went on,” said Van Lanen, who spent 13 months in Vietnam in 1968-69. “We did do a lot of walking on the operations. Slept on the ground many nights. I saw quite a few dead bodies of the enemy and some of our own, and that gets to you. It’s tough, it’s tough.”

Van Lanen, who gets care at the VA Green Bay Health Care Center, said the trip was extra special for him because he got to travel with his brother, Dale, who is about a year and half younger, and also a Marine Vietnam Veteran.

When Tom Van Lanen was leaving Vietnam in 1969, his brother was just being sent there. Their paths crossed for just one day in California.

This time, they both spent the trip to Vietnam together.

“We got to room together in the hotels,” Van Lanen said of the Honor Flight trip. “We were on the same bus. They had two buses when we were touring around. It was fantastic.”

Tom Van Lanen, a Marine Veteran from Green Bay, made the trip with his younger brother, Dale, who also served in Vietnam.

For many of the Veterans, the excitement at being chosen for the trip was accompanied by hesitation and anxiety about the unknown emotional reaction.

“Once I knew I was selected, I had some apprehensions about going,” said Dennis Williams, a 72-year-old Army Veteran from Red Granite. “I talked to some of my Vet friends that had been there and they all said, ‘Go if you can, go for yourself, think of us.’

“A classmate of mine was also selected, which was kind of ironic, so after we were selected, we hashed it over a few mornings over coffee and decided we would do it.”

Diane MacDonald, one of the founders of Old Glory Honor Flight, said watching the Veterans bond with and support each other on a trip that was very emotional for some of them, made the year-long planning and fundraising more than worthwhile.

“It was phenomenal,” said MacDonald, who is on the board of the Appleton, Wisconsin, based organization. “It was like taking a step back in time. These Vets are 70 years old, but they were acting like they were 20. Just going back to a place that caused them a lot of heartaches It really gave them a time to reflect and think about what their service meant.”

Although other Veterans groups, as well as individuals, have returned to Vietnam over the years, organizers thought it was the first Honor Flight of any kind to return to the country.

Some of the destinations on the itinerary were Saigon, Mekong Delta (My Tho), Da Nang, Hoi An, Hue, Perfume River, Citadel, Khe Sahn and Hanoi.

“It was nice because when you’re in-country, you serve in a given location and you don’t see a lot of the country,” Williams said. “So, this way, we saw from the south all the way up to Hanoi, and you see a lot of areas that you never have seen before.”

For many, the trip was an emotional roller coaster, but made easier by traveling with fellow Veterans.

“It was a terrible war. A lot of that stuff, it’s hard to talk about,” Van Lanen said. “The way the war went on and what happened. For me, after the war was over, I just put all the memories deep inside my brain and had a hard time talking about it.”

Williams said he probably wouldn’t have made the trip by himself or with another type of tour group.

“I think it was quite healing and therapeutic for some of the guys,” Williams said. “As Veterans do, you all stand behind each other and help each other, so guys that had a few rough moments, when you’ve got your brothers there with you, it helps. I don’t know if I would have gone back on my own, but going with 51 other Veterans was very, very rewarding.”

Van Lanen and Williams each said they were fortunate to return to smaller communities after the war, avoiding many of the anti-war protests that greeted other returning Veterans at the time.

“For me, I was able to wear my uniform all the way home because I came back to the small city of Green Bay,” Van Lanen said. “Being such a small city at that time, there were no protestors, just my family and few other civilians. So, I lucked out compared to the guys who came back to Chicago or some of the bigger cities where a lot of the protesters were at.”

Those sentiments were echoed by Williams.

“It was pretty rough for many, many guys. It was horrible, in fact, for many guys,” Williams said. “One advantage we had in the smaller, rural communities, everybody pretty much knows everybody. You know a lot of people from the neighboring town. When a lot of us came home, the people knew you and they were just glad you made it back.

“Back in the day, with the awful homecoming that many of the guys received, the public I think was misguided,” Williams said. “What those people didn’t realize is that soldiers don’t start wars, governments start wars. We were sent there to do what our country asked us to do.

“But this trip was a wonderful experience for all 52 of us,” he said. “Hopefully, we represented all Vietnam Veterans proudly and honorably.”