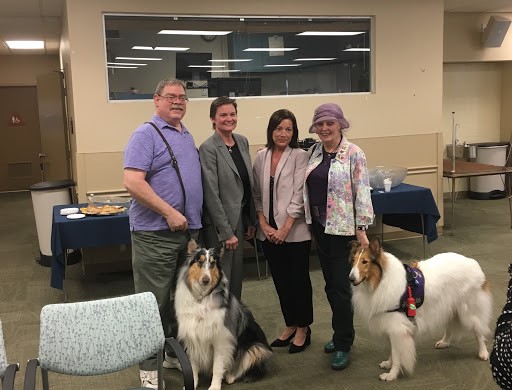 To continue efforts addressing the needs of Veterans in the greater Los Angeles area, the Veterans and Community Oversight and Engagement Board (VCOEB) Federal Advisory Committee met this week and heard from over 30 Veterans in open forum sessions. Comments ranged from housing concerns to organizations being allowed to conduct business on the property of the Los Angeles VA.

“The VCOEB represents love for Veterans and since I have been attending board meetings they have represented nothing less,” said retired U.S. Army captain Robert Kamansky.

The committee is chaired by retired Air Force Lt. Gen. John D. Hopper Jr., a noted advocate for Veterans and their families. Hopper completed 35 years of service as a combat pilot, and is currently CEO of the Air Force Aid Society. While on active duty, he completed two Air Force assignments in the Los Angeles area, including as the commander of Norton Air Force Base in San Bernadino, California, as it prepared to close.

Board Chair, Lt.Gen.John Hopper, USA Ret stated, “I’m excited and humbled to be a part of fulfilling a promise to our Veterans. These men and women have defended our freedom on battlefields far and near, and now it is our turn to provide for them. The Secretary of Veterans Affairs has charged me and my colleagues on the Veterans and Community Oversight and Engagement Board with fostering the close collaboration required between our partners, an already supportive Los Angeles community and our great Veterans. We are working hard and ready for the challenges ahead because success is the only acceptable outcome!”

VCOEB board member Raymond Delgado of AMVETS stated, “I have been engaged in the Greater Los Angeles Campus since 1989 and the board is a good step in the right direction, but the process is taking longer than expected.”

The board will be using the feedback given during these sessions to make recommendations to VA leadership.

For more information on the Veterans and Community Oversight and Engagement Board (VCOEB) Federal Advisory Committee, please visit the Federal Register.