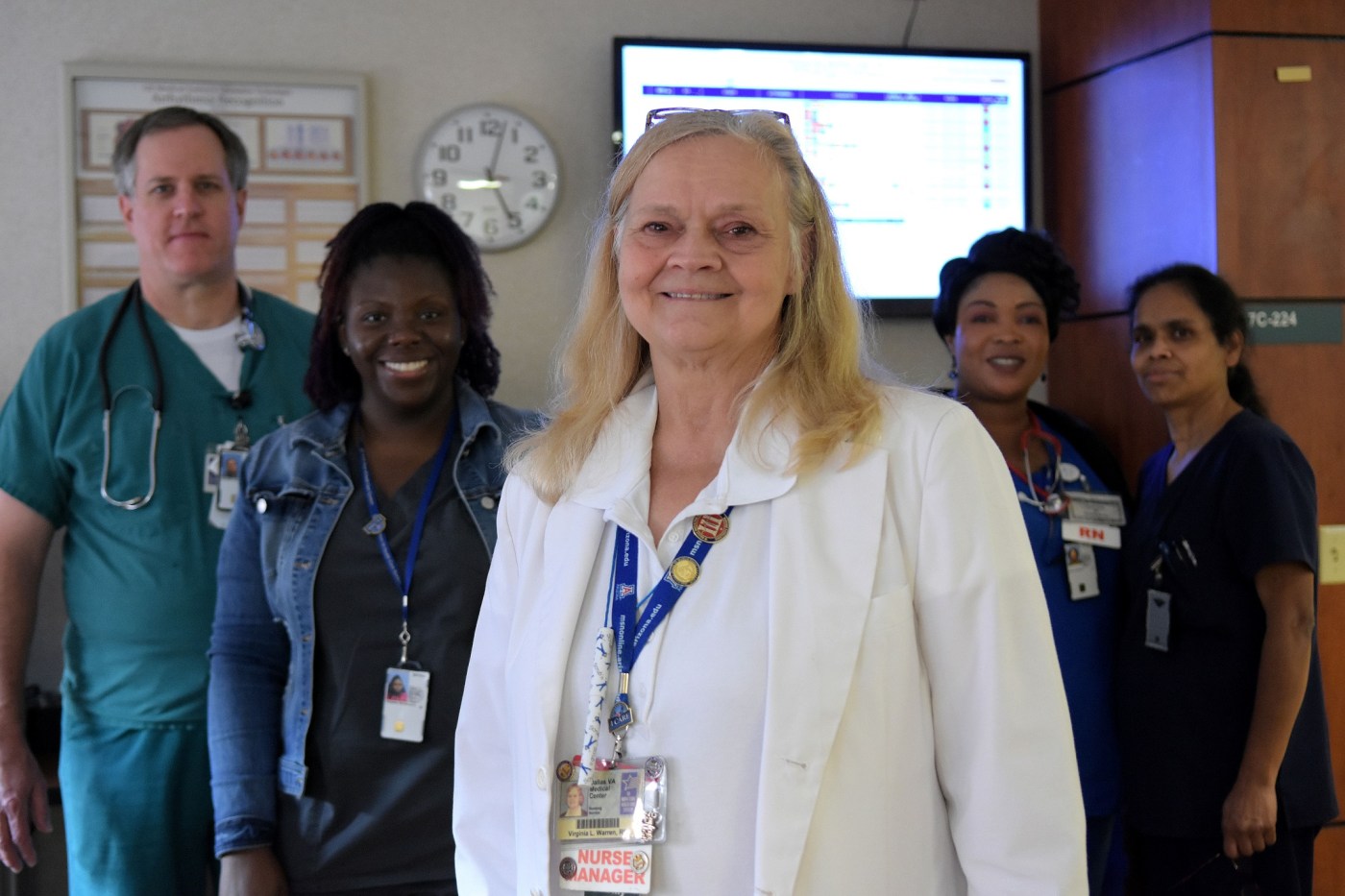 In 1975, with the Vietnam War still fresh in the minds of the American public, most high school senior graduation plans did not include joining the U.S. Army. But for eighteen-year-old Virginia “Ginny” Warren, the North Texas daughter of a cotton farmer, the Army looked like an ideal path. Much to the chagrin of her father, Ginny Warren had just set forth on a 44-year journey from soldier to VA Nurse.

“The Army offered me a way to broaden my horizons and to learn,” said Warren, Nurse Manager at VA North Texas Health Care System.

Warren began her military career with two-years in medical administrative field before spending the next twenty-two years as a medic with the U.S. Army Reserve’s 94th Combat Support Hospital, based in Seagoville, Texas. With a primary mission to take a 150-person deployable hospital anywhere in the world and be ready to receive casualties within 72 hours of arrival, Warren continuously trained for the opportunity to apply her talents while developing a new passion to become a Registered Nurse (RN).

Through her career in the Reserves, the Army sent Warren to licensed vocational nurse (LVN) training and Warren quickly realized she had an aptitude and attitude for nursing. Warren went on to attend the University of Texas at Tyler School of Nursing to become a RN and was subsequently commissioned in the U.S. Army Nurse Corps.

“I had to find my place as a new nurse and new military officer,” said Warren. “I had a lot to learn, but I felt I had a lot to offer as well.”

After becoming an RN, Warren brought her health care experience to VA and joined another family of nursing professionals at VA North Texas in 1997.

In 2003, Warren’s Reserve unit was called upon to deploy to Landstuhl Regional Medical Center to treat wounded servicemembers straight from the battlefields of Iraq and Afghanistan. The ability to muster tremendous internal strength and compassion, coupled with her many years of training to deploy on a moment’s notice, was exactly what the soldiers, Marines and airman she treated would need to make their next journey back stateside to recover with family and friends.

“I vividly remember leaning over this big sergeant, hugging him, and whispering in his ear that it would be okay, and the pain won’t last,” said Warren.

Warren would go on to give more than 40 years in uniform, retiring as a field grade officer in 2015.

With over 22 years of service as a VA nurse, Warren now walks the inpatient wards of the Dallas VA Medical Center where she once served as junior nurse, as a manager and mentor to a new generation of nursing professionals who rely on her expertise and experience to care for many of the 134,000 active patients who use VA North Texas for their health care each year.

“Nursing is not just a career, it’s a passion and a devotion,” said Sheila Wise, VA North Texas Nurse Manager, and herself a retired U.S. Army Nurse. “To bring that passion and devotion to the service of our Veterans the way the Ginny has, and continues to do every day, for as long as she has, makes her an inspiration and a guiding figure for our nursing team. She makes all of us better.”

While eighteen-year-old Ginny Warren could have never foreseen the impact she would have on our nation through her service to military servicemembers and Veterans over 44 years, the nearly 3,000 nurses who apply their skills at VA North Texas are glad that the cotton farmer’s daughter left home to make the journey of a lifetime.

“Nursing has always been where I could pour my heart and soul,” said Warren. “I can’t imagine doing anything else.”

About the Author: Michael Cole is a public affairs specialist with the VA North Texas Health Care System.